One of Mount Pleasant’s newest pizza joints gets the spotlight for this week’s “A Pleasant Slice” because a few people have asked me what I think of their pies and I had yet to try them. Pizza One has pick-up and delivery, and is located in the Stadium Mall on South Mission.

I went the delivery route and was somewhat surprised when I was informed that my one pizza would take 30 minutes to arrive on a Sunday evening—but when I thought about it, when has any place ever delivered a pizza in less than 30 minutes? Nevertheless, the pizza was delivered in 23 minutes: a respectable speed.

I opened the box to what looked like an excellent pizza. It had all the right visual elements—golden brown crust, pepperonis with a crispy edge, and a mosaic of yellow, gold, and slightly browned cheese.

Would the taste match the sight?

I removed the first slice from the box and onto my plate, and I noticed a bit of grease dripping from the corner of the slice. When I took my first bite, the grease was more evident and had a great effect on the overall experience that the pizza provided.

The cheese tasted great, but despite its perfect looks, it was a bit rubbery. As I proceeded to the outer edge of the slice, I noticed that the cheese became more of an ideal consistency; that is, less rubbery. I couldn’t help but assume the pool of grease at the center of the pizza caused the cheese to take on this rubber form.

The pepperoni near the center of the pizza was also saturated with grease—but as I made it a couple bites in, the pepperoni was perfectly cooked. The edges were ever-so slightly crisped with a fully cooked center. The grease strikes again. 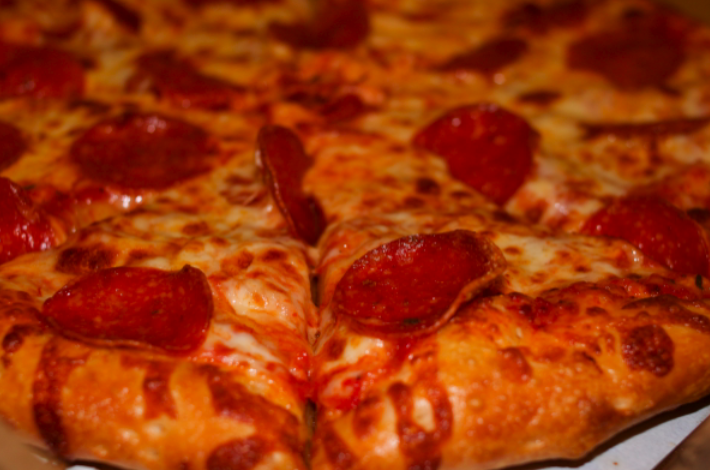 The sauce, however, was wonderful. This usually is not something you can judge by looking at a pizza, but it was distributed very well.

Pizza One has a few different flavored crusts to choose from, so I went with the ‘garlic butter’ flavored crust, and it was fantastic. The looks of the crust were not misleading; the satisfying crunch was greatly complimented by the soft inner dough and garlic butter flavoring.

This is a case of not judging a book by its cover, because what looked like a seemingly perfect pizza had a flaw that turned some of its better qualities around.

The grease was substantial enough to alter both the cheese and pepperoni that it covered. The pizza that wasn’t covered by the grease ranked high in all categories possible.