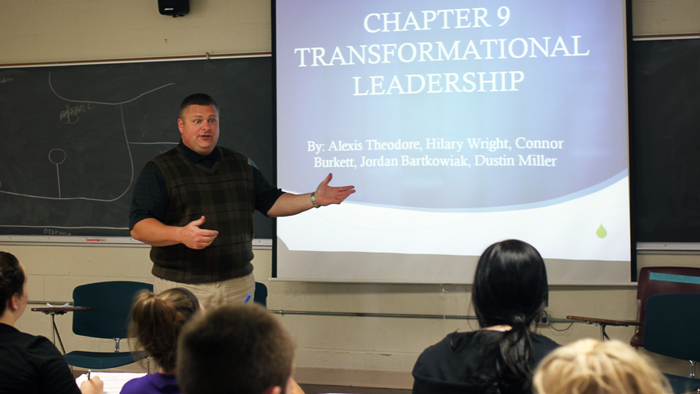 Central Michigan University students know a thing or two about leadership—whether they’ve bounced from session to speaker during Leadership Safari week or had any conversation with a resident assistant—they know this is a school promoting involvement. But CMU’s zeal for leadership doesn’t end with annual programs. The university’s Leadership Minor is based on the premise that students can learn to lead—a concept both intriguing and controversial.

The leadership minor at CMU is dedicated to debunking the notion that leadership traits can’t be taught because individuals are born with those skills. The curriculum focuses on valuable and applicable leadership theories students can use outside the classroom. While the program is still relatively new on campus, the number of students involved has grown considerably in recent years. Leadership is currently the largest minor at CMU and the only leadership minor in the state of Michigan. There are only a few in the country, with the largest program being at Kansas State University.

Discussions of developing a leadership minor at CMU began with the creation of an ad hoc committee in the fall of 1998. The leadership minor was finally approved by Academic Senate on Dec. 13, 2005, and the first LDR minors were signed in spring of 2006. Eric Buschlen, the program’s director, was hired in the summer of 2006 as the coordinator for the leadership minor and still maintains that position today.

LDR 200—the basic leadership class that all LDR minors are required to take—was offered for the first time in fall of 2006. Dan Gaken, the current director of CMU’s Leadership Institute, was a member of the Leadership Advancement Scholarship program in 1998 and remembers the long process of establishing the leadership.

“Originally, I thought I would be getting the minor, but I ended up teaching it the first year instead,” he said. “It was very difficult getting the colleges to support it.”

The minor has found its “home” in Finch Hall, and has since exploded on campus, with about 600 students currently active in LDR course work. Mitch Anderson, a senior from Montague, said that the leadership minor has provided him with a better understanding of how to work with others in a group.

“It really helped to reinforce the leadership skills I already had,” Anderson said.

Buschlen thinks that the leadership minor will help create stronger and more balanced leaders for the future.

Buchlen believes one of the biggest reasons so many students have the leadership minor is because it’s easy to double count classes towards the minor.

“I’d like to think it’s me—but it’s not,” he joked. “It’s the ability to double count classes. Some people only have to take two or three additional classes to earn the minor.”

After taking LDR 200 and the other electives, leadership minors are required to do LDR 402 as their capstone project, which requires 120 hours in a leadership position of their choice. Monroe junior Kara Waldecker chose to do her LDR 402 project at the Henry Ford Museum in Dearborn where she worked in marketing media and special events.

“I’m getting to the point in my class standing where I know what I want to do and where I want to do it and this gives you the freedom to design your own education,” Waldecker said.

But Buschlen acknowledges there is some skepticism concerning whether leadership is truly “teachable.”

“Quite frankly, some people don’t believe leadership is a teachable skill,” he said. “But we have anecdotal and statistical evidence that shows employers value the leadership minor.”

According to a survey sent to leadership alumni, 57 percent of those who responded reported being asked by their employer specifically about their leadership minor.

Of that same alumni group, 95 percent agreed or strongly agreed that the leadership minor added value to their academic major and 75 percent reported they are currently in a leadership role.

“When it comes to applying for jobs, I’m going against a lot of other interns and people with lots of experience,” Waldecker said. “So I’m using LDR 402 as a pre-internship to show potential employers that I have life experience.”

Anderson also believes the leadership minor will help him get a job after college.

“At the very least it’s going to be an easy way to open conversation with an employer,” he said.

“Students who graduate with an LDR minor have a document showing they have formal leadership training which makes them so much more attractive,” Gaken said.