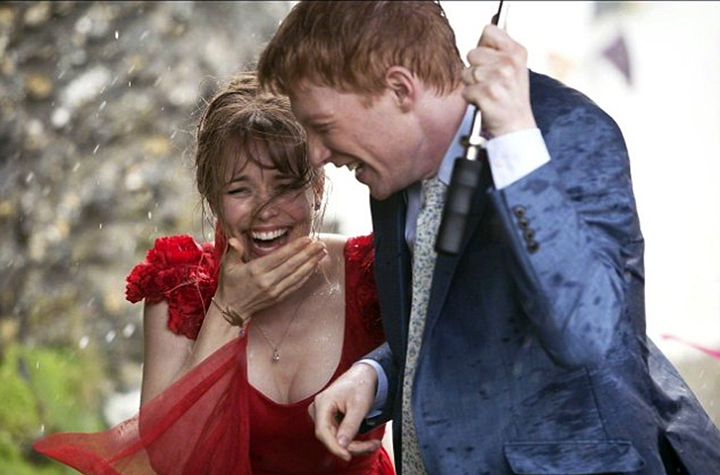 What I thought was going to a be a film similar to “The Time Traveler’s Wife,” turned out to be oh-so-much-more satisfying.

“About Time” brought many tears, laughs and “awws” but I wouldn’t exactly call it a romantic comedy, or an overly sappy chick flick that most would expect.

The film, directed by Richard Curtis, who is also known for “Love Actually” and “Notting Hill” features the lovely Rachel McAdams and what-might-be an unfamiliar redhead to most, Domhnall Gleeson.

The plot dove into itself quickly, leaving little to the imagination to figure out where the storyline was going. Tim, played by Gleeson, is told on his 21st birthday by his dad, played by Bill Nighy, that he can travel back in time. Of course the questions of money and relationships come up, and his dad warns him to use his power for the greater good. “Live the life you’ve always wanted,” he says. And that’s exactly what Tim did.

Sometimes painfully awkward, Tim goes back in time to fix situations he thought could have gone a little smoother. But he also uses his power to help others, even at the cost of his own fate. In one scene, Tim helps his uncle, an aspiring play writer, by going back in time to help one of the actors in his play remember his lines, covering up the mishap that happened during the original play night. His uncle is then named one of the best play writers in London.

But going back in time and doing this act for his uncle caused Tim to lose the moment when he met Mary, played by McAdams, on the original night of the play. Tim then has to wait to meet Mary again, which made for a very funny and awkward scene between the pair when Mary says she has never met Tim before and Tim has to “re-meet” her due to his time traveling.

The film then fast forwards through the life of Tim and Mary, showcasing their love for each other by going through different moments of life, all taking place on the subway in London. It’s quite whimsical.

Tim may have used his power to make everything fall into place with Mary, but his charming behavior and Mary’s patient personality is what connects the two. Although the film sometimes had you questioning how certain people didn’t find out about Tim’s power (only his dad knew), it made it that much more magical. You found yourself rooting for Tim throughout the movie. There are times where you just want to hug Tim and tell him it’s all going to be all right.

Close to the end, the whole theater was filled with sniffles and small laughs. Because that’s what the movie does to you — makes your eyes fill with both tears of heartbreak and happiness.

It’s one of those movies that sits with you. I left the theater with puffy eyes and grabbed napkins on my way out so I could blow my nose. Then once back in my apartment, I started crying again. And the whole next day, it was all I could think about.

While it might look like a lovey-dovey romance chick flick, the meaning of the film is much more than that. It’s about life and how you need to make the most of each and every day. We don’t have the pleasure of being able to go back and fix mistakes. I found myself recommending it to people of all genders, explaining how it will make you really appreciate the one life you have.

Not to mention how incredibly happy-sad it will leave you for days.