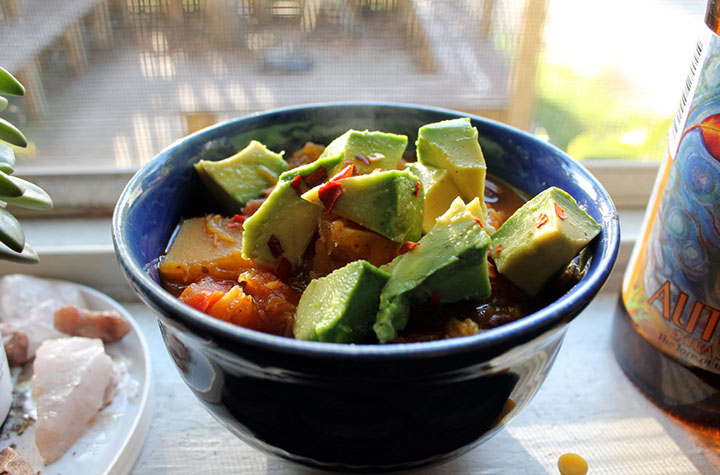 Let me start by saying I am not 100 percent vegan. Being a vegan year-round is a bit challenging and I only lasted one month.

I am not even 100 percent vegetarian. I will be the first to profess my love of a good spinach and feta omelet, and if there’s chorizo involved, I’m there. But every once in a while I sit down to eat a prepared meal and halfway through I realize there are no animal products. Whoops?

The food is just as delicious as foods containing animal products, if not better than a meaty cheese laden meal.

Vegan food also makes your body feel pretty good. There’s no doubt that your body feels better after a light plant-based meal as opposed to something weighed down with meat, cheese or eggs. It’s undoubtedly a healthy lifestyle and a fun challenge.

If you get anything out of this bi-weekly column, I hope it’s a taste of the benefits of eating vegan every once in a while. Play around with this recipe and if you don’t have a certain ingredient, substitute it for something else. Food is fun, and experimenting is essential.

Butternut squashes are intimidating. I purchased one at a farmer’s market for a whopping $1.25. It weighed at least 2 pounds. I wouldn’t recommend biking home with a gourd the size of your head in your backpack. It’s just not fun.

What I would recommend is making soup with this gourd, chili to be specific. In my book, fall is essentially chili season. It’s freezable, it’s quick, it’s healthy, and almost everyone likes it.

Before you tackle your squash, read this. I near threw the thing out the window before I remembered that the Internet could solve my squash issues. Afterwards I returned to a state of gourd peeling bliss, sort of.

1/2 tablespoon of chipotle in adobo

1. Chop up your veggies as big or small as you like, and throw them in your biggest saucepan with olive oil. Cook half in the pot and half in a pan if you don’t have enough room.

2. Once the onions start to cook and get clear, add all your spices, tomatoes, rinsed beans and broth into the pan.

3. Cook for about an hour, until the squash is soft. Once it’s to your liking, chop up some avocado and put it on top with some tortilla chips, if you’d like. Also feel free to add some chili pepper flakes to the top if you’re into that sort of thing.

Also, feel free to try chipotle peppers in adobo sauce. It sounds a lot more exotic than it is. I found it at Meijer for less than $2. It’s chili peppers in a sauce. It’s a smoky flavor comparable to a Mexican style barbecue sauce. Start with a half-tablespoon and if you want more go for it. Whatever excess you have, put in a plastic bag and throw it in the freezer until the next time you remember it’s there.

This recipe makes enough soup to feed an army. Freeze it, serve it to your mother and friends, or give it to unsuspecting strangers.