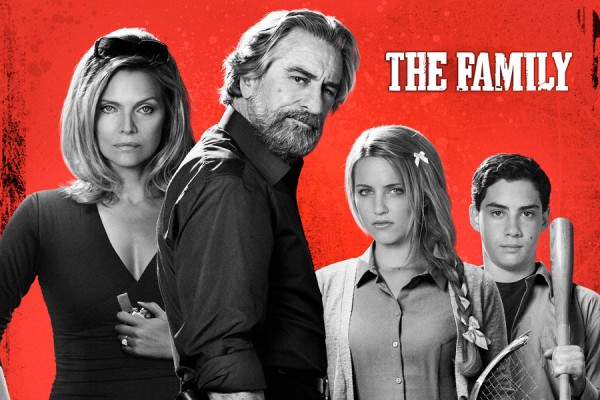 “The Family” was close to being good. After all, you have Robert De Niro in a role that he’s actually halfway awake for (which is a plus), in the kind of mob role he made legendary.  Some black comedy is also present without feeling overly schticky or falling too much into parody.

You have Luc Besson, a director who is not known for his subtly but can most definitely direct a scene or nine. The premise, in which a violent mobster and his family are in the witness protection and move to Denmark where, of course, the mobster’s old buddies try to off him. It could have spawned an interesting film and almost did. Well-made, effective scenes are present, but too many other sequences are marred by tonal confusion and ridiculous plot points (not necessarily in a good way, it’s worth noting). There is about half a good film here.

Giovanni Maznoni (De Niro) is a former heavyweight gangster who went into the Witness Protection Program with his family, complete with wife Maggie (Michelle Pfieiffer), daughter Belle (Diana Agron), and son Warren (John D’Leo). Because this a family of violent sociopaths — and admirably, the movie makes few attempts to hide that — besides Giovanni’s constant desire to let his guilt and pain out while still beating people halfway to death, the moving game is played a lot, and this time the “Blake” family has landed on the Normandy space.

The clan tries to keep busy in this new town, while moving toward the inevitable mobster showdown, Giovanni finds a typewriter and tries to alleviate his guilt by “getting his story out there.” Maggie hangs out at the local church when not blowing grocery stores, while Belle finds her one true love in the form of soulful-eyed substitute teacher Henri (Orisin Stack). And Warren, a 14-year-old and an apparent intelligence-gathering master, creates his own organized crime ring within his new school in a matter of days.

It’s all fairly ridiculous, but the performances keep you interested enough to deal with the abrupt tone shifts. The beginning starts out as a semi-black comedy, but not enough jokes work to give the violence a comedic edge (Giovanni explains why he isn’t such a bad guy over scenes of him dunking people in acid).

Most of the last act devolves into an absolute bloodbath, and if the comedic/violent tone that the film had been trying to establish had actually worked, this would have felt like a natural progression. Instead, the film’s transition from mildly comedic to deadly serious feels abrupt.

Certain portions have perfect energy, like when Belle corners her would-be Prince Charming. Agron, with looks straight out of a ’40s noir film, does well as a burgeoning psychopath who treats love with such a hunter’s intensity that her all-or-nothing, life-or-death seriousness gives actual stakes to how many teenagers actually approach their social lives.

Nearly every scene that focuses on D’Leo soars. Warren feels like a mini Don in training. He’s getting dirt on people, wheeling and dealing, using violence when he feels necessary. D’Leo  feels a younger version of a supporting Godfather character. He’s learning the ropes and trying to be like his tough old man — he truly feels like a kid who would be the soon of a Robert De Niro character.

Up until about the last half, Pfieffer has about the least to do but, overall, she nails the role of the mob wife who is caught up in her husband’s life but still genuinely loves him enough to deal with it.

Despite this, there are many problems. Tommy Lee Jones has little to do as the FBI agent who keeps De Niro in line. A series of inane, string-thin coincidences bring the Blake family to the attention of Giovanni’s old associates and one character survives an explosion that they definitely shouldn’t have. But the attempt was made: A miss, but not by much.