From the stadium to the classroom and to their very own rehearsal field, the CMU band students always bring an energetic culture. Consisted of more than 250 students, the Marching Band performs at Central’s football games and travels with the team to bowl games. 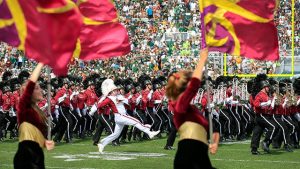 The band is directed by Dr. James Batcheller.

Each member of the marching band shares a great pride for the university; an inner fire to be a Chippewa.

Junior Ruth Gazetti plays the clarinet for the Chippewas.

The last few years as a member, Gazetti enjoys hyping up the crowd and has had a commitment to playing since high school.

Gazetti also said that during one game they performed, the field reached 112 degrees. The band has also performed during hail.

Practicing at their own ‘Jack Saunders Marching Band field,’ the band spends countless hours of their time practicing to perfection.

If you’re interested in seeing some of the band members perform, the 6th man band (pep band)  performs at every women’s and men’s basketball games.