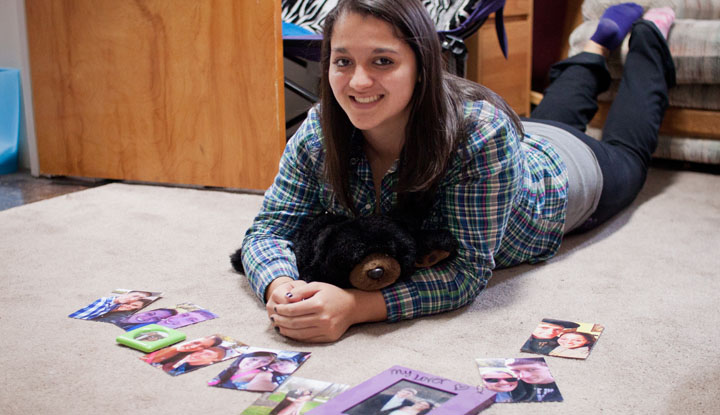 Relationships come in different forms and while on the outside looking in it may appear one relationship is more unique and satisfying than the other, it varies for each couple. Freshman Bailey Perry, who was previously in a long-distance relationship, found it to work fairly well for a while but they eventually broke up.

“In the beginning we kept it very casual,” she said. “It sucked not being able to see each other, but it was still great because I’m not a super clingy person and liked my distance, so it was the ideal situation.”

Perry and her boyfriend stayed in touch via text and FaceTime phone calls every day. She also went home on the weekends but said it was hard not being able to see each other any time they wanted to.

Junior Maria Haugen said it can ease worries and doubts the other may have.

“My first long-distance relationship was my freshman year,” she said. “I had been dating somebody for around two months when I moved up to school and the first couple of weeks our relationship remained the same.”

Haugen and her boyfriend, who lived two and a half hours away, were in constant contact with each other. As the year went on, Haugen said it became more of a chore to keep in touch.

“Phone calls became shorter and less personal,” she said. “We didn’t Skype because of our schedules and of course going to CMU gave me more of social life than he (had).”

Haugen said being in a relationship doesn’t mean being at one another’s side 24/7 but going months at a time without seeing one another can make it hard to be happy.

“You start forgetting the little things you really like about them because you aren’t there to experience them anymore,” she said.

Sophomore Gabrielle Stuart agreed with Haugen and said people sometimes take advantage of the little things when couples have been together for a long time.

“Those little things take on a whole new meaning when you go without them for so long,” she said.

For freshman Kyle Bricknell, it has been easy to keep a balance of communication with his long distance girlfriend.

“Every morning I send her a good morning text and remind her how beautiful and perfect she is,” he said. “I do the same at night and she always compliments me, too, and tells me how much she misses me, so that gives me hope that things will continue.”

When it comes to any relationship, whether it’s long distance or not, or in the process of beginning, there is important advice that should be followed, freshman Ottorino Schincariol said.

“My advice is to not be too overbearing and allow your partner to have their own time,” he said. “But always make sure you set aside some time for each other throughout your busy week. Skype is a life saver and I really applaud people who in the past kept their long distance relationships alive by only sending letters.”

Schincariol also said it’s very important to be completely honest with each other before you decide to begin a relationship. Students can sometimes forget they have their whole lives ahead of them and don’t need to take things too fast.

“If this is The One then don’t rush everything before or during your relationship,” he said “Cherish the time spent together.”

In the end it’s up to both people in the relationship to work to keep the spark alive. School, work and life in general can put a strain on a relationship, especially when it’s long distance, but it is manageable.

“I believe that any relationship has the ability to be strong, long distance or not, if both parties truly love each other and are willing to work hard to make things work,” Stuart said.