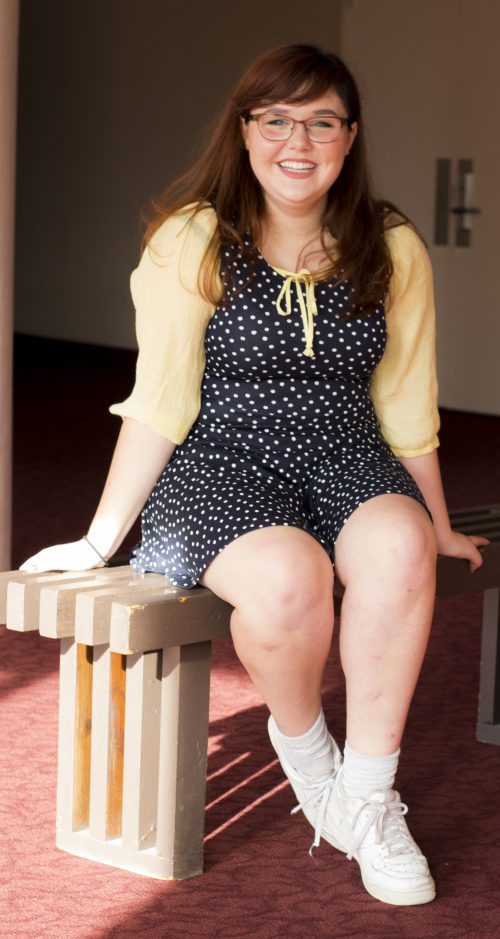 Her one-act play, “Sunshine Blind,“ was chosen to be performed as part of the Central fall play lineup. Harig herself is a Technology Theater major and participates both onstage and behind the scenes in various CMU theater projects.

The play was selected by Junior Zach Guerra who will also be directing the show. These student-written plays are used as an opportunity for aspiring student performers and stage technicians to gain some experience putting a show together with little assistance from the faculty.

The progress of her show’s transition to stage has been positive as Guerra has allowed Harig to sit in for callbacks. However,  Harig finds watching actors perform her show to sometimes be “torture,” due to the fact that she’ll notice errors in the show that the audience might not see.

When the winners for this contest were announced, Harig was nervous about whether her show would be selected.

“When they announced the show last year I remember looking at the ground and being like, ‘Act cool, act cool. It’s no big deal if your show doesn’t get chosen,'” Harig said.

The general plot of “Sunshine Blind” follows four characters. It revolves around the character Ashton, who is in love with a girl named Molly, who is dating Eric. However, Eric passes away in the beginning of the play and Ashton begins to see Eric’s ghost.

“Sunshine Blind” is Harig’s first written play. She says the idea initially came to her while she was in high school. At first, she tried making it into a short story and novel, though her story didn’t seem to work in both writing forms. But when Harig heard about the contest, she decided to try writing it as a play.

“I finished the final scene five minutes before it was due and didn’t even have a chance to edit it,” Harig said. “I also cut the part of the play that adds context to the play’s title.”

Harig says she writes because her head is filled with ideas for stories, books, and plays, and she just wants to see them play out. She says she also writes because whenever she speaks she feels that she might miss social cues, pronounce words wrong or just say the wrong thing but when she writes, she gets a chance to think before putting her words out there.

“Sunshine Blind” will be performed November 16, 17 and 18 at the Theater-On-The-Side in Moore Hall.

“Having my show get put up is just crazy for me. It’s really amazing and I’m extremely excited to see it,” Harig said.