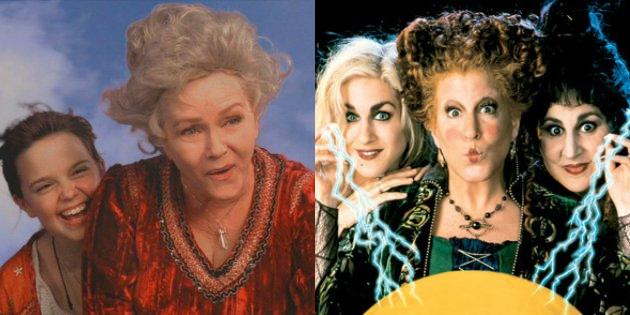 Halloween is an awesome holiday for every age, but it is special for kids. Picking out a costume to go trick-or-treating and planning the best route to get the most candy are really once in a lifetime opportunities. As college students, we do not celebrate trick-or-treating anymore, but this does not mean we can not relive some of our childhood memories.

For this week, Battle of the Bucks walks down memory lane with two classic Halloween Disney movies: 1993’s “Hocus Pocus” and 1998’s “Halloweentown.”

“Hocus Pocus,” (for those who haven’t memorized the plot) begins in colonial Salem, Mass. with Thackery Binx (Sean Murray) trying to save his sister Emily (Jodie Rivera) from the three evil Sanderson Witches (Bette Midler, Sarah Jessica Parker and Kathy Najimy). Despite his efforts, not only do the sisters suck the life out of Emily in order to regain youthfulness, they cast a spell that transforms Thackery into an immortal cat.

The townspeople hang the witches, but not before they cast a spell that would allow them to come back to life if a virgin lit their candle on Halloween night. Poor Binx uses his immortal cat life to make sure no one lights the candle and is successful for 300 years.  He is successful until Max Dennison (Omri Katz), a new teenager in town, tries to impress his crush by lighting the candle. The witches have to suck the life out of children before the sun is out to remain alive and it’s up to Binx and the three kids to stop them. They are eventually successful and Binx gets to die and be with his sister finally (so sad).

Watching “Hocus Pocus” again as an adult, I remembered why I love it — though I have no idea how all the blatant sexual references went over my head. Even more mysterious is how I didn’t realize until now that Sarah — the dumb blond Sanderson sister — was played by Sarah Jessica Parker (before her “Sex and the City” debut).

One of the most recognizable Disney Channel original movies, “Halloweentown” lives in the hearts of many 90s kids. It made us all hope that we were all secretly witches and warlocks. The story follows Marnie (Kimberly J. Brown) and her siblings who never understood why their mother did not allow them to celebrate Halloween. The only thing that lightens up their mediocre holiday is a visit by their fun-loving Grandma, Aggie Cromwell (Debbie Reynolds).

After realizing that she is a witch at risk of losing her amateur magical powers, Marnie and her siblings sneak onto the bus that takes their grandma to the magical world she lives in called Halloweentown. While the children are in Halloweentown, an evil force is taking over the citizens. Eventually the evil force freezes the mother and grandma, leaving the three children to defeat it. The family eventually defeats the villain and Aggie moves in with the kids in the human world to continue Marnie’s witch training.

It kills me to say it, but looking back, it is unbelievable how incredible cheesy “Halloweentown” is. The costumes for the different creatures of the town look like they were purchased at a dollar store. The three kids and the mom I found to be incredibly irritating. Throughout the entire movie, I couldn’t believe this was the one of the movies I looked forward watching every Halloween. As most 90s kids will attest, the many sequels of “Halloweentown” really cheapen the movie’s legacy. Overall, this walk down memory lane was a bit disappointing.

In the battle of the classic Halloween-themed Disney movies, “Hocus Pocus“ is the winner. As of Oct. 14, both movies are available for free on Youtube. Besides that, “Halloweentown“ is much harder to find simply because it was a made for TV movie and not released in theaters.