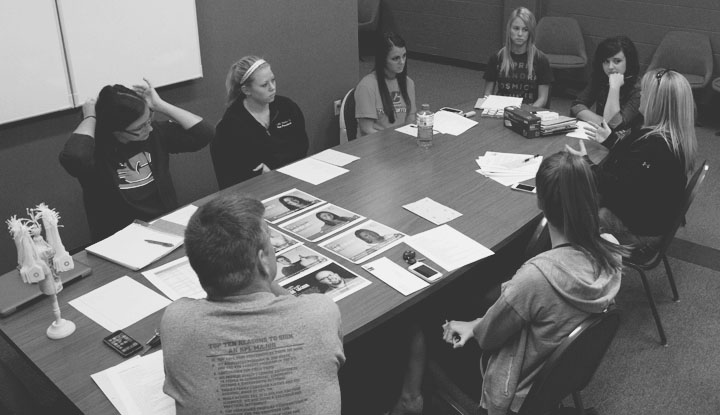 Normally, Threads, the student-run fashion show, is only in the spring. This year, it’s going bigger, and allowing students to get creative and plan Central Michigan University’s very first Threads “Best of the Best” fashion show.

Faculty member Timothy Otteman of Recreation Parks and Leisure Services worked with other faculty members to help create a board of seven students to plan the event. The fashion show will take place from 7 to 9 p.m. on the first floor of the Educational Health Professions building on Saturday, Oct. 26.

“What we wanted to do was make this an intimate fashion show; not when you’re sitting in a chair a long way from the stage and they’re just running the catwalk,” Otteman said. “They literally are going to come down the grand staircase here in the Educational building and make a loop in the entire building.”

During the 45-minute show, Otteman said spectators would be as close as two or three feet away from models, as they strut in designs from current or alumni Threads designers. Beverages and gourmet desserts will also be served to each table.

The seven students were chosen over the summer to be part of the committee for planning the event. Students interested in being on the committee had to send in a resume and write an essay explaining why they should be chosen.

Dr. Carol Beard, one of the faculty members working with the Apparel and Merchandising Department, decided to get involved in the event, reaching out to people she thought would be interested in the event on a Facebook group page involving Threads students.

“I indicated what we were going to do, what it was going to be like, what the opportunity was for them, what I felt the benefit for their career and resumes would be and students volunteered to participate,” Beard said. “I also contacted alumni I felt were close enough to be able to participate.”

Senior Kortney Watts was one of the students chosen to be part of the committee. Watts is in charge of making the program, anything involving graphic design and creating the designer biographies for the event.

Watts said before working with the committee, she never realized how much goes into putting on an event.

“You have to literally think of everything that could go wrong,” she said. “And then you have to think of little things like ‘Are there drinking fountains?’ ‘Are there bathrooms?’ ‘Can they use the stairs?’ Little tiny things I would have never thought you had to think about is probably the biggest thing I’ve learned.”

The fashion show is open to students, but the main audience will be women in the Mount Pleasant community.

“I think sometimes the general public, being alumni and the community, don’t really have a full grasp on how talented our students are and this is a chance we get to illustrate those skills,” Otteman said. “And so, from the designers to the models to the event programmers, this is really their one chance for the given semester for them to be able to do it and I think people are going to be blown away if they get a chance to come and see it.”

There will be 15 designers involved in the fashion show. Most of the designs that models will strut down the runway are from last spring’s Threads show. However, some designers have worked on new designs that will be seen as well.

Junior Alexandra Rudolf is on the committee and is in charge of decorating. Rudolf had to work with different pieces of furniture in the EHS building and decorate according to a theme. The theme chosen was a “collected industrial feel” since the EHS building gives off a modern vibe.

Rudolf said her biggest challenge while working on the fashion show was working with the different color furniture.

“It’s definitely been a big challenge to make it flow properly,” Rudolf said. “So people think it looks collected, not goofy. There’s definitely a fine line that we’re trying to not hit.”

Senior Allison Krupp will be the emcee of the event. Krupp said she is a bit jittery due to the fact she’ll be speaking to a large group of people and not a classroom of students.

“I am nervous about it, but they’re giving me a script to read off and I’m a communication major, so it’s not going to be very hard,” Krupp said.

After the show, there will be a silent auction of health and beauty products for women and a meet and greet with the designers and models.

“A purchasing ticket holder will get a chance to go in there, get a chance to talk to the designers, see the models, kind of touch and feel the fabrics, which is just a new way to think of a fashion show,” Otteman said.

People will get the opportunity to donate cash or appropriate business attire to help support First Lady Mrs. Ross’ “First Impressions” nonprofit clothing store, which helps students who are in need of professional wear.

Watts said she is excited to see how it all plays out and said it would nice if the event happens every year.

“It’s just a great experience all around, regardless if it does well or not,” Watts said. “Getting to say I could be part of something like this was huge.”

Tickets for the event are $30 and a limited quantity are still available.