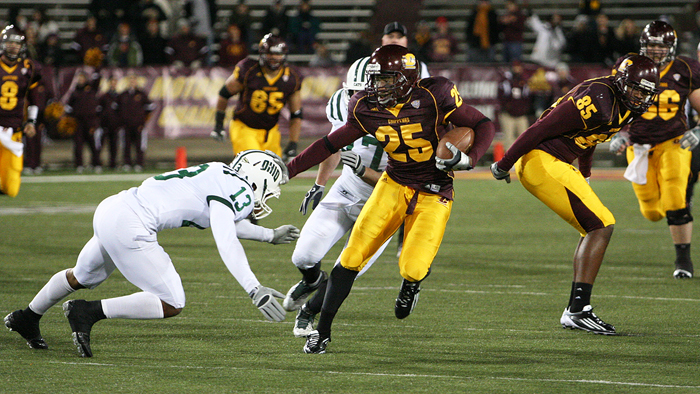 Dan Enos sat in the press room disgruntled and frustrated after his team suffered a 43-28 loss at the hands of the Ohio Bobcats on Nov. 10. The loss was as cold and bitter as the weather was. As brutal as the game had been, all was not lost—a diamond in the rough had emerged.

Central’s hope once again rests in the hands of the youth. Freshmen receivers Titus Davis and Courtney Williams are directly connected with the success of the Chippewas in the coming years and have looked impressive when called upon this season.

Running back Ben Brown and tight end Caleb Southworth, both freshman, will also have to fill their respective roles in the coming years—but all these young men are still freshmen and fans need to realize that.

It was quite easy to see the flaws of the young Chippewas on that cold Thursday night.

“They [Ohio] rushed for 300 yards and we dropped about 12 passes,” Enos stated bluntly.

Most of the drops came from Davis and Williams, who both had heavier workloads due to the fact that star wide receiver Cody Wilson was inactive.

Davis responded early in the game with a 13-yard touchdown on the Chips’ third drive. Williams would also get off to a great start in this game. With 2:20 left in the first half, Williams caught a pass at the 5-yard line then took at least three Bobcat defenders into the end zone with him.

Junior wide receiver Jason Wilson also had an impact in the first half, grabbing two passes for a total of 18 yards. He was Ryan Radcliff’s security blanket in the first quarter.

Sophomore tight end Connor Odykirk also had to step up early when David Blackburn went down in the first quarter with a possible ankle injury. Odykirk would deliver on one of his first plays, grabbing a pass from Radcliff and breaking tackles to make it a 19-yard gain.

Sophomore cornerback Leron Eaddy made a spectacular interception halfway through the first quarter, as he was able to catch the ball after it bounced and rolled off the back of an Ohio player for his first career interception.

The second half would truly show the youth of the Chippewas and unfortunately this time, it wasn’t positive.

“I knew this day would eventually come, they’re freshman. I just didn’t expect it to happen all in one night.” Enos said.

It was as if the proverbial switch had been turned off—Central wide receivers dropped almost every pass thrown their way. The lowest point occurred when Williams allowed a pass to bounce off his chest and into the arms of Ohio cornerback Travis Carrie. It was not until the fourth quarter that the young Chips were able to bounce back

“That’s going to hurt us, those drops, but I got to take responsibility for that too,” Ryan Radcliff said. “It was good to see that they came back and kept playing.”

It was as if a weight had been lifted as the Chippewas started to make catches again. Early in the fourth quarter though, tragedy struck again. Just as Williams was heating up again, he injured his leg making a catch that set the Chips up at the 1-yard line. When asked what he knew about the injury Enos said, “[It’s] not good, but we don’t know for sure.”

Central would take advantage of the great field position as sophomore running back Zurlon Tipton powered in for a Chippewa touchdown. The last Central score would be delivered by Davis on a 16-yard catch.

Though the Chips went on to lose 43-28, morale was still high.

“No one’s happy right now, but at the same time we have Toledo next week and we have to finish off the season with a win.”  junior Jaheel Addae said.

The present does not look good for the Chippewas, but the future is bright. Central’s youth dots the starting lineup now but as time goes on, the excellent freshmen will turn into outstanding upperclassmen. How good will the Chippewas be? Only time will tell. But from the looks of it, Mid-American Conference championships may be within Central’s grasp.