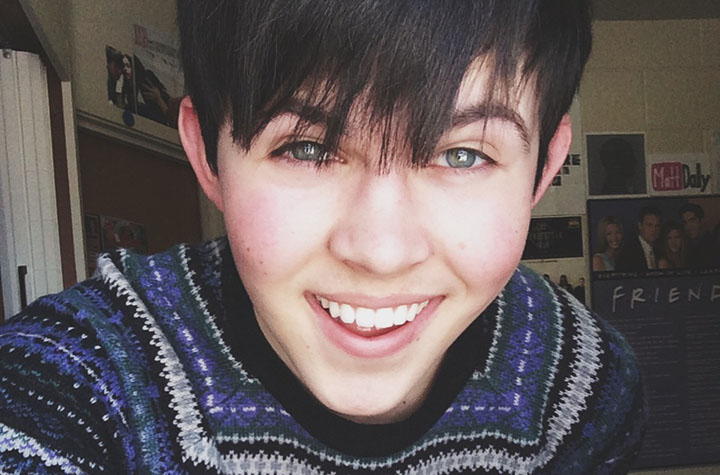 Many people spend their spare time watching YouTube videos, but Matt Daly, a sophomore at Central Michigan University, takes a different approach. He makes them.

Daly made the decision to make a YouTube account and he called it “Bipolarbananas” in June 2007.  Little did he know that it would soon be viewed by more than 7,000 people, some of which would become his biggest fans.

Daly spent time recording videos using the family cassette tape and enjoyed watching YouTube videos, which led him to trying out the new hobby and making an account for himself.

“It was so fun,” Daly said. “I love watching them, so I thought I might as well try to make them.”

His videos are mainly vlogs, which feature him talking about random topics. They vary from music videos, to serious topics, to random quirky yet conversational topics. He said that if he was to compare himself to a YouTube star, it would be Grace Helbig.

“I just talk and it ends up being funny,” Daly said.

Daly has even had guest YouTubers in his videos such as Lauren Sanderson and Matt DeVries. Being in each other’s videos and featured on their channels allow a potential expansion in audience and exposure.

Daly explained that his favorite part of being on YouTube is connecting with people and being able to affect them. He has met and connected with people from all over the county simply by putting a few videos on the Internet.

“You would think that people living across the county would be so different from you, but you can actually relate to them,” Daly said.

Kaitlin Bell, sophomore and friend of Daly, said she thinks his videos are very effective in encouraging people to be their own person.

“He exudes a very unique personality and embraces it in his videos encouraging others to embrace their uniqueness as well,” Bell said.

So how does one gain so many views in just a few short years? Daly explained that he does not really know how it happened, nor was he expecting it.

“If you’re consistent, you can gain some sort of viewership,” he said.

Daly said he tries to make videos as much as he can. At times he would try to post a new video once a week, but sometimes he can only get one posted every month or two. Still, throughout the years, Daly’s subscribers have increased dramatically.

“It was really exciting to see the amount of subscribers grow and meet new people,” Daly said.

Like every rising star, Daly has had to deal with some haters.

“I’ve been called every bad name out there,” Daly said.

While some people do post rude comments, those comments are minuscule compared to the positive feedback.

“At first it would bring me down, but after while you realize they don’t matter,” Daly said.

Regardless of the haters, Daly explained there are some people out there who are really big fans. He has met people from all over the county at concerts and even more at the national YouTube conference called Vidcon.

Freshman Nick Rendon has previously been in Daly’s videos. During their first semester at Central Michigan, Daly’s videos usually featured both of them. Daly would be filming his usual vlog and Rendon would be in the background randomly saying things, adding more humor to the videos.

“[The videos] are definitely entertaining and interesting,” Rendon said. “They cheer you up if you’re having a bad day.”

Daly said the two of them even had fan girls who would add them on Facebook simply because they enjoyed the comical videos. Rendon however, stopped being in Daly’s videos when they started to interfere with his school work. He explained how sometimes they would be up until 4 a.m. making videos which made going to class a struggle.

With his channel becoming more popular, Daly has been exposed to the true dedication of fans. When he was at a concert, a worker sold him lemonade and later tweeted about how excited she was about meeting him. Daly said he never expected for his YouTube channel to reach its current level of exposure and is happy that he has been able to connect with people from all over the country.

Besides meeting fans at concerts and conventions, Daly has also received fan mail. He explained how one fan even sent him a Taco Bell gift card.

“In letters people say how I am inspirational and how they love listening to me talk,” Daly said.

Bell explained that she felt most inspired by a video where Daly tells the story of when he came out to his parents.

“It’s something that may be difficult for many people and posting it online probably gave others the strength to do same thing,” Bell said.

After making videos for years now, Daly has learned that the more time you spend making videos, the better they will become. At first he said they could be awkward and it could be difficult to find a place to record without people in the background. Now Daly is able to make videos with confidence and also influence people from all over.

“The older you get the more experience you get and you realize that the awkwardness is dumb and you just have to roll with it,” Daly said.

Bell said that she believes Daly has the potential to become more famous, but also said that to many people he already is when considering the amount of views and likes he has already obtained.

“He’s a great person, and if you ever get the chance, check him out,” Bell said.

The main goal for Daly is not to become the most famous YouTube star out there, however. He simply wants to impact and inspire people in a positive way. He would like to make videos that people can relate to and make a connection with. His videos can be found on his two YouTube channels, “bipolarbananas and “Mattdalytv”

“I hope people can laugh with them and if I ever make more serious ones they can relate and that it can make them a better person in a way,” Daly said.