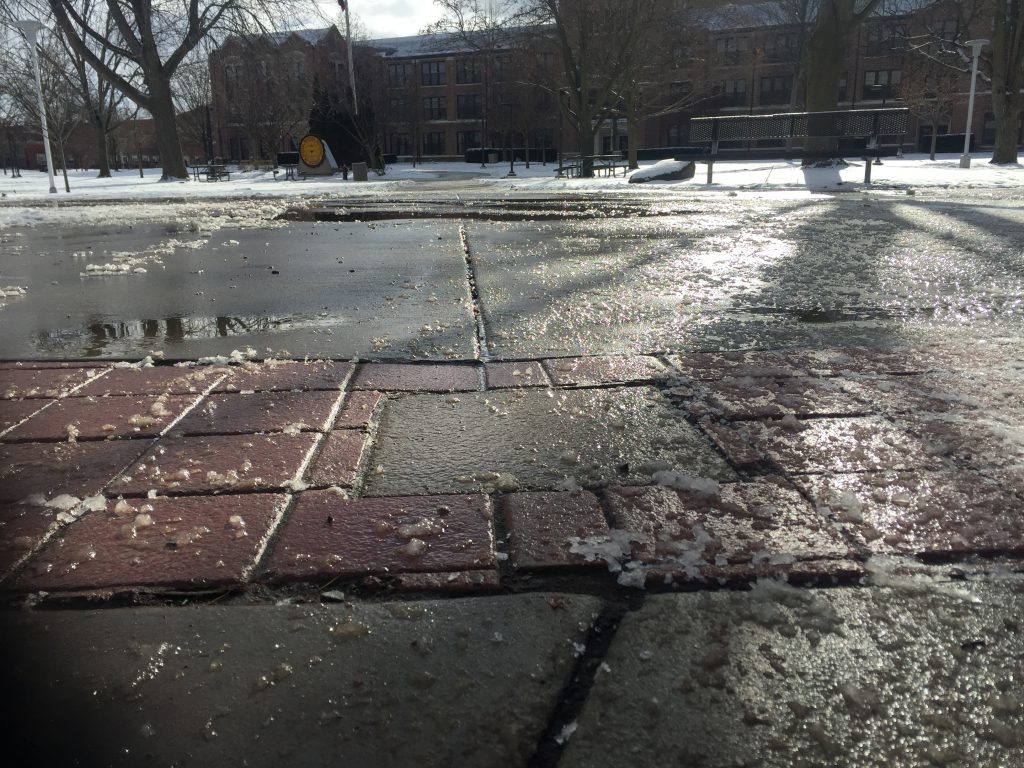 It was just above freezing leaving the snow melting and the sidewalks slushy. Ian Gekeler, a Central Michigan University junior, was exiting McGuirk Arena towards Broomfield Street where the sidewalks incline down the road. Gekeler was on his scooter that he uses to get around campus. Going down the sidewalk, a small part fell off his scooter.

Gekeler stopped his scooter, got off, and picked up the part. The problem is not that the part fell off, but since Gekeler had to stop to get it, his scooter went into power safety mode which is a protection against the battery getting wet in conditions outside. This left Gekeler stranded until the power safety mode would stop.

Gekeler started pushing the scooter back up the incline when finally another student stopped to help him bring the scooter inside, so Gekeler wouldn’t have to wait for his scooter to start back up in the cold.

“I had to wait inside McGuirk Arena for about an hour before my battery turned back on,” Gekeler said. “I then had to go from McGuirk Arena back to my dorm without stopping or my battery would go back into power safety mode.”

The power safety mode on his scooter is not a mode Gekeler can turn off and this situation has happened over 10 times at CMU, because the snow will get on the battery.

Gekeler has Metatropic dysplasia, which is a form of dwarfism. It affects his bone structure where he has bones that are under developed, along with arthritis that affects every joint in his body. This causes constant pain for him. Every time he wakes up the pain is so bad that he has to stand there for a minute until he gets used to it.

Between the two, Gekeler deals with a lot of stress, making day to day things more difficult. He has problems showering depending on how the pain is that day. Gekeler can’t reach certain parts of his body with his dysplasia and it prevents him from doing a lot of activities including walking long distances, because of the pain he deals with every day, which is why he has a scooter.

“I have people tell me all the time that they wish they had a scooter to ride on and get around campus which isn’t a harmful statement because I would be lying if I said it wasn’t fun to drive because it is quite fun,” Gekeler said. “But I would prefer not having to have a scooter in the first place.”

Gekeler struggles on campus with the doors to get into the buildings, because sometimes they don’t work and it takes about half the semester until they are working again. The sidewalks are a problem as well, especially on the street Anspach Hall is on. That sidewalk has giant chunks missing so there are massive bumps that damage Gekeler’s scooter.

The doors at Towers Hall sometimes will have a giant recycling bin in front of the handicapped button to open the door so Gekeler has had to grab a shovel to hit the button on his way out the door.

Gekeler has only gone to Student Disability Services once, but on that one visit he compiled a list in his phone of all the things he needed fixed or looked into so he didn’t have to keep going back multiple times.

“I’ve shied away from their services just because I’m a pretty independent person so if something comes up I try to find my own solution to it rather than going to people and having them fix it for me,” Gekeler said.

Lynne L’Hommedieu, director of Student Disability Services (SDS), explained that for those with similar struggles to Gekeler, SDS offer a couple of different services like registering when it first opens so they can space their schedule out. This way they have time to get to their next class. They also advise students with mobility issues to take some online classes in the winter, so they don’t have to deal with bad weather and risk falling.

L’Hommedieu recommends students with mobility issues to meet with her before classes start so they can talk through what paths they will take going to class. This way they make sure those sidewalks are plowed first. Facilities management contacts L’Hommedieu every fall to find out what paths students with mobility issues will be taking which makes the facility management aware of what buildings to pay more attention to.

Some people who have limited use of their arms struggle to type when others are fine. SDS offers a software that can record the lectures for them so they can hear it again. SDS also has software where they can use it to talk out their papers.

SDS helps about 700 students on campus and globally.

“I really love working with college students and this job is really about the problem solving which I like doing and it makes a huge difference for the students,” L’Hommedieu said. “It helps them get through college which I think college is a formative experience and I think students with disabilities should have that too.”

CMU has help accessible to students at SDS, but according to Mateo Savedra, CMU junior, the university itself needs to take more steps into making their facilities better for people who struggle similar to Gekeler.

“The university really hasn’t taken any steps to improve the accessibility for areas on campus,” Savedra said. “They feel like it affects so few students that it’s not worth the money which I don’t agree with, but I think you should try and do all you can to try and make accommodations for everybody.”

Savedra has known Gekeler since their freshman year living on the same floor. They became best friends and as Savedra began to notice the obstacles Gekeler has had to face, Savedra became more self-aware of issues Savedra has not thought about before.

Savedra never thought of these types of things until Gekeler pointed them out to him, but for some places on campus that are supposed to be more accessible and have inclines, those inclines are too steep which makes it difficult for people to even get up.

Savedra mentioned that the handicap button at the library on campus is in a weird spot right in front of the door, so you have to press the button and back up really fast or else the door might hit you.

Savedra explained that the elevators at the University Center are very small and cramped. They need to be redone, because Gekeler has gotten stuck in the elevator because it broke down.

“I think disabilities are one of the things you tend to see and it usually is thought of as looking at people as being different right away,” Savedra said. “When people look different from everyone else it’s scary, because people are afraid of what is not familiar to them and they shouldn’t do that because if they were familiar with it then they wouldn’t be afraid.”

Gekeler faces several challenges at college, but is still planning to graduate in May of 2019 with a degree in sports management.