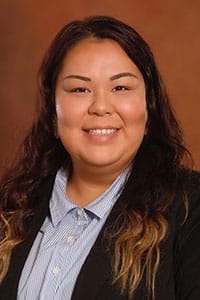 Health care disparities within the Native American community have raised issues in the health care industry.

“My dream after college is to work within the tribal health field bringing health resources to rural communities,” Bartol said.

Bartol grew up within the Hannahville Indian Community, a small reservation in the Upper Peninsula of Michigan, near Escanaba. She attended tribal school her entire life and was very involved within her community growing up.

At CMU, Bartol studies health administration and is a double minor in community health education and substance abuse education: prevention, intervention and treatment.

Bartol came to CMU thinking biology, but “quickly” found out it was not for her. She knew she wanted to be involved with tribal health because she wants to bring awareness to the health disparities that Indigenous people face. Ultimately, she found health administration.

“A goal of mine is to ultimately work for a community as a health administrator and elevate the health status for Indigenous people,” she said.

“I decided to apply very last minute because I didn’t think they would pick me,” Bartol said.

“I almost fell out of my chair because of being in shock. I wanted to jump up and down and tell everyone around me,” she said when chosen.

She said she hopes to learn valuable information that will advance her within her future career. She also hopes to learn the ground work for tribal health and how policies go into effect.

Bartol is passionate about the AIDS and HIV issue within the Native American community.

“I want to bring more awareness to the issue within the tribal health world because it’s a topic not discussed very often,” she said. She added that bringing resources to her community would be beneficial.

“Whether it be mental health, public health or more funding to update aging facilities and equipment, by bringing these to my community I can better serve people on their journey to a healthier lifestyle,” Bartol said.

Bartol wants to be the person to make the change.