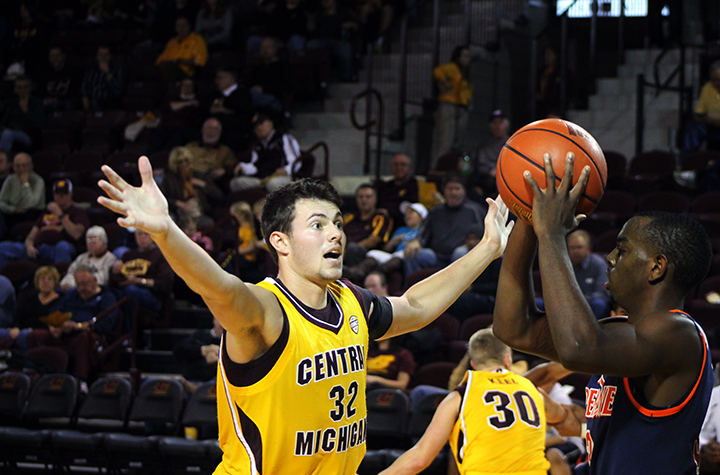 Who doesn’t dream of throwing the game-winning touchdown pass in the Super Bowl and hitting a walk-off home run in the World Series when they’re a kid?

Not just one or the other, but both of them. The whole enchilada of childhood dreams rolled into a cocktail of sports supremacy. Being a two-sport athlete is the dream of all zero and one-sport athletes.

Hibbitts plays both basketball as a forward and baseball as a pitcher during the academic year. The two sports fall back to back leaving Hibbitts little free time. It’s the lack of time that is a key factor into the lack of multi-sport athletes.

After high school, it becomes increasingly rare to see an athlete in multiple team sports at a competitive level. In college, the academic schedule and near overlapping seasons makes it hard for a student-athlete to balance the time needed for two sports. Only the most elite athletes can pull off double duty.

Professionally there was no greater two-sport athlete than Bo Jackson. Not only was Jackson one of the most powerful video game characters of all-time in Tecmo Bowl, but he wasn’t too shabby playing football and baseball either, being the only athlete ever named to all-star games in two major American sports.

After leaving Auburn with a Heisman Trophy, Jackson went on to star for the Los Angles Raiders and the Kansas City Royals simultaneously. If not for a hip injury suffered in a football game against the Cincinnati Bengals in the 1991 playoffs, he could have gone on to have multiple all-star seasons in the MLB and NFL. Jackson had the skill set to lead both leagues in multiple statistical categories.

Since Jackson, Deion Sanders, Michael Jordan, and others have dabbled in two professional sports. Prime Time wasn’t exactly an all-star at the MLB level despite being arguably the best cornerback in NFL history.

M.J. never quite made it to the Major Leagues playing baseball despite taking a break from his basketball career. Luckily for everyone, he thought saving the world from the Monstars and returning to the NBA was for the best.

Recently, Seattle Seahawks’ quarterback Russell Wilson flirted with the idea of returning to the baseball diamond. The Texas Rangers drafted Wilson into the MLB for the third time in December. The Super Bowl-winning gunslinger has even participated in spring training drills with the Rangers.

Jackson though was quick to suggest to Wilson that he should focus solely on football. The sacrifice to the body is too great of a threat to do well at either sport says Jackson. After all, Bo Knows.

So even if professionally the idea of a two-sport athlete is becoming more of a memory than a reality, it still happens at the college level despite similar rigorous training regimes and academic obligations.

Other than Central’s own Hibbitts, there is Jameis Winston, who gained notoriety by being a freshman quarterback for the national championship Florida State football team. Winston followed up his football season by reporting to spring training for FSU’s baseball team.

The idea of a two-sport athlete at such a high level of competition is still something kids dream about. To be playing in multiple sports is a true accomplishment to one’s athleticism and versatility.

The time dedicated to perfecting two different crafts is something that shouldn’t be taken for granted.