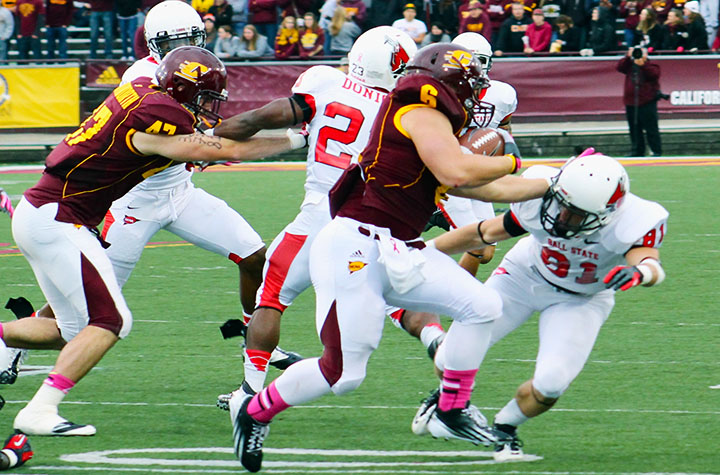 Saylor Lavallii seems to have found his groove in Central Michigan’s offense, and it couldn’t have come at a better time.

Lavallii led Central Michigan (3-4, 2-1) with a career high 184 yards on 26 carries, in the Chippewas’ upset victory over Ohio University on Oct. 12. Central Michigan came into Athens, Ohio a 17.5 underdog but came out with a momentous 26-23 victory, effectively snapping Ohio’s four-game winning streak.

After weeks of regression, Cooper Rush turned in the best performance of his tenure as the Chippewas’ starting quarterback. Rush threw for three touchdowns with 224 yards on 20 of 28 passing.

The biggest takeaway was the poise and leadership that the young quarterback showed throughout the fourth quarter. His 5-yard game winning-touchdown pass on third and goal to Courtney Williams with under a minute to play, being chief among them.

With that said, Dan Enos realizes that there is once again no time to sit back and enjoy this big win.

The No. 23 ranked team in the nation and reigning Mid-American Conference champions, the Northern Illinois Huskies (6-0, 2-0), come to Mount Pleasant on Saturday for Central Michigan’s homecoming game.

Northern Illinois features one of the more dynamic quarterbacks in the nation in Jordan Lynch. With 17 total touchdowns—13 passing and four rushing—Lynch creates a number of problems for Central’s defense.

For the Chippewas to pull off another in-conference upset and its third consecutive victory, the defense will have to force Lynch to do something he typically doesn’t do; turn the ball over.

Lynch has only thrown four interceptions through six games, two against Eastern Illinois and two against Kent State. That makes four games without turning the ball over through the air.

Frazier and his cohort will need to do more of the same to slow down the Huskies’ explosive attack. Lynch and his teammates have big-game experience from playing in the Orange Bowl last season and have not lost a MAC game since 2011.

The last team to defeat Northern Illinois in conference play was in fact Central Michigan, 48-41 on Oct. 1, 2011.

Northern Illinois enters the game as a 17-point favorite. Central needs to execute the same way they did against Ohio to a T, to come away with a victory.

Forcing four turnovers and possessing the ball for 11 more minutes than Ohio, kept the Bobcats’ offense from ever getting into a rhythm. Ohio quarterback Tyler Tettleton had a great game on paper, but killed the flow of his offense with some crucial mistakes.

Tettleton finished with two touchdowns and two interceptions on 24 of 33 with 319 yards. Ohio turned the ball over on three straight drives in the second quarter, including an interception by Brandon Greer in the end zone.

Frazier needs to keep exhibiting his skills as a ballhawk on the defense for Central to extend its winning streak on Saturday. Frazier has three interceptions, 47 tackles, as well as a forced and recovered fumble. Nothing makes a young quarterback’s life easier than a defense that gets him the ball back.

Here are three things that Central Michigan has to do to beat Northern Illinois on Saturday.

1.) Run Saylor Lavallii and then run him some more.

Lavallii is playing the best football of his collegiate career and is on a roll. In three conference games he has carried the ball 75 times for 479 yards, which is good for 68 percent of his total rushing yards on the season, and three touchdowns.

His numbers are off the charts when compared to non-conference games. Lavallii is running the ball hard and is protecting the football, and has proven that he can be the workhorse that this team has desperately needed since losing Zurlon Tipton in the season opener.

Yes, Lynch is a very special football player and the headline grabber, but Stingily can make you pay if you don’t focus your defensive game plan on him.

On Oct. 5 against Kent State, Stingily ran for two touchdowns and 266 yards on 37 carries. Central Michigan has to stop the run and keep Northern Illinois off the field as much as possible.

3.) Ron Coluzzi has got to capitalize.

Whether you’re playing the No. 23 ranked team in the country or an FCS school, you must capitalize when you have a chance to put points on the board.

Coluzzi missed two field goal attempts (36 and 23-yard attempts) and an extra point against Ohio. He needs to make sure to not make outings like this a consistent thing.

Points will be at a premium against Northern Illinois.