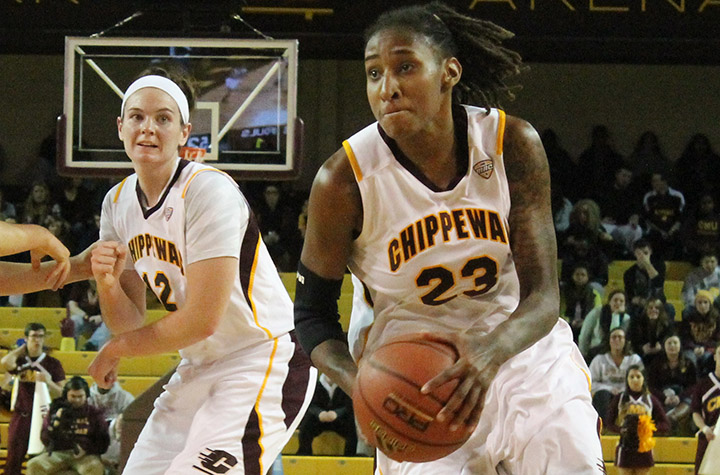 Junior guard Crystal Bradford led the team with 27 points and 15 rebounds on 10 of 23 shooting from the field, including six of 10 from the free throw line.

“They came and gave us a good run for our money,” Bradford said. “I would say we definitely underestimated them. I knew they were better than what they’ve been. However, I don’t think we gave them our best shot the first half. The second half we came out better.”

The Chippewas were off to a slow start trailing the Huskies with a score of 11-2 in the first six minutes. Coach Sue Guevara said Central had to grind it out because of the way Northern Illinois controlled the beginning of the game.

“They came in and that first couple of minutes just shot the lights out on us and I thought we got frustrated early missing easy puppies, wide open threes, but I give our team a lot of credit in the second half,” Guevara said.

Central only shot 34.3 percent in the first half compared to Northern Illinois’ 40 percent, which gave the Huskies a 32-29 lead at the half.

Bradford said when the second half started the team grew hungrier and began to play more aggressively. Central changed the tone of the game with the help of Jas’Mine Bracey and Jessica Green. Bracey contributed 10 points and 14 rebounds while Green delivered 12 points and three rebounds resulting in a Chippewa victory.

“It’s just something about our team that we just come out in the second half rolling,” Bradford said. “I think we should come out and start like that but we don’t.”

Central struggled a bit offensively converting only four of 21 attempts (19 percent) from the three-point line.  Bradford said the team often tends to live and die by the big shot, but she felt the team’s penetration was working well on Wednesday night and it helped led the Chippewas to their fourth straight victory.

“We’re more penetraters so I think (with) our penetration we can go either or,” Bradford said. “We noticed that our threes are not falling (but) we’re not going to tell our shooters to stop shooting. If anything, we’ll tell them to forget the last shot and keep shooting.”

Guevara said the three-point shots didn’t go in, but they should fall in Saturday’s game against Bowling Green.  Guevara said she isn’t worried about struggling with her team making threes because of the confidence she has in her players.

Guevara said Bradford is a really good rebounder and can be hard to box out, especially when she goes to the glass. Guevara said she has noticed improvement when it comes to her shot selection as well.

“I think CB (Bradford) is doing a better job letting the game come to her,” Guevara said. “Her being able to finish has really gotten better. Her ability to get in and attack and then give the ball up to other people.”

Bradford said a change she’s noticed in her performance compared to earlier this season, is some of the usual shots she takes aren’t falling for some reason but that will change with practice.

“I feel like I have to practice a little more,” Bradford said. “I would say that’s the only thing that’s changed. I’m still working hard.”

Central hasn’t lost a single home game this season and Bradford is working hard alongside her teammates to keep it that way.