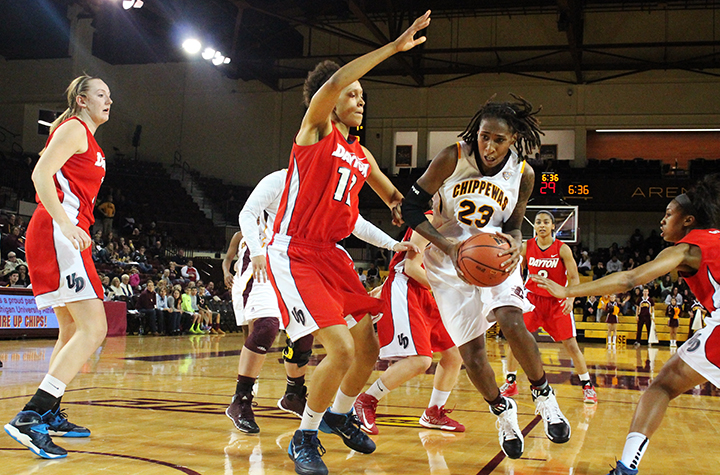 With two seconds left on the clock and the game tied 91-91, all eyes were on junior guard Crystal Bradford.

Three…two…one… and the fans inside McGurik arena went wild, as Bradford’s shot went in with 0.2 seconds remaining.

“When I threw it up, I didn’t look again because I thought to myself ‘(It’s) got a chance to go in,’” Bradford said. “I just waited and listened to the crowd and then they went crazy.”

Central Michigan (3-4) kicked off its first home game of the season with a bang, by getting the win against Dayton (2-4) on Thursday night with a final score of 94-91.

Actually, make that two bangs, due to the game tying shot by senior forward Taylor Johnson.

“You saw Crystal (Bradford) make a big fat shot and you saw Taylor Johnson make another big fat shot,” Coach Sue Guevara said. “Taylor (Johnson) only goes 1-from-3 from the three, but it was a big three.”

“I think defensively we did what we had to do down the stretch, and we played a lot of 2-3 zone simply because they were taking it at us,” Guevara said. “Earlier on in our man-to-man they were good at attacking the basket and getting us  into foul trouble.

“So it’s like ‘OK let’s go with the zone defense, we have to know where their shooters are and it worked out.”

Although Central Michigan was down by nine points a couple of times throughout the game, the team fought back and big players made big plays.

The 3-pointer is what Guevara calls the “trademark play” of her team, as Johnson tied the game with a three and Bradford clinched the victory with a three. Guevara said you could live or die by the shot.

“Crystal had a shot at the end of the game and as soon as she let it go, I was ‘like it’s going in,’” Johnson said. “I couldn’t believe it.”

Right before Bradford’s shot, Johnson had possession of the ball and it flew into Bradford’s hands when Johnson stumbled and fell.

Bradford called the shot a relief and said the team didn’t think they would get another shot, because there was only five seconds left. But Dayton turned the ball over and gave the Chippewas another chance to win in regulation.

“It’s a big moment for me,” Bradford said. “I thank our fans that support us, everybody that came out because we fed off their energy tonight.”

Bradford’s play made national airwaves, as it was No. 2 on ESPN’s SportsCenter top 10 plays of the day.

Guevara hopes this game entices more people to come back and watch the girls play, starting when they return to McGuirk to face Prairie View A&M at noon on Wednesday, Dec. 18.