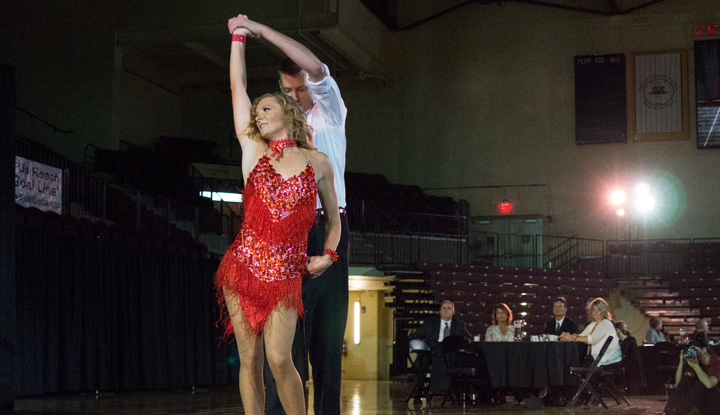 A cross of “Dancing with the Stars” and “So You Think You Can Dance” made its way to Mount Pleasant for a second year. Last Thursday, Central Michigan University and the United Way hosted the fundraiser Dance United.

Ten couples from the student body, faculty and even the Mount Pleasant community laced up their dancing shoes for a good cause. One-hundred percent of the proceeds went to United Way because the set-up costs had been taken care of by sponsors.

At 7 p.m. the CMU Events Center started to flood with people. Individuals from all over campus and the community came to support their favorite couple.

On the floor there was a stage accompanied by numerous VIP tables that could be purchased for $300.

Despite resembling shows like “So You Think You Can Dance,” the night was not a dance competition at all. The idea was for people to donate to support their favorite couple before, after and during the event.

The fundraising goal was $10,000 and Dance United delivered.

“We love that it’s not just a student or just a faculty event,” Drum said.

Every couple took turns, taking the stage each with a unique style of dance. These dances were choreographed by dance students or teachers. Almost all of the dancers started out as amateurs, but each couple participated in dance training prior to the big event.

There were many special guests that helped make the night a night to remember as well.

Club Hip Hop, DuHadway, On the Rox, and the Central Dance Team performed for the audience between Dance United couples. DuHadway did a contemporary and hip-hop routine with dancers ranging in age from 7 years old to 30 years old.

Sophomore Travis White joked around with the president and CEO of United Way, saying if they needed dancers for next year he would gladly make the sacrifice. Many others agreed including the marketing director of Special Olympics Michigan.

With the continued support of students and community members, this creative fundraiser will be back for the third time next year.