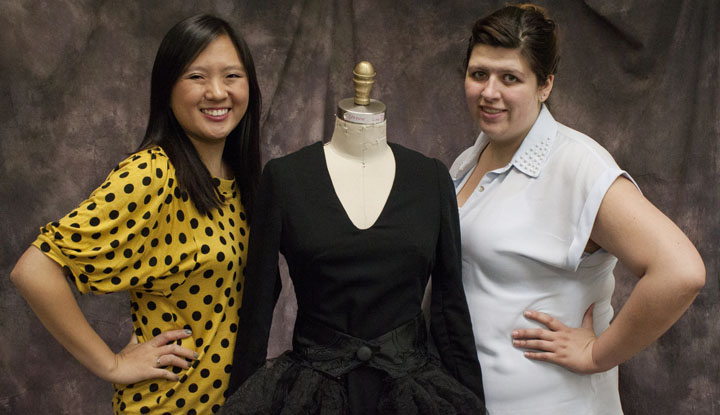 The two seniors have been designing for the annual Threads fashion show for the past two years. Wooden said she has been in love with fashion and design ever since she can remember. When it comes to deciding on a career, fashion is the only option.

“I couldn’t imagine myself not being in the industry or a person that has a career and going to school for it,” Wooden said. “I think it’s like a huge passion.”

Wooden came to Central due to the talented Apparel Merchandising and Design program offered to students. Here, she met senior Brenna Maday, who came to Central after attending the university’s fashion camp.

Maday knew she wanted to work in the fashion industry ever since she was a little girl. Maday remembers going over her family friend’s house and she could be found playing in the closet with scarves and high heels.

Maday and Wooden will be two of the 15 designers having their designs showcased at the Threads Best of the Best fashion show at 7 p.m. on Saturday in the Education and Human Services building.

This progam is a new Threads event unlike any shows in the past. It is an intimate fashion show, and will feature current and alumni Thread designers. Afterwards is a meet-and-greet with the show’s designers and models.

Maday and Wooden decided to work together as a designer duo and design a collection inspired from the film “The Boondock Saints.” The ladies worked on the design last winter and it was displayed in Threads spring show last year.

“It’s definitely cool to be part of a program that’s growing and spreading through campus,” Wooden said. “And this show is obviously creating wonderful opportunities for the majors to be part of that and to be part of the first show, that is kind of powerful, too.”

Maday and Wooden’s collection incorporated different elements from the film. Wooden said the main colors used in their clothing were black and red. The ladies added a lot of texture to add depth to their designs because the color black can seem dull and boring at times.

“We played around with textures, different types of fabrics, play on the little black dress,” Maday said. “We did a little twist on that and tuxedo pants.”

One of the pieces attendees can look forward to is a black long sleeve dress with a detachable, flowy skirt. Maday and Wooden calls it their “wild piece.”

Designing the whole collection took roughly four or five months. Maday and Wooden said working on garment pieces, such as the pants, took a long time as well as draping and pinning their poofy skirt.

Maday said it’s a challenge to balance class and designing clothes. However, the hard work put in is worth it.

“It’s rewarding to see everything come together eventually even though it’s a hot mess minutes before,” Maday said. “Seeing it come together is really rewarding and seeing people be amazed, that’s kind of rewarding as well because they appreciate the things you do even though they don’t know how the heck you did it.”

Creating the collection not only took hard work, but compromises. Wooden said she and Maday may have been working on the same collection but they came across times where they had two totally different ideas.

“She’s very precise in her design style where I’m very relaxed and I’m very go with the flow, take it as it come,” Wooden said. “There were situations where I’m like ‘Stop redoing it because you’re an eighth of an inch off. You’re not even during the sixteenth and an eighth. As a design duo, we definitely had a good balance.”

Maday and Wooden are excited to be supporting Threads again and boosting the program. They’re looking forward to showing their designs to a different audience and teaching others what the Apparel and Merchandising and Design program is all about.

“I just really want people to appreciate what we do because I feel like sometimes, I don’t hear a lot of people bash our major but a lot of people don’t really understand how much stress and time consuming it is,” Maday said. “It’s a very time-consuming major and very expensive.”

The best advice Maday and Wooden would give to aspiring fashion designers who are freshmen would be to not give up and to not lose sight of who you are.

“Don’t just make something because you saw it in a magazine or something,” Maday said. “Really take each garment you make, whether it’s for a class or not a class, take it to heart, make it your own and don’t be too hard on yourself, too, because you’re still learning and there’s tons of other people around you that are in the same boat as you.”