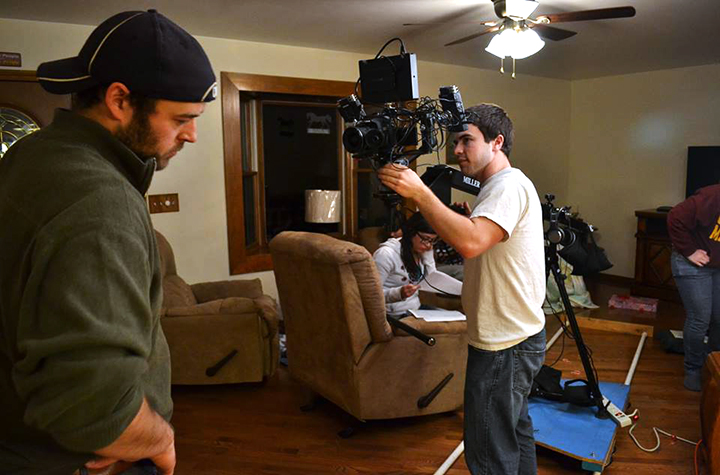 Grant Pichla, a local director from Mount Pleasant, has had quite a year.

“Niner,” Pichla’s debut film and MA thesis project, is set to have its premiere at Celebration Cinema on April 1, with two showtimes at 6 p.m. and 9 p.m, with proceeds going toward The Cystic Fibrosis Foundation. It’s been a two-year venture and the biggest project the young and prolific filmmaker has accomplished since he started making short films in high school.

“This year was my big year,” Pichla said. “When I started in Fall 2012, I had to two years to get a movie, a wedding, and a master’s degree. I’m going for the triple play here.”

Pichla’s film was funded through a Kickstarter page, where he exceeded his pledged goal of $5,000 and raised $6,930 with the help of 80 backers. Several rewards were offered to the people that donated money, including DVDs and — for the contributors who put forth over $300 — a chance to appear in the film.

“The nice thing about Kickstarter is that it already creates an audience. Knowing that 50 people donated enough to earn themselves a DVD, that tells right away that we need 50 DVDs pressed. They start telling their friends and say ‘OK, can I get five more DVDs.’ You start to build an audience before the picture is even done,” Pichla said.

“Niner” started as a screenplay written by an IMDB-credited writer named Eric C. Dickson. Pichla found the script while searching through Amazon Studios, which is a site for screenwriters to upload scripts for the general public, to alter in the hopes that they will be developed into a “test film” by directors.

The plot on the film’s Kickstarter page reads: “The Samms are just finishing dinner and starting dessert. Without warning, three criminals enter their home and murder them, one at a time. But what the killers don’t know is that they’ve left a survivor. Seventeen-year old Abby Samms (Lindsay Chestnut) escapes and is picked up on the side of the road by nurse Carly Dennis (Kate Sullivan) and Carly’s self-confident boyfriend: homicide detective Rawley Niner (Dave Giles). Abby sits in shock, until releasing tears and claiming her family has been murdered. Rawley decides to take action.”

“There were over 2,000 scripts that I, at least, skimmed the log-line for,” said Pichla. “I got it down to 100 scripts that I thought could potentially be made. I read them all, ranked them, took my top four and e-mailed all the writers and luckily, my number one was ‘Niner.'”

Dickson’s script had already gone through 13 different re-writes on the site when Pichla contacted him about developing it into a school film.

“He said ‘No one’s interested in it at this time, so go ahead. Let’s do it,'” Pichla said. “I have never spoken to him on the phone or face-to-face, and I won’t until the premiere. He’s flying in from Florida.”

Despite the long hours of labor put forth in developing his film, Pichla isn’t interested in any kind of profit. His film — and especially, the premiere at Celebration Cinema — is his way of giving back and showing appreciation for those who helped along the way.

“We’ve had so many thing given to us by people and the community. Even though, theoretically, profits could be made…Kevin (Grant’s producer) and I just thought ‘You know, we can’t even afford to pay our composer who has spent over a year on the score. What’s the point of us keeping a couple hundred dollars?'” said Pichla. “Kevin has a family friend with Cystic Fibrosis, and he thought it would be an easy to help them out. I said absolutely.”

Moving from a slew of short films — including a web series titled “60” — into a debut feature-film presented new challenges for the director. The scale was much larger than anything Pichla had worked on in the past, going from a crew of four or five people and a laid back production schedule, to nearly 100 crew members, 40 speaking roles, and scrupulous story-boarding.

“It goes from a short film with a couple locations to needing 25 different locations. Everything has to be on the books, so you have to deadline,” Pichla said. “Luckily, I had Kevin A. Smith, my producer, and Lauren Culver, my production manager, who both really helped with scheduling.”

As far as influences for Pichla’s film, he cites Martin Scorsese and the Coen Brothers, as well as gritty films such as David Fincher’s “Seven” and Curtis Hanson’s “L.A. Confidential.”

“I’m very much attracted to directors presenting an idea to an audience and then saying ‘What do you think?’ That doesn’t mean it has to be open-ended — you can have a conclusive ending, or even a Hollywood ending. But creating the emotional response from the audience and having them talk about what they just saw afterwards — that is, what I think, makes those guys really great,” Pichla said.