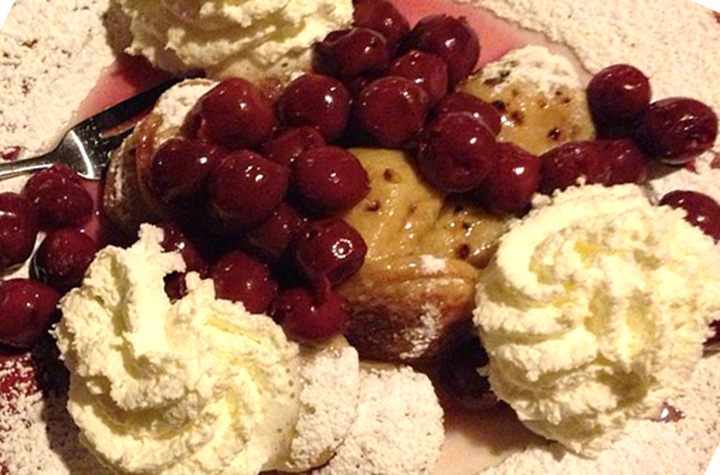 Amsterdam is a mysterious and intriguing place. I did not know what to expect out of the city. I could count the things I knew about Amsterdam on one hand: Red Light District, legalized weed, Anne Frank and bicycles. What I came to realize was that Amsterdam is a city full of different cultures, laid-back and friendly people, beautiful sights and delicious food.

As we walked through the streets, my eyes traveled around the city in awe of the architecture and network of canals that seemed never ending. Scattered between international fast-food chains were small traditional Dutch cafés and restaurants offering everything from full breakfasts to extravagant seafood plates.

Having arrived early in the morning, a stop for breakfast was in need. This restaurant my three fiends and I picked turned out to be more than just a restaurant. It was also a coffee shop but not the kind I was accustomed to.

A couple of British tourists sat at the table next to us and proceeded to enjoy their full breakfast plates with a side of hash — marijuana. Although we thoroughly appreciated the meal, we were shocked to see such a sight so early in the morning.

Later in the evening, after a long day of shopping for souvenirs and touring the famous Anne Frank House, our legs were weak and our stomachs were rumbling. Thankfully, I was able to locate a rather famous restaurant just about five minutes away from the museum.

The Pancake Bakery was established in 1973 as a small restaurant “with a basic menu.” Now, it is a world-renowned pancake eatery that offers various dishes inspired by international locations.

There was a certain ambiance to the place. The lights were set to low and the original brick walls and friendly staff made for a cozy atmosphere. We were handed menus in English and immediately became overwhelmed by the variety of dishes and options available to us. The decision would not come easy.

Omelets were available as were salads and soups, but the real delights were the pancakes and poffertjes. Choices ranged from traditional pancakes with syrup or apples, to specialty international pancakes filled and baked with unusual ingredients.

Ever heard of pancakes stuffed with broccoli, zucchini, paprika, carrots, onions, mushrooms, leeks and cheese? These are the ingredients in their Masai Pancake. I wasn’t adventurous enough to try something so different, so I stuck with the poffertjes.

My dinner consisted of a hot chocolate with Bailey’s and Dutch poffertjes with cherries, whipped cream, and Kirsch or cherry liqueur. The amount of sugar I was consuming should have been a concern but it was the least of my worries.

The plates arrived and our wide-eyed faces stared at the unbelievable size of the dishes we had just received. My red plate was disguised under a thick layer of powdered sugar. Almost a dozen small fluffy pancakes were buried under mounds of whipped cream and multitude of deliciously sweet cherries.

We didn’t know where to start but within an hour or two all of our plates were completely empty. Although it was difficult to move and I was feeling a little unstable after consuming too much hot chocolate with Bailey’s, our night wasn’t over. We ventured out into the city for more adventures.

Savory or sweet, the perfect meal can be found at The Pancake Bakery. After exploring some interesting tourists sights and consuming some unusual delicacies, I can say confidently that my time in Amsterdam will never be forgotten and my plate of Dutch poffertjes was by far the best thing I ate in Amsterdam.