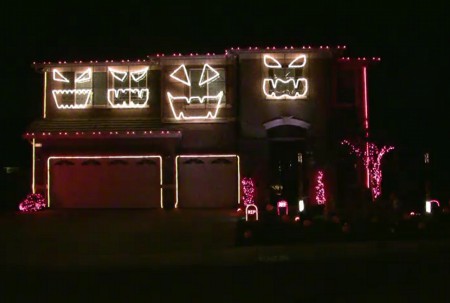 This video has been dominating the Internet now that Halloween has returned, but it was filmed in 2010. The Riverside, California family responsible for the light show apparently didn’t mind fronting the sinfully expensive electric bill two years in a row—it was worth the 1.8 million views on YouTube perhaps.

The debate over the wastefulness of this family, and other similar displays, continues on Facebook, YouTube and the Internet in general. I really don’t do a lot of opinion pieces (nor do I ever use the word “I”), but this is crazy. Someone has to speak up.

This video is undoubtedly a symbol of celebration for this unique season—wasteful as it may be. Surely, a less fortunate family’s home could be powered for weeks with the energy it takes to run the Godzilla of all decorations, but most viewers still can’t deny how awesome it is.

What is it that makes young people in the United States love these displays? Is it an irreversible addiction to consumerism and excess? Is it the need to squash one’s neighbor in the ongoing battle of over-pageantry? Is it our need to over-compensate for what we can’t afford?

No it’s not. That’s ridiculous. If everyone wanted to rig one of these up on Halloween it would just become the norm—like lighting your house up for Christmas, or filling a 12-gallon tank once a week with gasoline, or bathing in countless gallons of fresh drinking water everyday—catch my drift? Why should we shake our heads at this family that has simply bossed-up for the holidays?

Until we stop using gasoline, creating landfills, engaging in war and all other exponentially greater threats to man-kind, why is this even a debate? These people put far more time into this than they did money. That glowing jack-o-lantern’s mouth was spot on.

The truth is, young Americans are sick of hearing about the failing job market, the debt most of us will owe six months after graduation and dwindling Social Security funding. We’ve heard it—and we’re going to deal with that problem when we’re done dealing with current ones, such as, how can I study and sleep at the same time, and how many parking tickets am I going to get this semester?

Dealing with the pressure of being released into an unstable world—most young Americans just want to have something to laugh about.

When the bright lights kick on at the beginning, it’s hard not to laugh out loud due to the sheer brightness of the show. I can’t imagine driving by this as it’s playing.

Enjoy this Halloween season by sharing the spirit, whether it’s carving a pumpkin, passing out candy or something slightly more sophisticated.