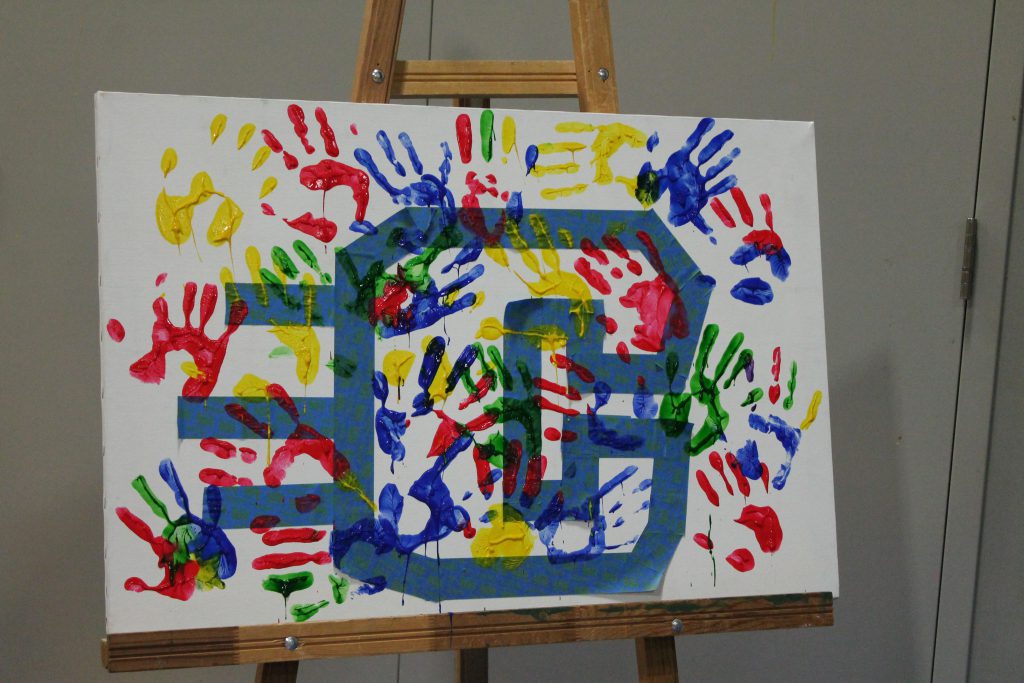 Story and Photos by Quentin Rodriguez

Dozens of students gathered to have fun and relieve stress through messy themed activities at the Mess ‘N De-Stress event in support of mental health awareness  on campus.

Thursday evening in Room 113 of the Finch Fieldhouse featured a variety of stations and activities for students to engage in and help relieve stress while fitting the messy theme of the night. Students from the planning group as well as counselors from the Counseling Center helped facilitate the different stations for the event.

Mess ‘N De Stress was organized by a planning committee of students for their RPL 430 class project and was a fundraiser for the CMU Counseling Center. Evan Rinaldi, a junior and recreation and event management major and one of the students who organized the event, said they wanted to do this event to increase awareness about mental health on campus.

“I know a lot of people are stressed right now with finals and other things coming up, so we wanted to give people the opportunity to have fun and let go of some of their stresses while here,” Rinaldi said.

The event began at 6 PM and its activities included:

Freshman Macey Smalley was one of the numerous students who took part in the Slip N Slide activity. With paint caked to his clothes, Smalley said he knew immediately that he was going to take part in messy exercise once he arrived.

“I guess why not right?” Smalley said. “I came here to get messy, so I might as well go all out.”

There was also a game called “Going Fishing”, which was a take on bobbing for apples, where students would instead dig their faces in bowls of whipped cream to find pieces of Swedish Fish candy to win the prize. Prizes included either a $15 gift card to the CMU Bookstore or a $15 voucher for Cops & Donuts. The games were held and announced throughout the event.

Rachel Border, a junior and Recreation and event management major, as well as a member of the events planning group, said the variety of activities for the event showcase the variety of stress relievers people can have.

“I think a lot of people are stressed and don’t always know how to handle that successfully,” Border says. “It’s important because it brings awareness to different ways to de-stress.”

Victoria Spencer, junior took part in the slip n slide on a whim. Spencer said she had “no intentions” on going down the slippery canvas, but that after doing the Messy Twister activity, she thought “Well, I came this far”.

As someone who goes to the counseling center and its different events as soon as she can, Spencer said the department provides a service and support when she needs it the most.The confidence she gets from the sessions and activities is what led her to try new things, including the Slip n’ Slide, something she wouldn’t normally attempt to do, and she is glad that events like Mess ‘N De-Stress are there to provide that.

“That outlet and that reason for talking, gives me freedom, confidence, and it’s starting to build more confidence,” Spencer says. “It encourages me to try something I haven’t tried or go to things no one has asked me to go for.”

Another activity that took place was a sign with the Central Michigan University Flying C on it that students were encouraged to decorate with their finger and hand print through paint.

This activity was inspired by the #WEARECMU that began to trend during the shooting that took place this past spring at Campbell Hall Rinaldi said. The board and hand prints were made to be a communal artistic effort. The board will be on display at the Counseling Center in Foust Hall.

“We wanted to bring that back because we felt we had lost sight of that,” Rinaldi says. “We wanted that to have that be something that everyone can take part in, so they all have a piece of that in the Counseling Center.”

Mess ‘N De-Stress was sponsored by several different brands and companies in the Mount Pleasant and Isabella County area. These companies were showcased on a banner near the entrance to the room as well as in several announcements by Rinaldi throughout the evening. They included the Isabella County Bank, Big Boy, Art Reach who provided the canvases for the Slip N Slide, Walmart, and more.

Food and drinks, which included pizza provided by Domino’s, were distributed in an adjacent room along with chips and soda. The room also included a Silent Auction, with there being different themed bundles that were given away near the end of the event to winners of the auction.

Mess ‘N De-Stress was organized by a group of students currently in the RPLSLWI 430: Planning Recreation Programs and Events class taught by Professor Tim Ottemon. The group was tasked this semester with choosing a charity or cause and creating an event to benefit that organization.

Rinaldi said the idea for the event came to her during the summer and was inspired by the Recreation, Parks, and Leisure department’s Play in the Way program, a mobile recreation site that had a mess themed event with kids.

Once the group got together and began brainstorming, they decided on doing a similar event for college students with paint. They eventually chose a name for the event, decided on the different activities for it, and chose to support the Counseling Center for their project because of their decided focus on mental health.

Border said that their professor had warned them that there was “good and bad” charities they could choose to work with, with varying levels of involvement for their project. However, she says the group is glad they found ready and willing collaborators in the Counseling Center faculty and that working with them as been the most rewarding them about the project thus far.

“We were really fortunate to be able to meet with the director of the counseling center, and a couple of the counselors to really figure out what we wanted to do and how we wanted them to be involved,” Rachel says.

The director of the counseling center, Melissa Hutchinson, said when the students approached her and other counselors about the idea, she was excited about working with them for the event. Hutchinson has worked at the Counseling Center for 14 years and interim director for a year and a half.

Hutchinson said the event is ultimately important for the CMU community because it showcases the need for students to have “balance” between their schoolwork and their personal lives.

“You have to work hard but you have to play hard to,” Hutchinson says.

Rinaldi hopes that the event can showcase expression and student’s interpretations about how they relieve their own stresses by their choice of activity.

“This is just a way to be creative in a way that’s so careless you can just have fun,” Rinaldi said. “It all up to your interpretation and how your going to vent some stress.”