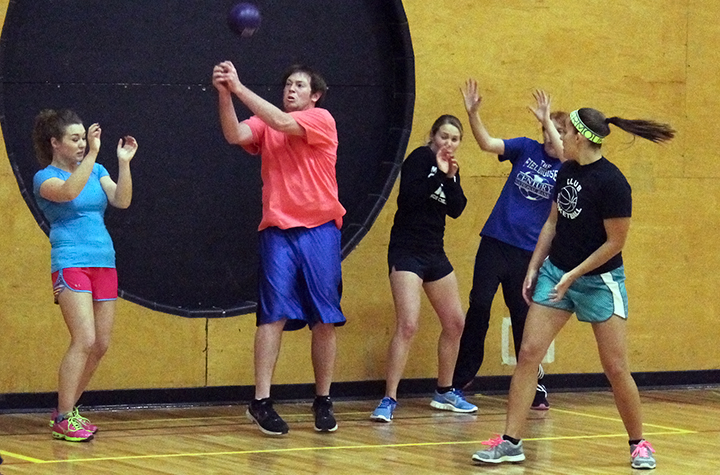 What are the five D’s of dodgeball you may ask? According to the late Patches O’Houlihan, they’re simply duck, dip, dive and dodge!

Those five D’s are being practiced regularly on the campus of Central Michigan University, with the intramural dodgeball season in full swing this semester at the Student Activity Center.

Students from all over  campus come together every Monday night to whip soft-plastic balls at each other, while getting a good cardio workout in at the same time.

Dodgeball at Central Michigan is played in the multi-activity centers that are located on the lower level of the SAC. Each game has a 15-minute time limit, and adheres to the basic rules of dodgeball that we all remember as kids from gym class. The centerline serves as the boundary that separates the two opposing teams. While the blue lines — placed about half way between the centerline and the base line — serve as “attack lines,” which a player has to cross before he or she throws the ball.

One student, 22-year-old senior Megan Rowe, has played over five different intramural sports at Central, and will miss the experience of being able to partake in sports such as dodgeball.

“Dodgeball is just great,” Rowe said. “This is my last semester at Central, so this is my last chance to play intramural sports. I’m really going to miss it.”

Some students like Megan are seasoned, intramural veterans, but it doesn‘t take a pro to start playing and having fun. Junior Cody Kline, 20, has just recently discovered the excitement that dodgeball can offer.

“This is only my second time playing intramural sports, I played basketball last semester and that was a lot of fun,” Kline said. “I like dodgeball because it’s a really good workout, but fun at the same time. You don’t really even think of it as a workout until the 15-minutes is up.”

Kline signed up for dodgeball with a large group (at least 15 people when Kline signed up originally) of students from Pre-PA club, a group for students studying to be Physicians Assistants.

Freshman Dylan Connelly, 18, got involved with dodgeball in a similar fashion.

Connelly signed up for this season with a large group of students from Carey Hall, and says he is making new friends through the experience of playing with his dodgeball team.

“I joined with friends and people from my hall, but I’ve had a good time meeting new people from the other teams, and just having fun,” Connelly said. “For me, it’s more about having fun, but of course it’s always more fun when you win.”

It seems like there are all different types of students, from seniors to freshman, males and females, Average Joes‘ and Purple Cobras‘, that are enthusiastic about playing dodgeball this season.

It’s not too late to join a team and get in on the action. So to those students out there looking to have some fun and get a little competitive, just ask about dodgeball at the SAC service desk and they will point you in the right direction.