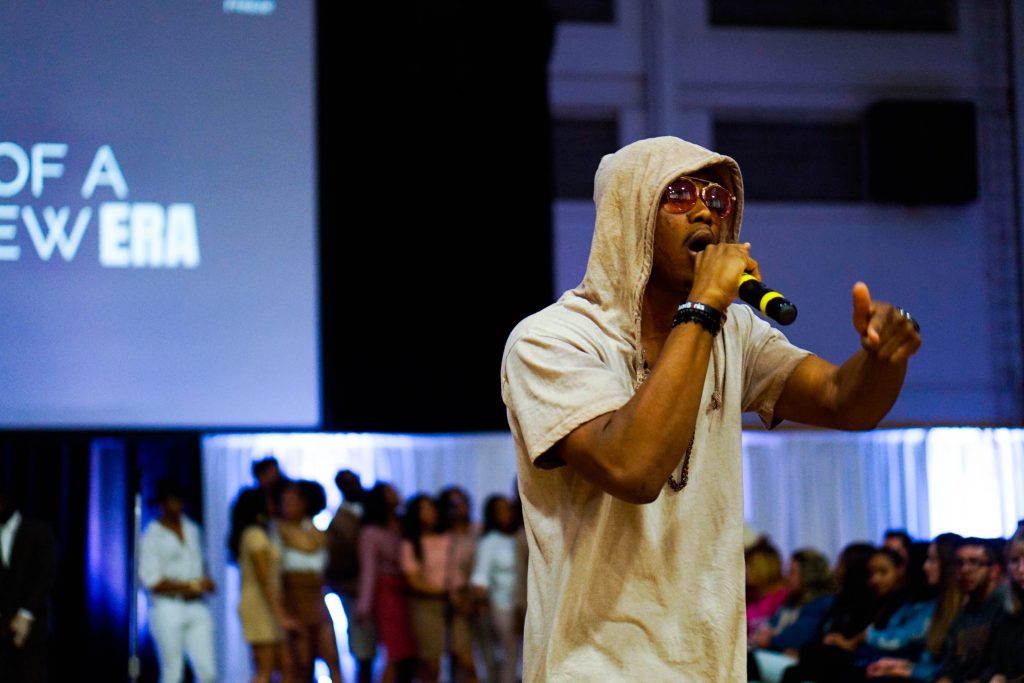 From a young age, Central Michigan University senior Aaron Johnson’s soul and passions have been deeply ingrained in music. He attributes that passion for music to his mother, Darlynn Johnson.

Darlynn, who is a professional gospel singer, and his father who works for General Motors, raised him along with his six other siblings.

They moved around a lot throughout his life, but everywhere he and his family went they always attended non-denominational churches. Johnson and all of his siblings participated in the church choirs and music while their mother participated in the praise teams.

At age four he began playing the drums. At nine years old Johnson was playing the drums in his band until he was 12. Since then, he’s performed as a drummer in front of crowds as large as a few thousand people.

When he was a senior in high school Johnson was a part of a student rap group called “Christians in Paris.” But he soon realized that going out on his own was the right way to go for his music career.

“I realized they weren’t all as serious about it as I was and so I kind of thought to myself, ‘I wonder why they aren’t taking this seriously?’ I just realized that it wasn’t just for fun to me…” Johnson said.

From that moment Johnson has been writing, rapping, and producing his music on his own. His sophomore year at Central Michigan University was when he really began seriously pursuing the rap scene, and at the same time Johnson had begun teaching himself how to play the piano as well. He decided against having outside help for his rap career due to finances and personal creative reward.

“I decided I’d rather spend money on myself than conform to a label right out of the gate and risk giving away the rights to my music,” Johnson said.

Losing the rights to music and creative freedom is a serious worry for many artists today. Binding contracts with record labels signed in order to get their music heard by larger audiences can sometimes cost more than just regular currency.

But on March 17, 2017 Johnson released his first full-length album, “Break Strain” as CODA, his artist pseudonym—without the help of a record label.

Johnson based his pseudonym CODA on the common symbol found in classical art song sheet music.

“[Coda] essentially means ‘the end of the piece is coming up.’ My desire is to put an end to the commercial nature of things that are societally stagnant or things that keep people from progressing and growing themselves. So since I desire to put an end to certain things, it seemed fitting for my name to be CODA with the slogan, ‘this is where it ends,’” Johnson said.

He even uses that same ideal as the title of the last song in his first album.

The album is set up as an epic tale portrayed through the use of motivational samples, dramatic soundtracks, and conscious hip hop/rap lyrics. All of it is produced and performed to awakening perfection.

“Break Strain” was recorded on CMU’s campus in the Moore Media Records recording studio, but now Johnson records at studios in Southfield or in his room.

Stylistically, Johnson views his music and message being similar to that of artists like American rapper Kendrick Lamar, Lecrae and Lupe Fiasco.

While many will attribute their inspirations to other artists, Johnson finds inspiration within himself and his own creativity.

When Johnson graduates from CMU this spring with a degree in Music and Entrepreneurship, he’ll be moving to Southfield, Michigan to start his full-time job as the Worship Director for Highland Park Baptist Church’s youth program. He’ll also be continuing to pursue his personal career as a rapper.

“Essentially the worship leader gig is a five-day-a-week job that involves me chillin’ in my office some of those days and being available and running rehearsals once or twice a week plus Sunday service. I kind of plan to use my nights to work on my personal music and production and what not so I can keep them separate, but growing at a healthy rate as well,” Johnson said.

Johnson is most excited to have the chance to be leading and teaching high school students.

As a Christian, Johnson enjoys Highland Park Baptist Church’s non-denominational environment because that’s the type of church his family has always gravitated toward.

Despite his background and roots in gospel music, he doesn’t really listen to it that much. But at this year’s fashion show put on by the Organization for Black Unity Johnson gave the final performance for the event with the help of powerful vocals provided by the CMU gospel choir called Christ Central Choir, “C3,” in front of hundreds of people. It was one of his biggest crowds as a rapper so far. 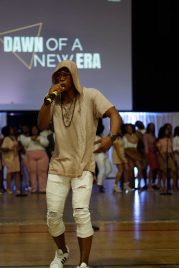 Utilizing the choir for his performance was an idea that he had been thinking about since he began writing the song. He wanted the song to have a soulful feel to it.

“I would say that her [his mother’s] influence is probably the reason I was more inclined towards that style, but as I grow older I see the impact it has on people and I like that more than commercial rap,” Johnson said.

Johnson sang an original song called “LeveL,” from the album he’s working on currently. While this next album isn’t set to release until this summer, we already know it’s the first installment of a mix tape series.

“I can’t reveal the name of the project just yet, but I can say that it will be a 10-track project with all high energy summertime bangers to vibe to. It’s a much more personal look into my mind as an artist and human being trying to make sense of different situations I live through and putting them to music!”

Johnson’s mother is proud of his rapping career.

“She always says she loves my music… I kind of got the passion from her,” Johnson said.