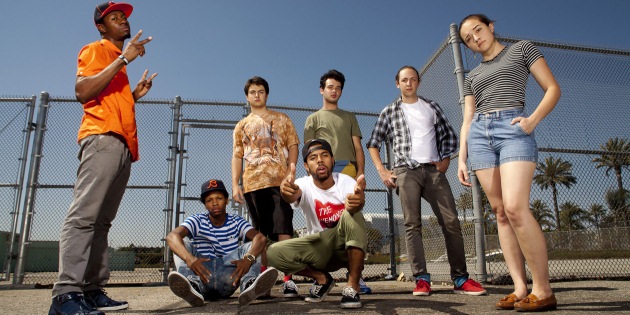 Kids These Days are a band of very talented Windy City teenagers making some of the best music on the Chicago scene right now, pushing the envelope as far as the genre goes.

It’s hard to place KTD into one specific niche; their music is really a little bit of everything. Led by the lyric-slinging frontman Vic Mensa, the group’s music includes everything from dulcet female vocals to soulful trombone solos.

Kids These Days’ first buzz-worthy release was a seven song EP entitled “Hard Times,” featuring the singles “My Days,” “Darling,” and “Summerscent,” which all have music videos available on YouTube.

The success following the “Hard Times” project allowed KTD to play sets at SXSW and Lollapalooza, and the band was featured on Conan when the show did a weeklong Chicago stint this summer.

Kids These Days’ newest and first full-length project, “Traphouse Rock,” was released last week. “Traphouse Rock” is available for purchase on iTunes or for free download.

The album features the band’s smooth vocals on tracks like “Doo-Wah,” an in your face, lead single titled “Don’t Harsh My Mellow” and the jazzy motif is found best in tracks like “Bud Billiken” and “Who Do U-Luv.”

Currently, the band is touring with Chuck Inglish of The Cool Kids and Asher Roth. Stops and dates for the tour can also be found at the band’s website under the “Shows” tab.

“Traphouse Rock” also hosts a guest spot for former Get Familiar! artist, Chance The Rapper, on the track “Wasting Time.” Much like Chance’s “10 Day,” this is one of the year’s best musical projects, so stop sleeping, Get Familiar!