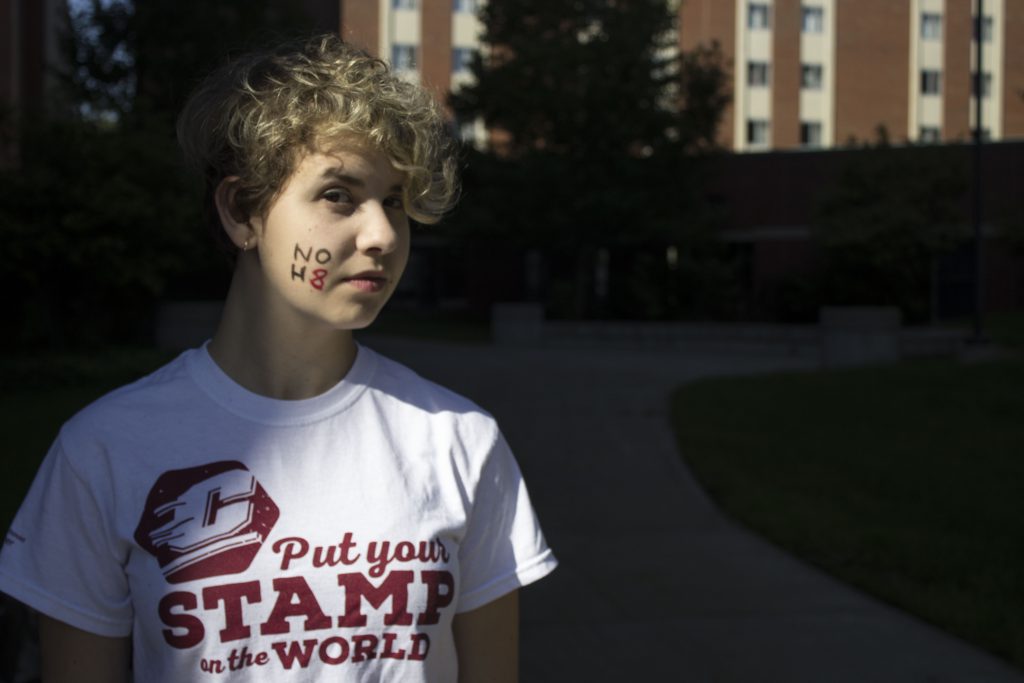 In honor of National Coming Out Day, I want to share something personal with Central Michigan University.

This is not the first time I’ve ever gone completely public about something so significant –let me just cut right to the chase.

My name is Jordan Lynne McGee and I am a lesbian.

I guess I always knew there was something different about me as a child. I couldn’t understand it, but as a young child I was drawn to more masculine toys and clothing. I ditched the Barbie dolls, and hot wheels were my toy of choice. I loved wrestling with my male buddies and constantly found myself playing in the mud. It was obvious I had a tomboy persona.

Even at 6-years-old, I was mistaken for a boy by multiple classmates, which only led me to tears on the drive home. Especially when girls would tell me I wandered into the wrong bathroom. It did not help that I also had an exceptionally close-cropped hairstyle. By no means does this predict one’s future, developed sexuality, but it definitely led me to find myself once I hit puberty.

Throughout my middle school years, I did not notice the appearance of any gender, and I did not begin hitting puberty until my freshman year of high school.

As soon as I entered high school, I realized that I still had no interest in dating boys, as most my friends were. I felt indifferent when I heard my friends talking about the cute boy walking down the hall. However, I never initially realized that I was attracted to girls. It gradually came to my mind.

I thought that having butterflies in my stomach while other girls walked past me was a normal feeling.

I did not put two and two together until early sophomore year of high school. I started becoming attracted to my friends that were female and I did not understand why.

In my household, being attracted to someone of the same sex was not allowed. In fact, it was ingrained in me to feel uncomfortable around other gay people and was even told by a family member at 12-years-old that “gay people make [them] sick to [their] stomach. That is not normal. Those are people of the devil.”

At that time, I thought nothing of that statement. But at 16-years-old, finally understanding that I was not straight, those words kept playing in my head over and over again. I remember the day I was alone in my house when I stood in front of my mirror and said “I am a lesbian” and bursting into hysterical tears. I remember telling my best friend, who was the first person I ever told through a message because I was terrified what he would think, and was terrified what I would do if my parents somehow found the message.

I remember having my parents finding out and ultimately thinking I was somehow disgusting and crazy.

However, I remember being reminded positively of my identity. I recall every single one of my friends being accepting of me. I recall a lot of distant family support when I came out via Facebook last year. I recall being able to take another female to my senior prom, and then winning prom queen because my high school was so accepting of the LGBTQ+ community.

Currently, I am just like any other 18-year-old first year student that loves music and a good nap. I just happen to like girls.

I am not my sexuality. My sexuality does not define me. It is only a sliver of my identity that I am unable to change.

I still endure the awkward questions about whether I have a boyfriend or comments on how my adult body attracted other boys. Since coming to CMU, I no longer feel ashamed of who I am. I take pride in my identity.

CMU offers a safe space for the LGBTQ+ community, including multicultural advisers in every residence hall and Spectrum, an LGBTQ+ alliance on campus.

Today is National Coming Out Day. Please support a friend or family member if they come out. Remember, everyone’s coming out stories are different, and do not expect each one to sound the exact same. Sharing something as intimate as one’s true identity can be scary. They just wish to feel accepted. We all need acceptance from our loved ones. My name is Jordan Lynne McGee, I am a lesbian, and I want to wish everyone a happy Coming Out Day.