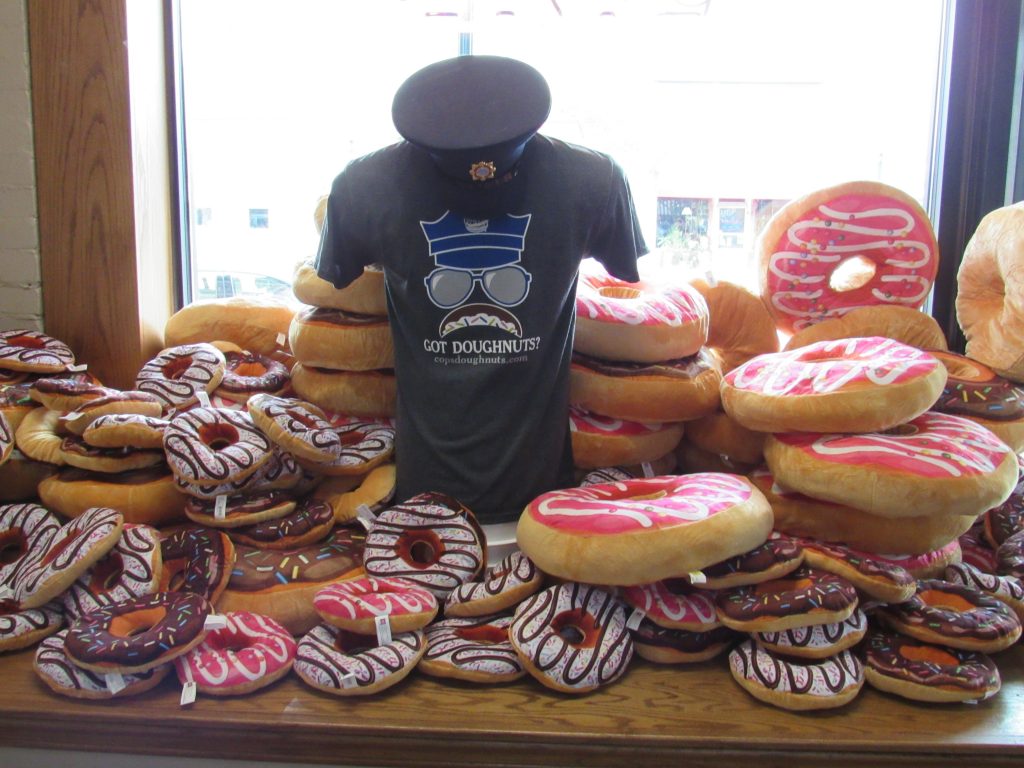 Story and photos by Dan Corcoran

Officer Alan “Bubba” White can sum up the success of the Cops and Doughnuts franchise by using the Simon Sinek quote, “People don’t buy what you do, they buy why you do it.” White is one of the founding members of the famous Clare eatery, which now has four other locations throughout the state.

The building, located at 521 N McEwan St., began as a bakery in 1896 by John Foss and his wife Mary, who had owned a bakery in neighboring Farwell and opened the Clare location after a grain elevator was built, which they predicted would increase the population. 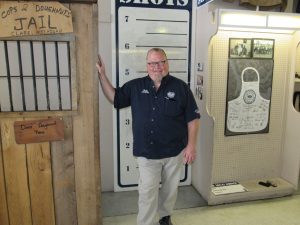 “The Fosses saw Clare was going to grow so they bought a lot of land. They built the building designed by them as a bakery,” White said.

The bakery opened on July 1, 1896. According to White, the family stayed upstairs and the bakery showroom was what is now floor level and they baked everything in the basement.

The Foss family owned it until 1967 when it was purchased by another family who owned it until the 1990s. Then the bakery went through a couple different hands, White said, until 2009.

According to White, the unemployment rate at the time in Clare was nearly 20 percent and there were 11 closed stores in the two blocks of downtown.

“We called the owner and said why don’t we buy it and by we I mean every full-time member of the police department,” White said. “We saw a marketing opportunity there. We leased the building and at the end of the first year we bought the building.”

On July 1, 2009, the 113th anniversary of the store’s opening, it was bought by the nine police officers and became Cops and Doughnuts. Since its opening, there have been four other locations that have opened: Gaylord in September of 2015, Bay City in June of 2016, Mt. Pleasant in May of 2017 and Lansing in May of 2018.

When asked what one of the biggest challenges of owning the business was, White pointed to the current economic cycle.

“The challenge is finding employees,” he said. “We are in a negative employment cycle for our direct retail. Every single business I know has openings and we can’t fill them.”

“We had one employee and about a half dozen high school kids, the oldest of whom was 16,” he said. “Just keeping up was tough.”

The community of Clare has reaped some of the benefits Cops and Doughnuts’ popularity as well.

“Ten new businesses opened. They opened because of us. We bring around four to five thousand people to downtown Clare every year,” White said.

The store has even attracted visitors from many other parts of the world.

“The farthest anybody has ever travelled specifically to visit us is from England,” he said. “They saw us on ‘Fox and Friends’ and started following our social media pages. It was a middle-aged couple and they always wanted to visit the United States and they planned their trip with us as their destination.”

Central Precinct, the Mt. Pleasant store located at 1327 S Mission St., has a day-old doughnut special that has become popular with CMU students. 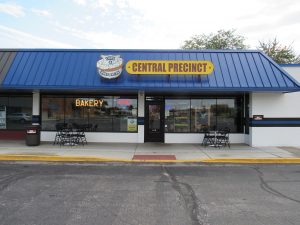 “There’s a nice deal there,” said employee Ashley Weslock. “At the end of the night anything that we don’t sell we put into our day-old cabinet and we sell them for eight dollars a dozen the following day.”

What separates Central Precinct from the many other bakeries and coffee shops in Mt. Pleasant, Weslock says, is the way the food is prepared.

“Everything we do is made fresh every morning,” she said. “We have nothing that isn’t homemade.” 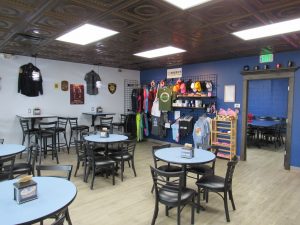 Weslock has worked for Central Precinct for seven months and has enjoyed it.

“It’s a really fun atmosphere,” she said. “I love being able to interact with everybody and I’m selling doughnuts. You can’t get much better than that.”

White maintains that the story of Cops and Doughnuts has much to do with the success of its locations.

“We don’t sell doughnuts, we sell cops selling doughnuts. We sell that experience.”