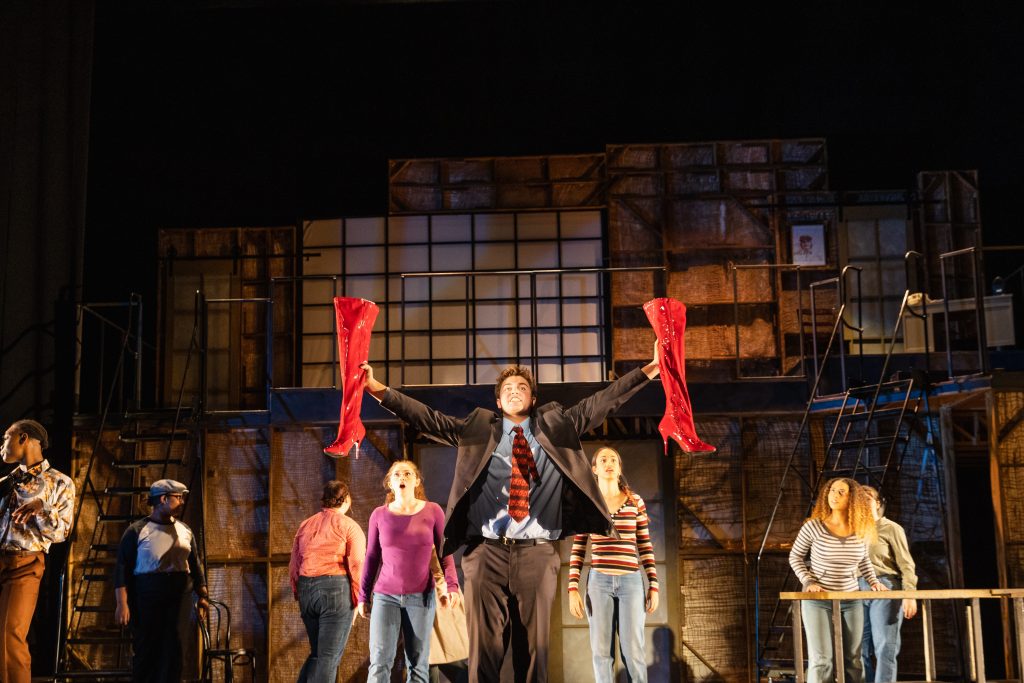 Story by Izzie Pasciolla, Photos provided by the CMU Theatre and Dance Department

The infamous red glittery boots hit the stage of Bush Theatre last week as audience members were encouraged to “Just Be” during the CMU production of “Kinky Boots.” Charlie Price, played by CMU freshman Lucas Colbatzky, goes on a self-discovering journey in this musical as he figures out what he’s truly passionate about.

This was Colbatzky’s first show at CMU. He performed alongside Justin Rivers (Lola) and Dallas Dudley (Lauren).

The show is about “accepting other ideas” according to Colbatzky. He describes Charlie Price as an average character who wanted to follow his dreams.

“Eventually he finds his passion and purpose and he makes it happen,” he said. “So by the end of the play I’m a developed character and I’m a happy character.”

Colbatzky has enjoyed this role because the character is so similar to himself and his experiences.

“As my director has said many times throughout rehearsals, ‘It’s you,’” he said.

Colbatzky really enjoyed the message of accepting others in this play and hopes that CMU students and others from the community were able to open their minds to the way other people live.

“It just shows you another point of view,” he said. “If for no other reason than that, it’s a great reason to put the show on.”

Colbatzky said he had an amazing time participating in this production and he loved the characters and the story.

“Every week I walk in and there’s something that just got added to our show and every time I walk into rehearsal and I’m like ‘Wow, this is so much fun,’” he said.