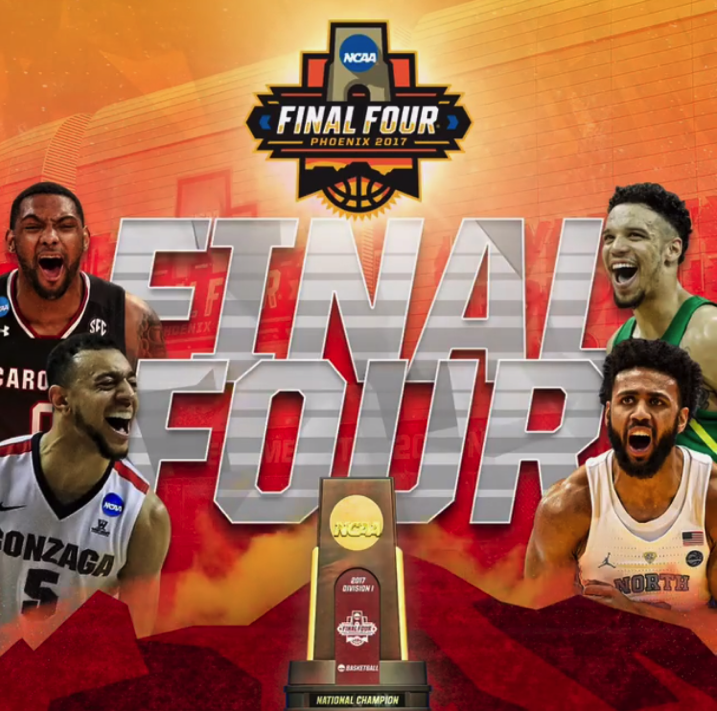 As March Madness comes to a close, people are on the edge of their seats waiting to see who will be crowned the winner of the tournament. After last weekend’s round of games, the Final Four consists of Gonzaga, Oregon, North Carolina and South Carolina.

According to ESPN, over 13 million brackets were filled out this year. While some are filling out the brackets to win money, others are filling it out just for fun.

Before making her bracket, junior Morgan Miller first looks at the rankings of the team.

“If there is a big gap, say like, third ranking against a 12 ranking, I pick the highest ranked,” Miller said. “But, if it starts becoming close in numbers, I pick off what jersey color I like the best, [that’s] not a joke. When it started getting down to [Elite Eight] and Final Four, I thought about the underdogs, and once again what jersey color I liked.”

When picking who was going to win it all, Miller always goes for the underdogs.

“I picked UNC to win because they are the underdog [that] nobody sees coming to win it all,” Miller said.

Similar to Miller, junior Nate Johnson also created his brackets from watching past games and basing choices on the team’s seed.

“Bracket creation is usually based on seeding and how each team matches up with one another,” Johnson said. “You also have to consider common upset games such as a 5 versus 12 seed matchup. Normally, the higher seeds are more likely to advance farther in the tournament.”

Sometimes it can be difficult to predict the perfect bracket, especially when who you have winning the tournament is out of the running. For Johnson, this was the case.

“I chose Villanova to win it all because I thought they were the best overall team in the tournament offensively and Defensively,” Johnson said.

Freshman Allison Weber, loves sports, but admits she’s not always the most knowledgeable when it comes to picking her bracket.

“For me, I use rankings to make decisions at the first couple rounds, then from there,” Weber said. “I go off of the little I do know about certain teams or just random pick.”

While Weber may have had little information when picking her top teams, she did select a team that made it to the final four, UNC.

“That’s pretty much how I did this year’s bracket, by rankings,” Weber said. “And then used whatever little knowledge I do have. For example, I knew MSU wouldn’t go far cause they haven’t had a good year.”

When filling out a bracket for March Madness, people don’t have to know everything about every single team that is competing.

When starting her bracket, junior Drew Villarreal didn’t know much about college basketball.

“I don’t have a lot of prior knowledge about college basketball,” Villarreal said. “So I did some research and looked at the predictions of the games and based it off that.

Like many others, Villarreal picked UNC to win the championship.

“A lot of it was based off research and reading articles,” Villarreal said. “I ultimately went with my gut for the top two and winner.”

The next three games are sure to bring upsets to some, while bringing celebration to many.

On April 1, South Carolina is set to take on Gonzaga and North Carolina will face Oregon. The NCAA championship game takes place April 3, with the final two teams playing head to head for the title.