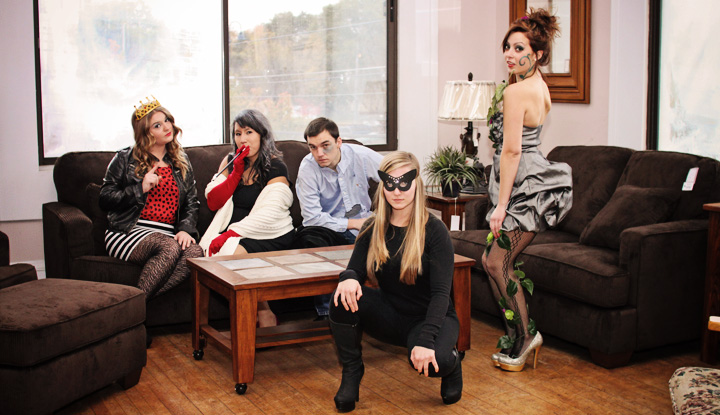 It’s not often you see Catwoman, Cruella De Vil, Harvey Two-Face, Poison Ivy and the Queen of Hearts sitting on the same couch.

For the Halloween-inspired photo shoot, the style staff decided to be villains. Picking them was easy. We wanted two things: we wanted people to know who we were and we wanted the costumes to be easy to put together.

“I picked Cruella De Vil because she was the first villain that came to mind,” Ana Dickerson said. “Plus, her outfit is really simple.”

To be Cruella De Vil for Halloween, you need three things: a black dress, a fur coat and red shoes. A long cigarette holder wouldn’t hurt, either.

“I would definitely say Cruella is one of the easiest for a non-creative person to pull off,” Ana said. “The fur coat was the hardest- even Goodwill didn’t have any!”

Laura DuCharme decided to be Catwoman for similar reasons.

“Catwoman was one of the first female villains who popped into my head when the photoshoot was brought up,” she said. “I feel that she is iconic and the costume is easily recognizable.”

Like Ana, putting together the Catwoman costume was relatively simple.

“Putting together the costume was quite easy,” said Laura. “I basically live in black leggings, and everybody owns a black T-shirt.”

“Luckily, Morgan owned a pair,” she said. “The only thing I had to buy was the mask, which was only $2 at Target!”

Hannah Quick chose to be the Queen of Hearts for one reason: The color scheme.

“I love red,” she said. “Plus, the original ‘Alice in Wonderland’ is so classic.”

There might have been one other, slightly sparklier reason.

“Getting to wear a crown for a few hours didn’t hurt either,” she added, laughing.

“I didn’t want anything too obvious,” she said. “I ended up using pieces I had in my closet- all I had to buy was blue eyeshadow and a crown!”

As for Dominick Mastrangelo, well, being the only male writer on staff meant he was pretty much roped into doing the shoot.

“I hadn’t even put any thought into my own costume, let alone one for a giant photo shoot,” he laughed. “But as we got closer to the shoot, I had a better idea of how to make Two-face come to life.”

The idea for him to be Harvey Two-Face came up at a meeting, and like the shoot, Dom graciously went along with it.

“It was pretty easy to do,” he said. “I took a pair of scissors to an old dress shirt and slung a jacket over my shoulder. Morgan helped me with my face and I was good to go.”

Which brings us to me, Morgan. As the Style Editor, I oversee the Style section. I dressed as Poison Ivy because she’s my all-time favorite villain. She’s got great hair, a killer garden, and she beats up all the boys, all while wearing stilettos. What more do you need from a villain?

To make the costume, I bought a ruffled dress from Goodwill, fishnets and a ton of plant-like things. I glued flowers and vines all over the dress and tights, added some green eyeshadow and bam, I was Poison Ivy.

We chose villains, but Halloween is what you make it. Whether you go big or go small, don’t let it pass by without doing something.

*A special thank you to Gray’s Furniture in downtown Mount Pleasant for letting us shoot there.