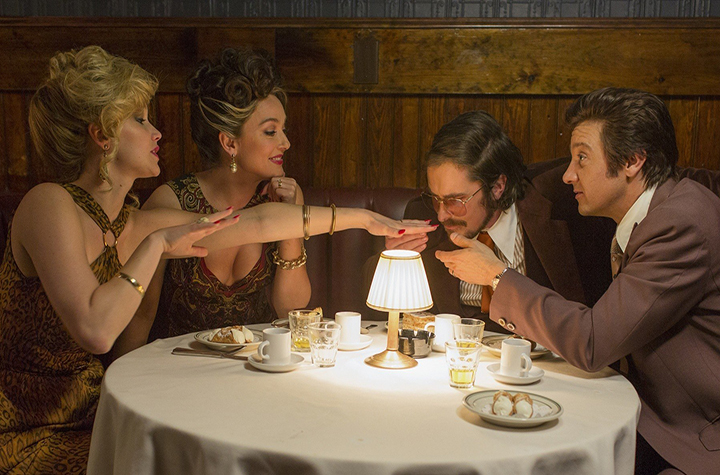 The people in “American Hustle” want things. They want possessions, they want respect, and they want someone who will still care about them after they’ve made a mad dash toward everything else. And we want to keep watching them.

Directed by David O. Russell and based on the 1978 ABSCAM FBI operation, “American Hustle” is a story of ensnaring corrupt politicians and is more than a little embellished (the opening card that reads “some of this actually happened” traps a laugh from the audience almost immediately). That seems appropriate considering it follows con artists Irving Rosenfeld (Christian Bale, he of the surprising beer belly and comb over) and Sydney Prosser (Amy Adams, she of the sad, stained glass eyes).

These two lovers and highly skilled disciples of deceit start the film embezzling money from desperate men, when they are caught by FBI agent Richie DiMaso (Bradley Cooper). Overeager and starving for recognition, DiMaso says he’ll let them go if they help him catch other con artists. This soon leads them to Carmine Polito (Jeremy Renner), the compassionate mayor of a city in New Jersey called Camden, who wants to revive New Jersey’s economy by starting up large casinos in Atlantic City and is not opposed to using less-than-legal means to do so.

Rosenfeld and Prosser are then essentially forced by DiMaso to pull an admittedly overwrought scheme to catch Polito and other politicians in the act of giving and accepting bribes. This leads them to interactions with the mob — and an actor familiar to crime films makes a fun, uncredited appearance — conflicts with Irving’s bitter wife Rosalyn (Jennifer Lawrence), and something of a love triangle between Irving, Sydney, and De Maso. One can hardly tell who is manipulating who; that however, is largely the point.

The film has energy coursing through every frame, utilizing various exciting camera angles and techniques, and working with a brilliant arsenal of songs to consistently keep and demand attention as the cast lies, cheats and steals to get what they want. These people probably wouldn’t be able to sustain themselves through other means, and as the unnecessary narration at the beginning of the film constantly hammers home, they do what they feel is necessary to “survive.”

The performances here are all strongly done, with the characters’ feelings of perpetual desperation palpable throughout as they move from one fib after another. Bale plays Rosenfeld like a flabby, yet ultra confident shark who has to keep moving and keep the lies going.

Adams is hypnotizing; her beauty paired with eyes containing immense pain. One is rarely sure where her royalties lie, or what she wants besides money and her own freedom, but that may also be due to her character — despite Adams’ great performance — is hardly ever without one of the male leads, with a good portion of her scenes spent on her relationships with the men.

Lawrence’s Rosalyn is a virtual force of passive aggression, genuinely wronged by her husband but using emotional manipulation to choke everyone she meets. Her breed isn’t entirely different from her husband’s, though Lawrence makes you feel for her. Best in show, however, is arguably Cooper.

What could have been a cartoon-ish foil for Bale and Adams is made into a human being dying to get some respect and feel good about himself. Though by no means honest or earnest, he wants to fulfill himself so badly that he fails to think about his actions, blatantly spilling out his emotions in situations that require nothing but subterfuge.

“American Hustle” as staged by Russell, is a film about some particularly skilled liars and the giant scheme they pulled, but the true focus is on the characters and how they lie to themselves.