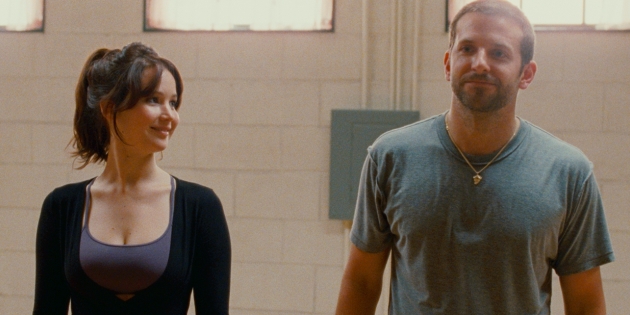 “Silver Linings Playbook” ends on the thrillingly odd culmination of a dance competition and an NFL football game, the result of a high stakes parlay bet between an obsessive compulsive Philadelphia Eagles fan (Robert De Niro) and a rival gambler who favors the Dallas Cowboys (Paul Herman).  It is a fitting conclusion given that the rest of the movie, for all its seeming narrative conformity, is a rampant, lively piece of work that does what it wants, when it wants.

Part of the reason for this is that its two main characters, two damaged, mentally unstable people played by Bradley Cooper and Jennifer Lawrence, do that as well and director David O. Russell is just trying to keep up with them. It could also be the other way around, though.  Russell has such a lively way with camera movement and atmosphere that the constant sense of motion and organized chaos seems exhausting. For the most part the performers, especially Lawrence, are more than up to the task.  She makes her character, Tiffany, such a force of nature that the miscasting of Bradley Cooper is barely noticeable.

Like in Russell’s last movie, “The Fighter,” this is more of an ensemble effort than based off of a single performance.  It is about Pat Jr. (Cooper) recovering from a mental breakdown after catching his wife cheating and beating the other guy within an inch of his life, but it is also about his dad (De Niro) and mom (Jacki Weaver) coming to terms with his condition.  It forces an American family to confront mental illness, a bold thing to do in a country that resists that confrontation increasingly to its own detriment.

Their reaction and response to it as well as Pat’s friends provides the movie with much of its volatility.   Minor scenes come undone emotionally and evolve into huge confrontations; moments of understanding and kindness can come out of chaos.  Russell thankfully avoids using sickness as a punchline or even a focus.  It is a part of the story, but it is not the story.  Nor is this movie completely a romance, though it is part of the inevitable third act payoff.

Russell doesn’t really sell out in the conclusion because it feels earned.  There are scenes in “Silver Linings Playbook” that are as good as anything else this year, because even if they’ve happened in other movies they haven’t quite felt like this before.  The best example of this is a masterful confrontation scene before the dance competition that Tiffany and Pat are preparing for; Pat is confronting his parents, his dad is confronting the fellow gambler, Tiffany is confronting everyone.  They let all their emotional baggage out and set up the finale, but powerful emotions are flung so sincerely as to trample any thought of narrative laziness.

The specificity of the culture and the slyness behind the romance makes the movie feel like a more positive version of this year’s “Dark Horse.”  In fact, that could’ve been its title had it not been adapted from a book.  Russell uses none of the empathetic irony that Todd Solandz does in his movie, but the critiques are still built into the happy ending.