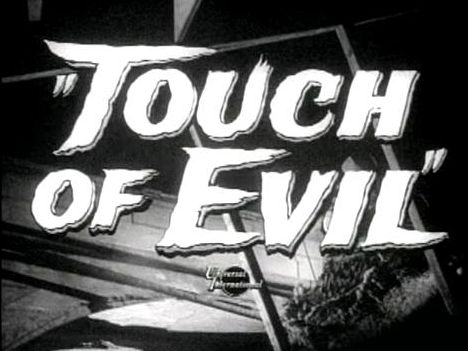 Those who love movies often have an appreciation for film noir, or “film black.”

Dark in both subject matter and in the amount of light shown on screen, there’s something for everyone – from complicated story plots and stylized cinematography shadows to gang violence and interesting characters perpetuating chaos. In a visual medium, it gives filmmakers a chance to explore the darkness of the human soul and often the horrors humans wreak on each other.

Orson Welles’ “Touch of Evil” (1958) is often cited as the last breath of life to come out of the film noir genre, and for a damn good reason. Most of the usual genre trappings here are under the impressive treatment of Welles.

It is almost a cliché to begin any conversation about Welles’ film with its legendary three-minute unbroken shot following a car with a ticking bomb in the trunk as it eases through the apparently trash-ridden streets of a town on the United States/Mexico border.

In this unedited shot, the camera gives the audience a feel for the atmosphere and knowledge that something bad is going to happen in that car any second. The shot also highlights a moment with  Miquel “Mike” Vargas (Charlton Heston in often mocked but surprisingly effective casting) and wife Susie (Janet Leigh).

The newlyweds begin to kiss when an explosion is heard and we get the first cut since the film started: the ticking vehicle in flames. The mystery that follows is not that complicated and takes a backseat halfway through the film to the conflict between the characters, particularly the straight-laced Vargas, police captain Hank Quinlan (Welles, so huge that the character seems literally bloated with regret) and arguably most affecting of all, Quinlan’s loyal lapdog sergeant Pete Menzies (Joseph Calleia).

It should be noted that because not everything in the film works — it is difficult to know which structural issues can be attributed to Welles, as Universal Studios re-edited the film without his permission before its release. The version here was released in 1998, edited as close to Welles’ note as possible.

This may or may not be why some elements aren’t as effective as others, such as the crosscutting of scenes early in the movie. The scenes with Susie and the Mexican crime stereotypes feel like they’re interrupting the investigation after such effort was put into setting the central crime up.

These complaints seem fairly minor compared to the rest of the film, however, as Vargas attempts to prove that Quinlan framed the man arrested for the crime. Though he’s slowly revealed to not be as outright dastardly as he’s originally portrayed, Quinlan is shown to be a deeply flawed individual as he engages in a power struggle with Vargas. Just try not to feel a little bad and slightly amused by this Jabba the Hutt in human form, since he tries to say he doesn’t drink at one point in the film.

Towards the end of the film, when the conflicted Menzies kills his best friend after discovering Quinlans’ cane at a murder scene, you can practically see the old times the partners have had through Calleia’s eyes.

As is typical with noir, the characters are not entirely black-and-white despite being shot that way. Quinlan has his own reasons for his actions, and when Vargas and the reluctant Menzies confront him, it is Calleia’s character who comes forward as the tragic soul of the film. Devoted to his longtime partner for years, he becomes torn when he starts to notice Quinlan isn’t the idol of justice he thought he was.

Heston and Welles may be the headliners, but Calleia walks away with the film.

Though some scenes aren’t quite as excellent as others, “Touch of Evil” remains a brilliant trip through the darkness of the southern border.