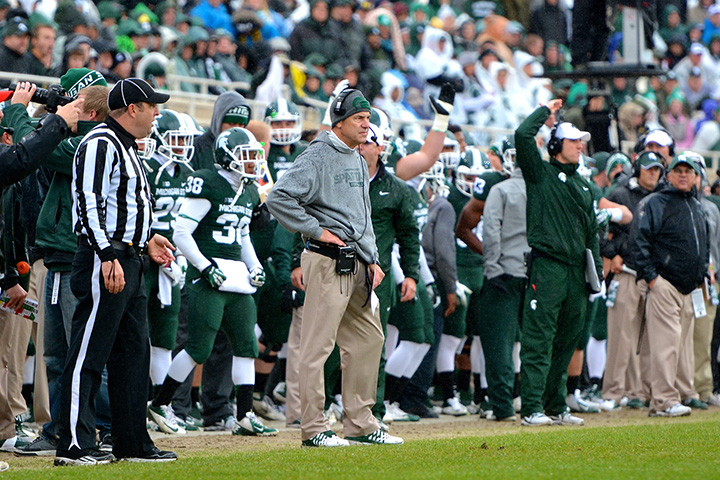 Michigan State no longer has a shot at obtaining a spot in the inaugural College Football Playoff after their reality-inducing loss two weeks ago to the new villain in East Lansing: Ohio State University.

Understandably, concerns over whether or not Michigan State can be the best team in the conference going forward have set in.

Quarterback J.T. Barrett is a redshirt freshman, and an answer for him doesn’t exist for Michigan State right now. Cornerback Trae Waynes could very well be gone after the year and senior safety Kurtis Drummond will be gone due to exhausted eligibility. All that is remaining in the secondary will be a whole lot of uncertainty, probably the most since 2009.

Currently, Michigan State has a few things working for them. The Spartans are 8-2, given a recent 37-15 win against the Maryland Terrapins, with a favorable schedule down the stretch and they still have head coach Mark Dantonio.

Double-digit victories for the fourth time in five years are almost a given, and it most certainly qualifies as something to play for, contrary to what some MSU and University of Michigan fans may be spewing right now. U of M fans are conveniently ignoring that Lloyd Carr and Bo Schembechler’s legacies are built on nine and ten win seasons, and  MSU fans, who are quick to forget where this program was seven years ago when Dantonio began his first season as head coach, are forgetting that as well.

Some are also forgetting where this program was just two years ago, when people attributed Dantonio’s success to the fortune of having Kirk Cousins as quarterback and hitting gold with a few other lower rated guys like Darqueze Dennard and B.J. Cunningham.

The younger fans – they have an excuse, I guess, but they’ll learn. If you’re an older fan and somehow feel the season is a waste because MSU won’t be in the title game, well, you needed to watch more college football outside of MSU throughout the course of your fandom.

The possibility of a season ending in one night is the life of a program in which the expectation is a National Championship. It was just recently that the Spartans realized that possibility.

The overwhelmingly positive momentum of the last 13 months is not lost – far from it, actually – but things came to a screeching halt with the Spartans’ hard loss to Ohio State. A big time bowl win against a good program would do wonders in restoring the feeling that was present previous to this loss.

Michigan State fans have wanted a nationally relevant program for so long, and they have it. I think someone forgot to inform them that the outlook for that isn’t always “Rose-y”.