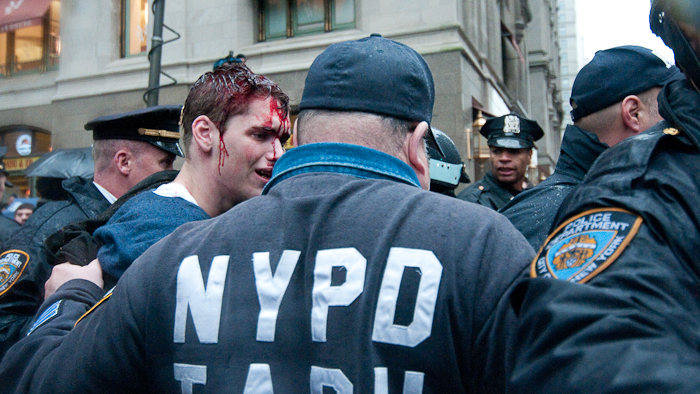 Protesters began their morning at 7am by attempting to block the entrance to the New York Stock Exchange. Many arrests took place on Wall St in the morning.

By early afternoon the occupiers had reconvened at Zuccotti Park, the once occupied park before Nov. 15’s police eviction. The protesters then attempted to march down Wall St but were met by barricades and lines of police in riot gear forcing the protesters back.

The Occupiers were pushed back to Zuccotti park where a cat and mouse game ensued between the NYPD barricades and the Occupiers. For a significant period the barricades surrounding the park where opened and closed so frequently it was extremely difficult to get in- or out of Zuccotti.

Mid-afternoon an odd lull between the occupiers and police occurred when pizza was brought to feed the protesters. Afterwards, a  game of strategies occurred before the occupiers left Zuccotti and marched 2.4 miles uptown to Union Sq. where a student protest was planned for 3p.m.