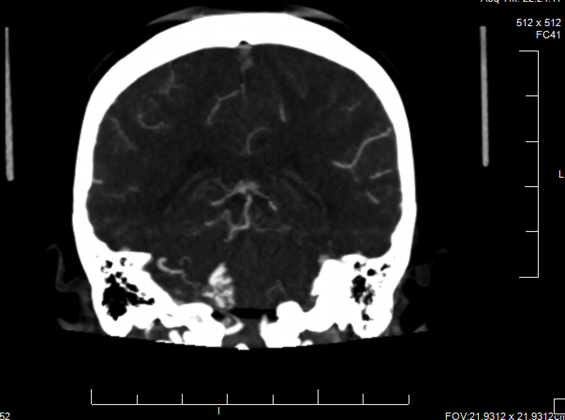 In an instant your whole life can change. You’re never actually told how and don’t want to think about it, but it can, and it can in the most difficult ways that you can imagine. It affects you, your family members and your friends, and it’s amazing to see in what ways people will stop their entire lives to help you.

I was one of those people. I never thought about the fact that something would happen to me and it happened in one of the worst ways possible. My whole life was changed in an instant and although I am still in the process of recovering I know it is something that very well will affect me for the rest of my life.

On Feb. 24, 2015 my brain hemorrhage started. The day began like any other day and I didn’t think anything of it.

I was with my roommate and we were driving around Mount Pleasant before the upcoming spring break. We were on our way to our next stop when I looked over to my roommate Victoria questioning, “What the hell did I do?”

A stabbing pain hit my upper back and neck and one of the worst headaches I’ve ever experienced began to worsen. The pain subsided long enough for me to not think much of it so I went about my day, deciding not to act on it.

Instead I rested in my roommate’s car, and that was when the pain got worse – everything got worse. Looking back now, it was kind of indescribable. The only way that I can think to compare the pain I experienced is being repeatedly hit with a baseball bat to the head.

When my roommate returned to the car, I wasn’t making any sense. My words were slurred, I physically could not walk or see and I couldn’t stop myself from vomiting, along with a long list of other problems. She rushed me to the nearest hospital and after a CT scan the doctors realized the issue at hand was not a common sickness, but a serious issue. I was quickly transported to a larger hospital for treatment.

While the original option was to airlift me, the snowstorm put everything at a pause and I waited for my family to make their way to Mount Pleasant.

The last image I remember ­– my brother crying.

“I thought that was the last time I was going to see you alive,” he said.

Multiple MRIs and angiograms later, the doctors concluded the best option for me was to have gluing embolizations. The doctors at the hospital had their work cut out for them for the day, but mine would affect my whole life.

AVMs are so rare that they only affect 1 percent of the population and most of those people are male. An AVM is a large tangle of veins and arteries that bypass the capillary system. I was not aware of them at all. The brain is the most common and most severe. Aneurysms can form easily because an area of lower blood flow can go to an area of higher flow. That’s what happened to me; two aneurysms were developing in my head and those most likely were what ruptured. The doctors also said they can cause a lot of other problems if left untreated.

These usually form at birth and doctors are still unsure of their detection. I had no idea that I had mine. I had no signs that something was there until the actual hemorrhage happened. This is what happens to most people, they go through life thinking that nothing is wrong, and nothing can happen, that is why AVMs can be such an issue for people.

One year later, I have gone through three brain embolizations, multiple angiograms, countless MRIs, CT scans and doctors appointments. Down the road, I still have more procedures and surgeries including a possible brain surgery and resection where they will actually remove the AVM, or arteriovenous malformation, and hopefully rewire the veins.

I have also had multiple side effects due to AVM, but I have been fortunate enough where they have not greatly affected my day-to-day life. Some people are restricted to wheel chairs or they are not able to speak at all after an AVM rupture, but I have been lucky enough to not have those issues.

Although this is such a rare condition, after the diagnosis it is very comforting to connect with people that are affected by the same condition as you.

The effects of AVMs and aneurysms can last forever, but through a horrible situation something positive can come out of it. I have met great people through this ordeal and I have found that there are so many people willing to help me on the road to recovery.