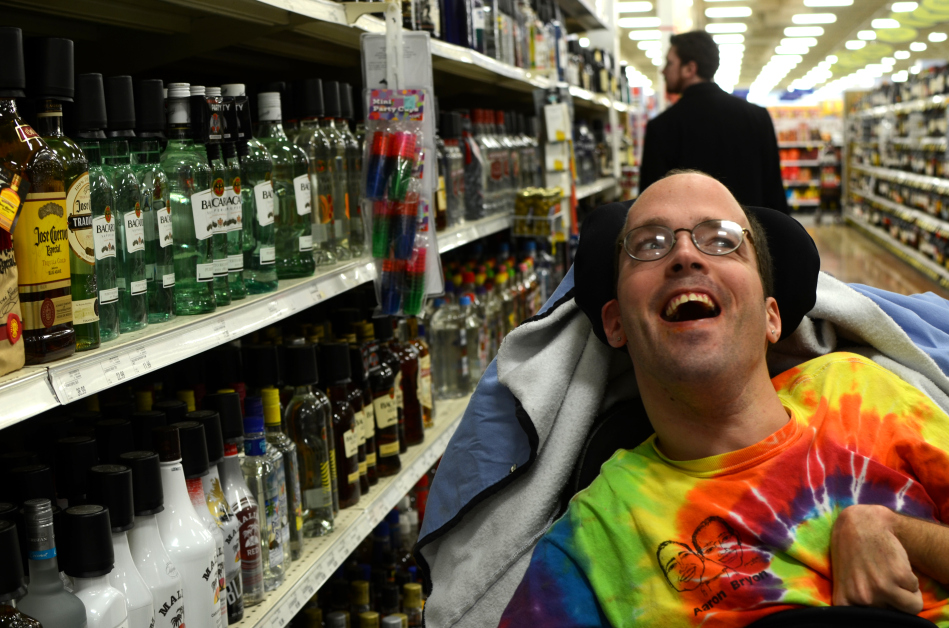 Bryon Beutler is 32.  He lives in Mount Pleasant, originally from Clarkston. In 2010, he graduated from Central Michigan University with a Bachelor’s Degree in News Editorial Journalism and a minor in Sports Studies. During his time at CMU, he wrote sports stories for Grand Central Magazine as well as Mount Pleasant Monthly (no longer in business). He enjoys playing on his iPhone 5, going to The Bird Bar & Grill, drinking Woodchuck and Rumchata, going to Detroit Tigers games and spending time with his friends. Bryon has also been skydiving and can float on his back in the water. Sounds like your average person, right?

The unique thing about Bryon that sets him apart from the average person is that he has cerebral palsy; a disorder that impairs one’s control of their movement because of damage caused to the brain during development. Bryon was born three months premature and was diagnosed with cerebral palsy when he was 10 months old. But that never stopped him from living his life and achieving what some may believe to be impossible dreams for someone with his disability.

Although he may need assistance from caregivers to complete daily tasks such as eating, bathing, getting in and out of bed, getting dressed and so on, Bryon is an extremely hard-willed individual with an amazing personality and a sense of humor that leaves you feeling like you had an intense abdominal workout just from laughing with him so much. 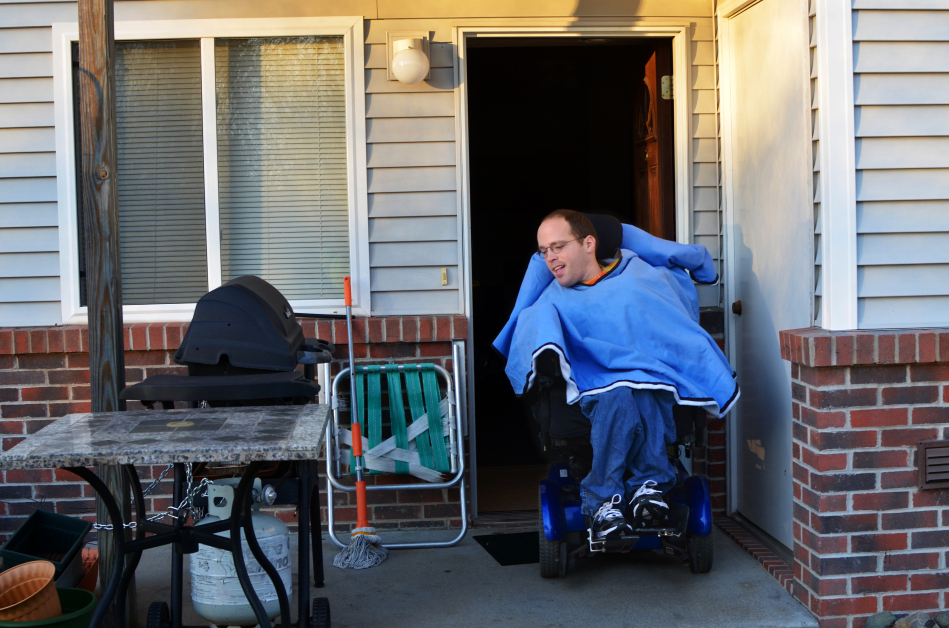 Mount Pleasant resident Bryon Beutler, 32, drives his wheelchair out of the front door of his apartment on Tuesday, Dec. 4 and heads to his van for a trip to the grocery store. Bryon was diagnosed with cerebral palsy when he was 10 months old. 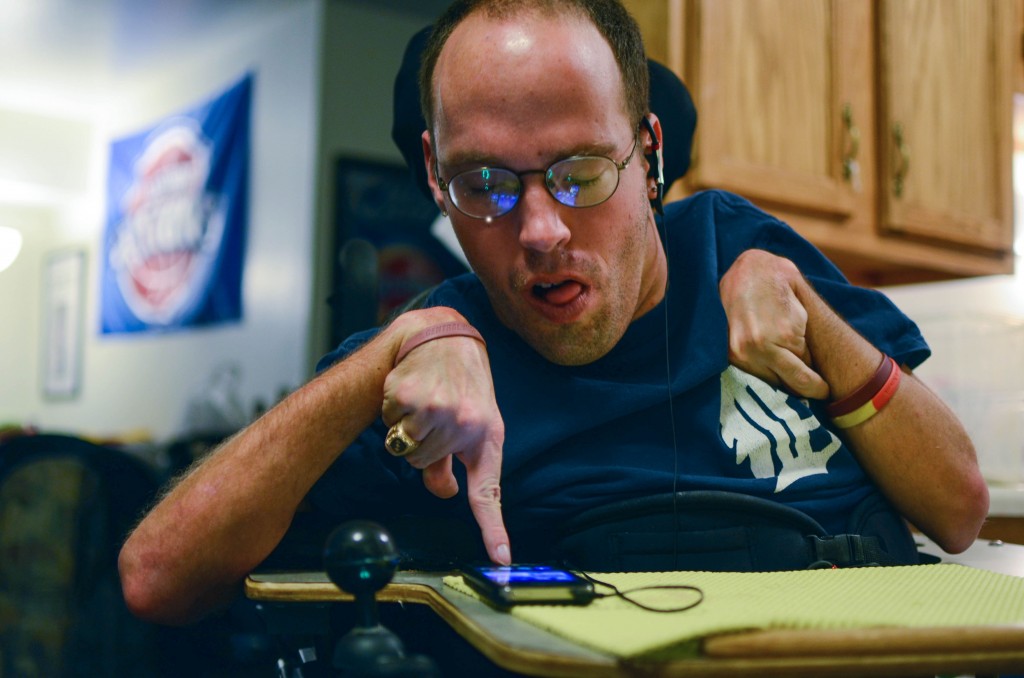 Bryon checks the weather on his iPhone at his home on Thursday, Nov. 29. Because of the limited ability to use his hands, Bryon spends a lot of time playing on his phone because it is one of the activities he is able to easily do. 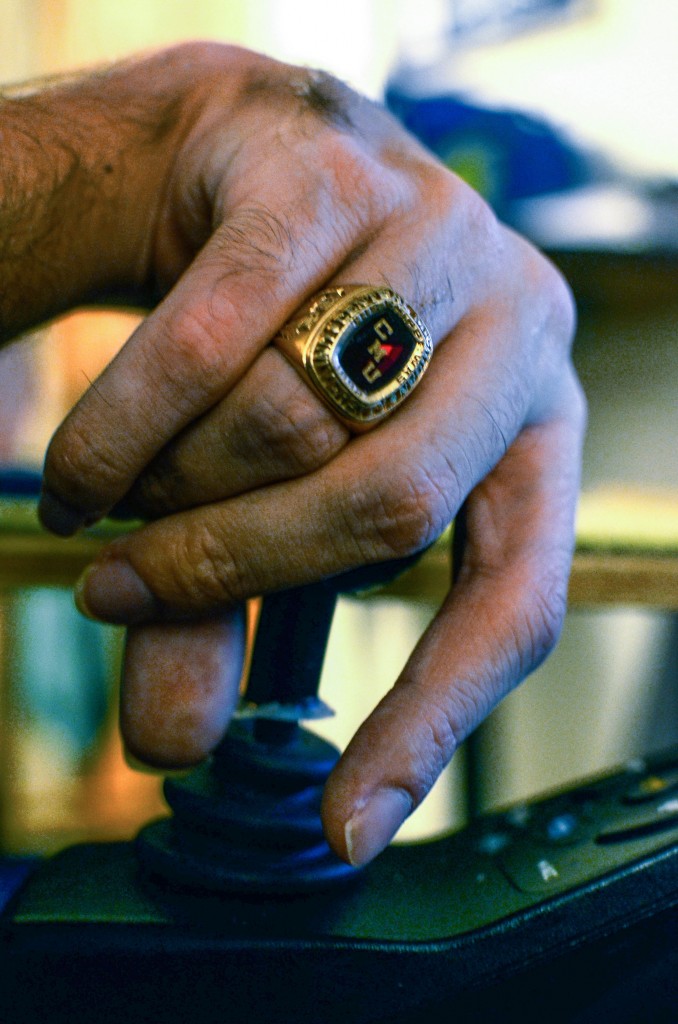 Bryon wears a Central Michigan University class ring on his right hand. After starting school at CMU in 1999, he graduated with a Bachelor’s of Science in Journalism with a minor in Sports Studies in 2010. 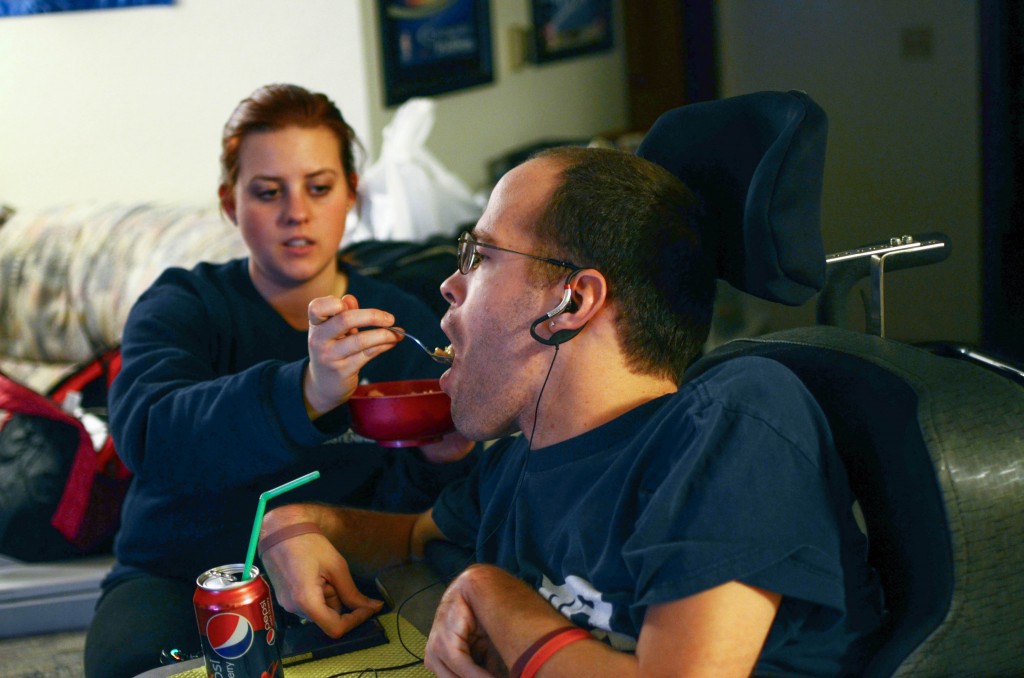 Hope, one of Bryon’s caregivers, feeds him soup for dinner on Thursday, Nov. 29.

During a trip to Meijer on Thursday, Dec. 4 Bryon laughs while asking one of his caregivers to grab him a bottle of Rumchata from the liquor shelves. 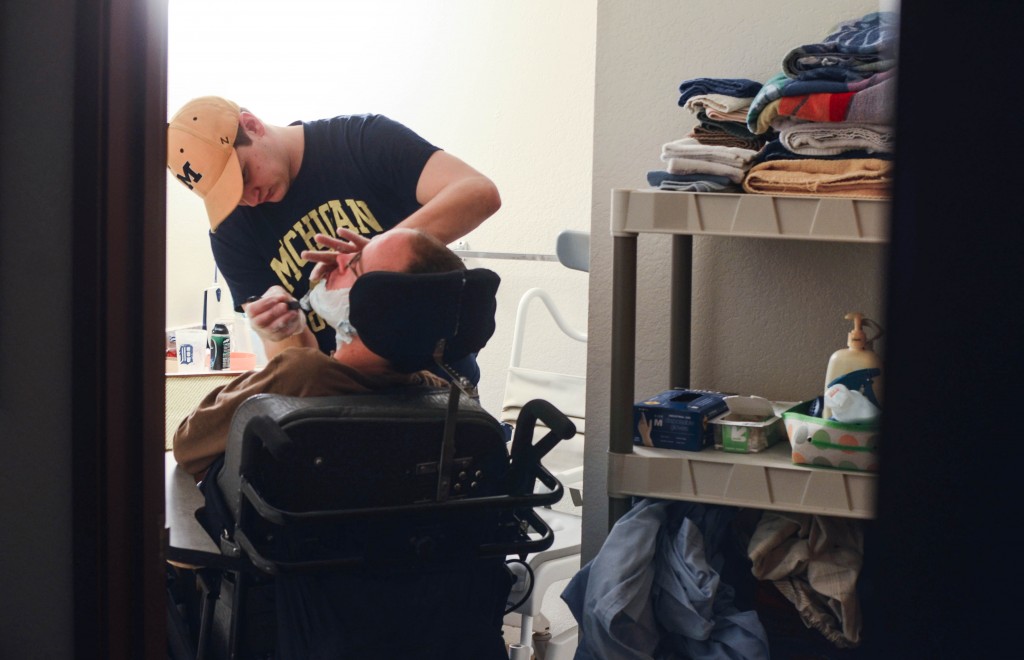 Bryon has his face shaved by his caregiver, Josh, on Tuesday, Dec. 11. 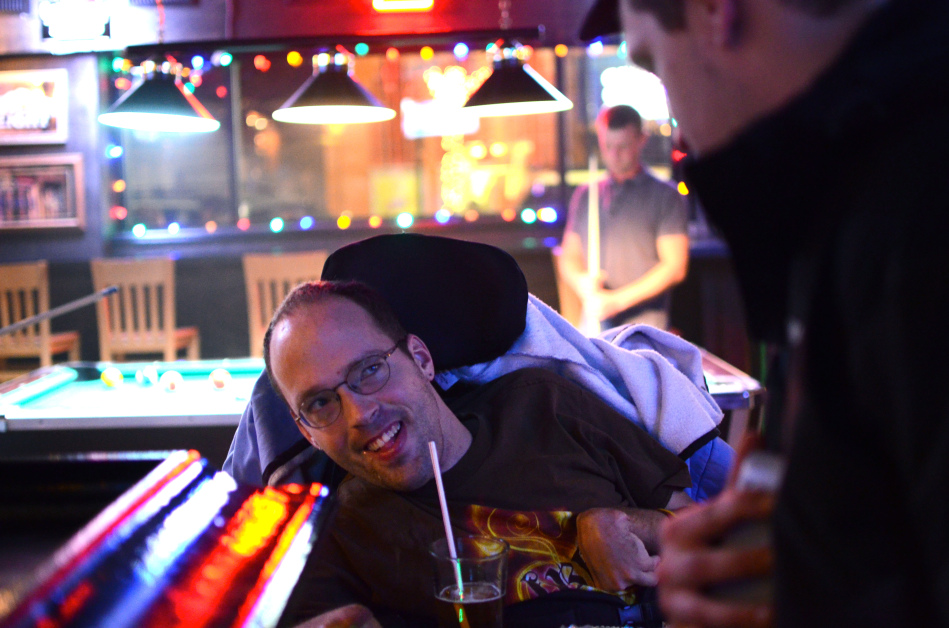 Bryon jokes with Josh while hanging out at The Bird Bar & grill in downtown Mount Pleasant. The Bird is one of Bryon’s favorite bars to spend time at. 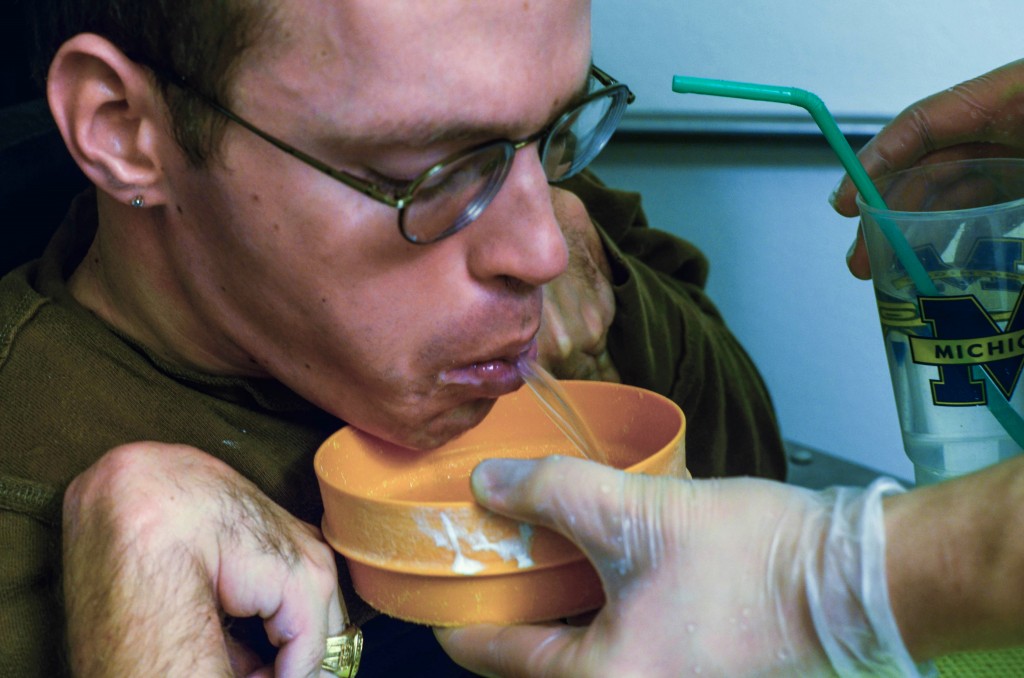 After brushing his teeth, Bryon sucks water through a straw to swish around in his mouth then spits it out into a bowl held by his caregiver, Josh. 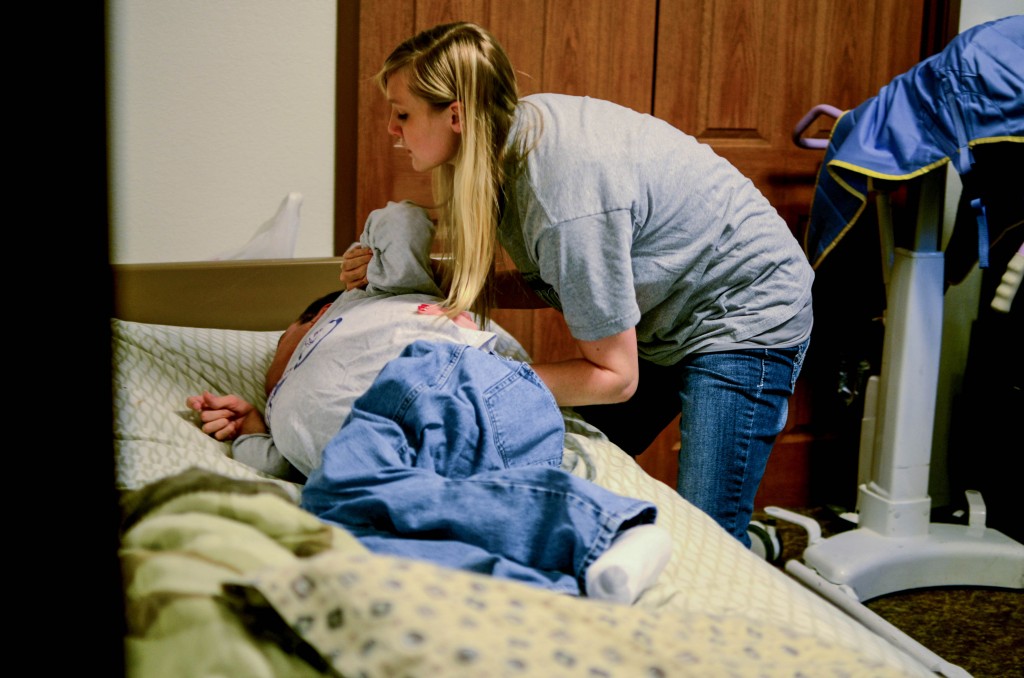 Mount Pleasant resident Bryon Beutler receives help rolling onto his side from one of his caregivers, MacKensye, on Monday, Dec. 3. After being put into bed, MacKensye stretches Bryon’s arms, hands and legs to make sure the muscles are still having movement.