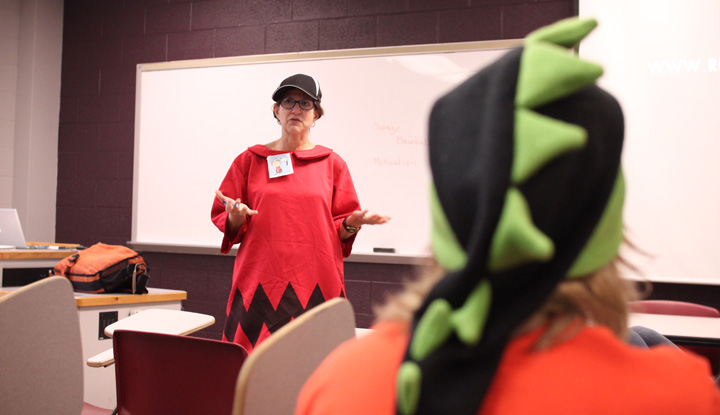 When it comes to Halloween, we usually think of the saying “trick-or-treat,” which conjures up images of young boys and girls going door-to-door dressed up as their best version of fairy princesses and superheroes.

While in the past only children dressed up, young and old people alike have joined in this tradition to show their holiday spirit. Some show it by wearing typical Halloween colors whereas others take it a step further and dress up in costume, regardless of where they may be headed that day.

Associate Professor of the Doctorate and Physical Therapy Program Timothy Zipple calls himself “Mr. Holiday” as he loves this spook-tacular time of year and the holidays that follow.

“Halloween is my favorite because it’s the start of the holiday season,” he said. “Then it’s Thanksgiving, Christmas, New Year’s and so on.”

Zipple gave himself that nickname because he goes above and beyond to showcase his appreciation and love for each holiday.

“My mom was very creative and imaginative,” Zipple said. “She had an antique chest my siblings and I would go through when we were younger to find things to dress up in, like holiday ties.”

Zipple wears a different Halloween themed tie every day during the month of October.

“I think students appreciate faculty who take the extra effort to dress up in order to break up the monotony.”

Another professor who enjoys what Halloween has to offer is Teresa Hernández, an assistant professor in the Journalism Department.

“Students have to dress up as a media character for one of my classes,” she said. “My costume is related to a comic book.”

Hernández created her costume from both a costume that was store-bought and pieces from Goodwill. She is spending the holiday teaching but will be indulging in candy when she gets home.

“I live in a rural area so there aren’t really any kids around,” she said.

While most professors will be in the classroom on Halloween, dressing up serves as a great way to help spread the holiday cheer, even if not in the traditional role of handing out candy.

Alysa Lucas, an assistant professor in the Department of Communication & Dramatic Arts, will be dressing up as a character from the Wizard of Oz and chose to dress up as a way to have fun.

“My students have an exam that day, so it will allow them to focus more on that than if it were just a regular day,” she said.

Lucas got the idea for her costume based on thinking of what pieces she already owned and how she could make something out of them.

“I’ve always wanted to be a character from Wizard of Oz,” she said. “I had a dress to wear already, and then bought shoes and tights to complete the look.”