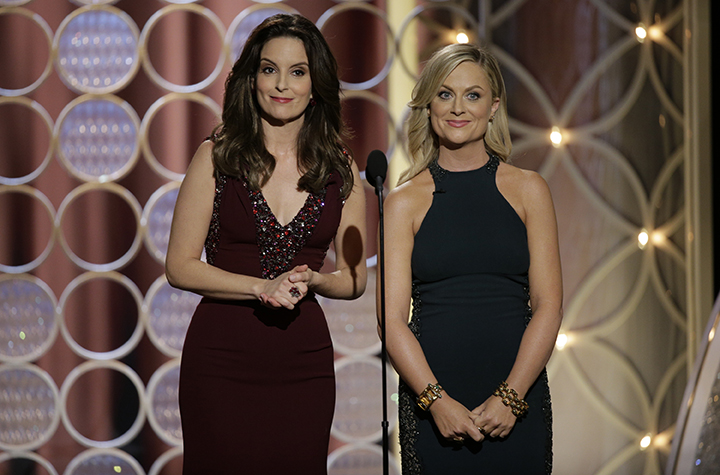 On Jan. 12, the 71st Annual Golden Globes brought together most of Hollywood to honor those in the television and film industry who worked very hard in 2013.

Tina Fey and Amy Poehler hosted for the second time this year, and really lightened a more serious award show. The duo actually helped the show be a little less dull.

They started the night off with their anticipated burn session of all the Hollywood stars in attendance. Matt Damon was called unimportant and “basically a garbage person.” Damon had a hearty laugh and handled the jokes professionally, unlike a certain someone from last year, Taylor Swift.

Fey and Poehler joked about how there is a TV and then a movie side, one in which where they picked on Julie Louise-Dreyfus for being on the movie side for once. Louise-Dreyfus is usually on the “TV side” for her lead roles in “Veep” and “Seinfeld.”

The film that was most nominated this year was “12 Years A Slave.” Other programs that had the most nominations were “American Hustle,” “House of Cards,” and “Behind The Candelabra.”

Jennifer Lawrence was her same-old self and provided everyone with an awkward acceptance speech. She won best supporting actress in a comedy or musical for “American Hustle.” She was out of breath and stumbled over her words. She was cute and bubbly as always.

Some of the entertainers did not always expect their wins and had issues with what they wanted to say. The worse of the night came from Jacqueline Bisset, from “Dancing On The Edge,” and was played off the stage, but that did not stop her. She was speechless when she went on stage and when she began talking, the music was playing.

“Breaking Bad” won best drama TV series and made the win more epic by having Aaron Paul end the acceptance speech with his character’s favorite line.

Alex Ebert won best score for “All Is Lost” but entertained the crowd with a story from Sean Combs about how they met at a party. It was a humorous encounter that lightened up the mood.

Robert Downey Jr. gave a hilarious quip before listing off the nominees and winners for best actress in a motion picture, comedy or musical. He talked about how whoever won the award, he was still going to leave a winner. He then listed over clever and sarcastic comments that had the whole award show laughing.

In between awards, Fey and Poehler would come out and do something humorous. One of their best moments was Poehler as “Randy,” who was Mr. Golden Globe.

Randy was an embarrassed teenager searching for her actor father. It was quite hilarious and had a couple of the actors in the audience involved.

Several actors in the room had their fair share of drinks, but Emma Thompson really showed when she presented for best screenplay. She came onstage with a martini in one hand and her shoes in another.

Thompson yelled, “Where’s the envelope?” and then proceeded to throw her shoes behind her to grab it. Some could see it as funny and unclassy at the same time.

Poehler won best actress in a comedy TV series for “Parks and Recreation” and this was her first win. The best moment of her speech was when she told the room “I never win.”

Woody Allen, who was not present, won the Cecil B. DeMille Award. There was a beautiful tribute to his work and Diane Keaton made it even more beautiful with her personal touch.

It was a night of mostly ups. One of the downs for some of the actors were probably the very long walk it took to get to the stage.

Poehler then ended a successful Golden Globes with “I got to make-out with Bono.”

Here is the official lists of winners and nominees of the night.