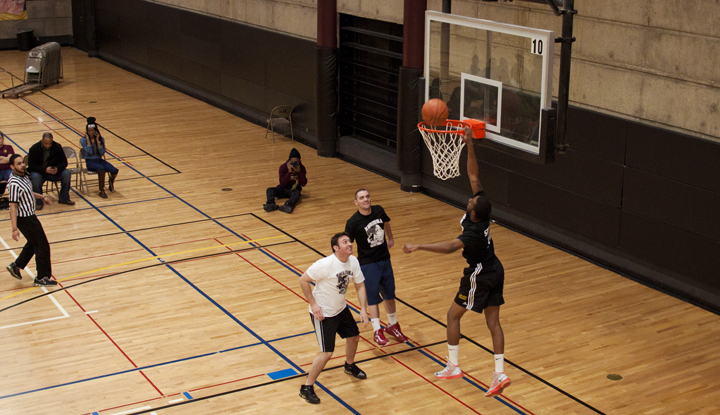 The Office of Multicultural Academic Student Services helped bring MLK Week to a close on Friday, Jan. 24, with a charity basketball game where selected staff of Central Michigan University played against students at the Student Activity Center.

Eris Taylor, a graduate assistant at MASS,  said the idea came from the Assistance Director of the MASS office, D’Wayne Jenkins. Taylor said the office wanted to do something new unlike any other event they did in the past.

“Typically, we do a bowling event and that’s usually held in the Student Activity Center,” Taylor said. “We just wanted to do something different. We know people enjoy basketball games and we wanted to get the staff involved to bring out a bigger crowd”

Taylor said it took a lot of researching to recruit faculty and students for the game. Taylor said he had the goal of making the event as diverse as possible, by pulling people from different offices and organizations.

Jenkins participated in the event by playing alongside several other staff members. He said playing out there took him back to his youth making him feel younger.

“It’s all for fun but sometimes the competitive juices start flowing,” Jenkins said. “I might get the best of you but at the end of the day it’s all for fun. It’s all in the spirit of charity.”

Senior Tamika Williams, a player on the student team, said she was chosen as a representative of her sorority, Zeta Phi Beta Sorority, Inc.

“It was really good,” Williams said. “I enjoyed playing with the staff.  It didn’t get too crazy or chaotic, it was just fun. I was laughing and joking the whole game. That’s probably why I didn’t really score so much.”

Williams said playing for the charity game was a great experience and she enjoyed seeing the crowd fill up the bleachers to support everyone. She said both teams put for great effort during the game.

“They had more youth than we (did) because they were winning the whole first half,” Williams said. “They were two points above us, so I was very surprised. They still got it. So age is nothing compared to skill.”

Williams said she was happy the students came through in the end. She said the students were able to achieve the victory by recognizing what people on the team were good at and building off of that.

“This is our first year doing it and I think the office should continue doing the basketball game because I feel like it can only get better from here,” Williams said.