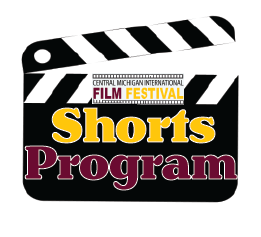 Story and graphic by Maddie Morley

Short films vastly differ from other films and can tell such a strong story in short time. Central Michigan University is hosting their 17th annual International Film Festival Feb. 7-9. The Film Festival program is a collection of short stories from across the US including shorts made in Michigan and others with Michigan roots.

There was a total of 10 short films today. There was a sense of appreciation for every film showed. Each film told a strong story that was directed in new and abstract ways. A few were dedicated to people which left a strong message.

A comedy short, I Love You Moochoo, is about how a husband and wife struggle to deal with the husband’s sister who is living with them.

One of the emotional shorts was Without which is based on a woman who looses her husband and deals with the hard feeling without him while taking care of her baby.

Each film has its own strategic level of interpretation hooking the audience. For instance, Bruised Fruit takes on a whole other meaning. A gay man gets attacked by a group of drunken men in the street for wearing sparkly makeup on his face for St. Patricks Day.

The film starts out with a story of friendship and builds throughout. This film also sheds light on a prevalent problem that others have struggled with before and might still.

One of the highlights of the whole Shorts Program was the film by  CMU sophomore Ben Ackley. His film was called Secretary of the Skis.

The film was edited in an aesthetically pleasing montage that was fun, funny and fresh. Ben says that his inspiration for the short was ’80s culture.

Ackley said his favorite short was License and Registration which is about a fake police officer endeavor that goes wrong.

Sophomore Lilly Sherman also says License and Registration was one of her favorites, too. Sherman said she also enjoyed Now and Not Yet and Bruised Fruit.

After the Shorts Program was over, there was a Q & A with a few of the directors, producers, actors and actresses from the films. All of the people on stage have Michigan roots but some live in Orlando, Florida and Los Angeles, California.