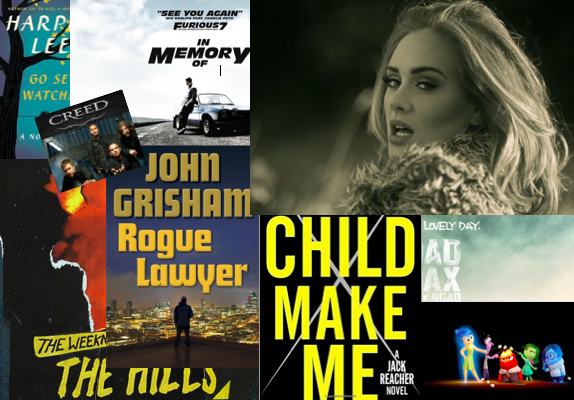 In the past year we’ve survived through the “Watch Me” craze and the “Fifty Shades of Grey” phenomenon with the much-anticipated rediscovery of a galaxy far, far away.

As 2015 comes to a close, one of the best year-end festivities is to read the articles and watch the videos showcasing the highlights of the year.

So, let’s turn back the clocks and talk about the very best music, movies and books of 2015.

It’s amazing how Harper Lee never wrote another book after the legendary “To Kill a Mockingbird,” but his silence came to an end in 2015.

Many people picked up this book purely for curiosity’s sake to see what the author had to say, but it is definitely worth the read even if you have never heard of the original work.

“Make Me: A Jack Reacher Novel“ by Lee Child

We unfortunately live in a world where there is no upcoming Tom Clancy book in sight.

For the folks looking for an alternative and new adventure, we highly recommend the Jack Reacher series.

While the series isn’t brand new, it has the benefit of being the type of series where you could pick up any book and get into the story with no clue of the history of the plot. It is action-packed and a great piece within a great series.

When you have such a prolific career spanning several decades, your bibliography tends to be hit or miss, no matter what.

However, Grisham’s book of 2015 is definitely a hit.

With a strong and wacky protagonist, Sebastian Rudd is one character you’ll enjoy getting to know throughout the pages of this novel.

The fact that this summer blockbuster is a strong contender for best picture at the Oscars in early 2016 speaks volumes about its content.

With fantastic directing and acting, in addition to breathtaking cinematography, you’ll be hearing about this movie for many years to come.

This animated film is arguably the best Pixar movie since “Up.”

While “Mad Max” pumped adrenaline through our veins, “Inside Out” was busy tugging at our heart strings.

It has a great plot, great characters and is a story that reminds us all that it’s okay to still be kids at heart.

Who would have thought we would get the best addition to the “Rocky” empire almost forty years after the original?

Truly the biggest surprise of the year, this movie was looked at as a through and through underdog story compared to “Rocky” and a top contender among 2015 sports films.

Michael B Jordan is a promising up-and-coming actor and the beloved Sylvester Stallone gives his best performance in years.

“The Hills” by The Weeknd

Album: Beauty Beyond the Madness

This year was a big one for Abel Makkonen Tesfaye, A.K.A. The Weeknd.

His album had huge sales and “Can’t Feel My Face” was one of the biggest hits of the summer.

However, his other hit single this year was our personal favorite. It was dark and eerie, yet very catchy.

We look forward to seeing what the future will hold for The Weeknd.

A touching tribute to the late Paul Walker, this song dominated the radio throughout the spring and early summer.

Even without the backstory and its ties to the “Fast and Furious“ saga, the song is still uplifting and a catchy tune.

It’s the best Wiz Khalifa has sounded in years, and is a great introduction of Charlie Puth to the mainstream. Anyone who has ever experienced a loss can relate to the melody of this song.

Last, but not least, the year’s hit track from the queen of pop music – Adele.

People like Taylor Swift or Justin Bieber can come and dominate the pop charts all year, but the moment Adele releases a new track, we are all reminded of who is the true leader of the genre.

There’s a reason why this song is dominating the radio currently and is all over end of the year lists, despite the song’s debut just prior to the year’s end.

It’s beautiful, tragic and sung by a woman who has the voice of an angel (in our opinion).