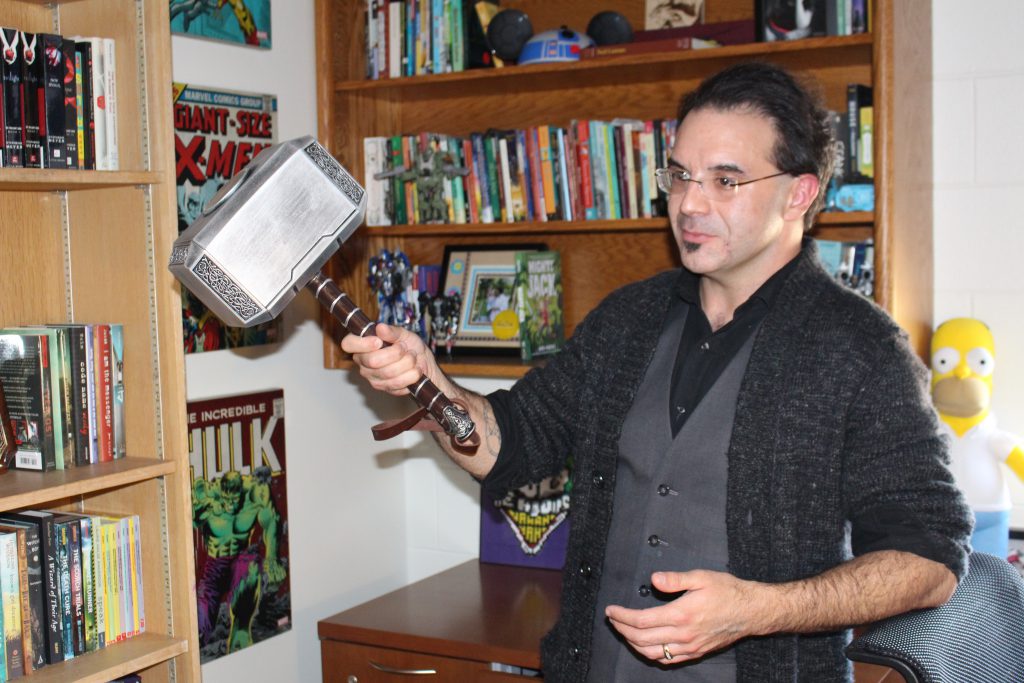 A Thor hammer and Captain America shield sit on a shelf in Central Michigan University professor Joseph Sommer’s office. He’s got a Dr. Who cosplay coat along with other full cloaks hanging on his hooks. Photos of his family are spread out with the likes of Harry Potter books and a vintage Hulk poster. If that doesn’t describe Dr. Sommers well, nothing does. 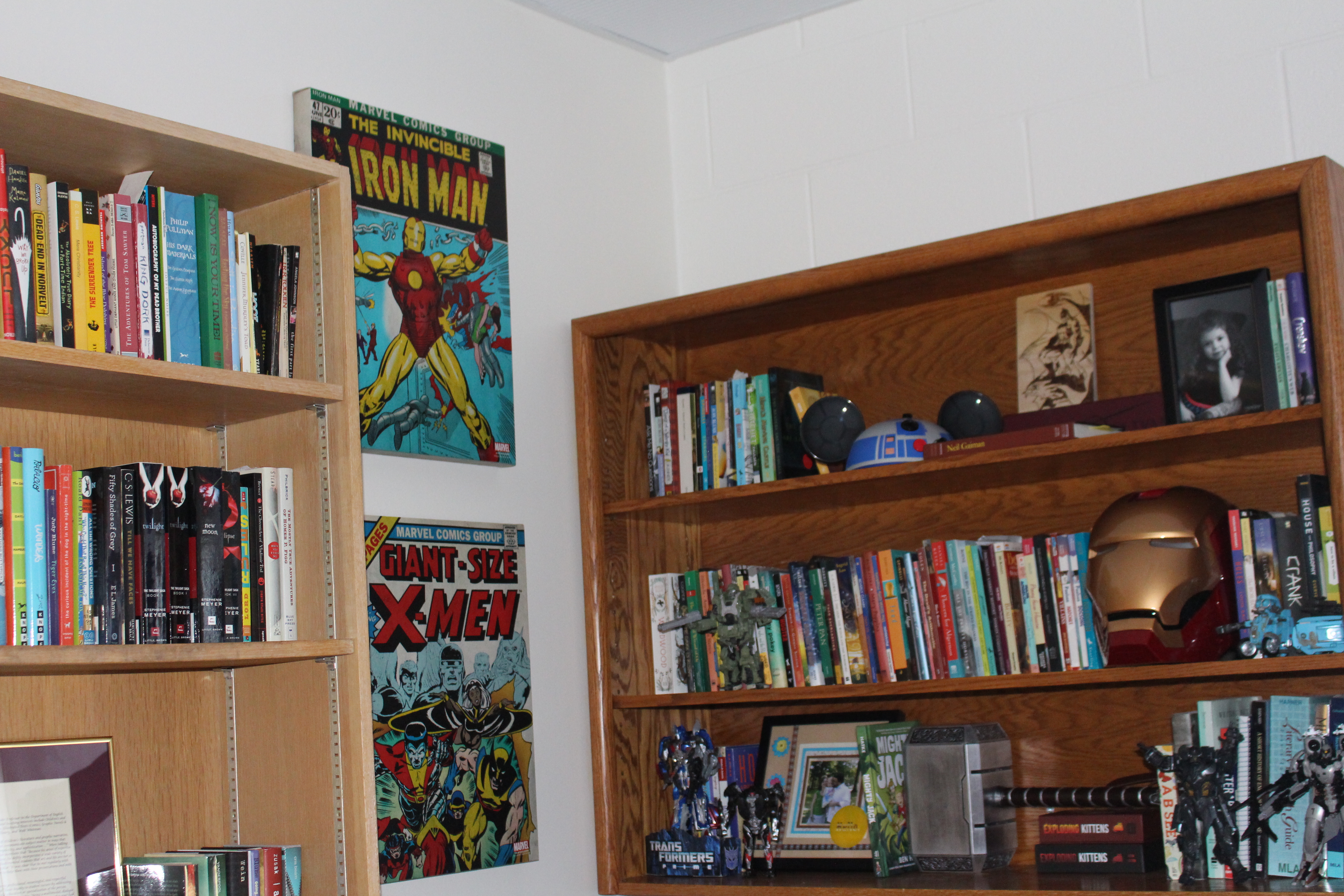 Dr. Sommers is a man of many words, which is typical of the English professor kind, so it may be surprising that he gravitates toward a medium that uses more pictures than words.  For Sommers, comic books are his literature of choice, and quite frankly, his entire life. So much so, he teaches a course on comic books and graphic novels at CMU. He designed the course and textbook himself.

Sommers’s first comic book was Marvel’s “Squadron Supreme.” He said he was home from school sick when his mother came home with the edition. Sommers recalls it as “light reading” that would eventually dictate his entire career and lifestyle.

“I was around six or seven years old I think, and it just blew my mind. I read and reread that thing until it fell apart,” Sommers said.

“And then I began to check out the comics in the turnstiles at the grocery store while my mom shopped, and I read them in the library, and then I became a regular at our comic books store in town.”

Sommers said he still owns every comic he has ever bought, which he estimates may be up to 15,000.  Growing up in Chicago, many of his friends and family were more into sports than cartoons or comics. Though he said the Michael Jordan era left him interested in sports too, he was a “weird” kid at heart.

“It was my own little private part of my being that I generally kept to myself with after school cartoons and Saturday morning ones as well,” Sommers said.

Now that Sommers is all grown up (relatively), he embraces the pop culture and comic books fully. Central Michigan University Colleague Ted Troxell said Sommers and him hit it off through their sense of humor.

“He brings the crazy a little bit. It’s unpredictable and fun,” said Troxell.

Sommers recalls it as humorous, Troxell took it with a grain of salt.

“He could have brought his Captain America shield, or something else that would attract more attention,”  Troxell said.

In the same way Sommers is confident enough to dress in Dr. Who garb to officiate a colleague’s wedding, he brings that same energy into the classroom. 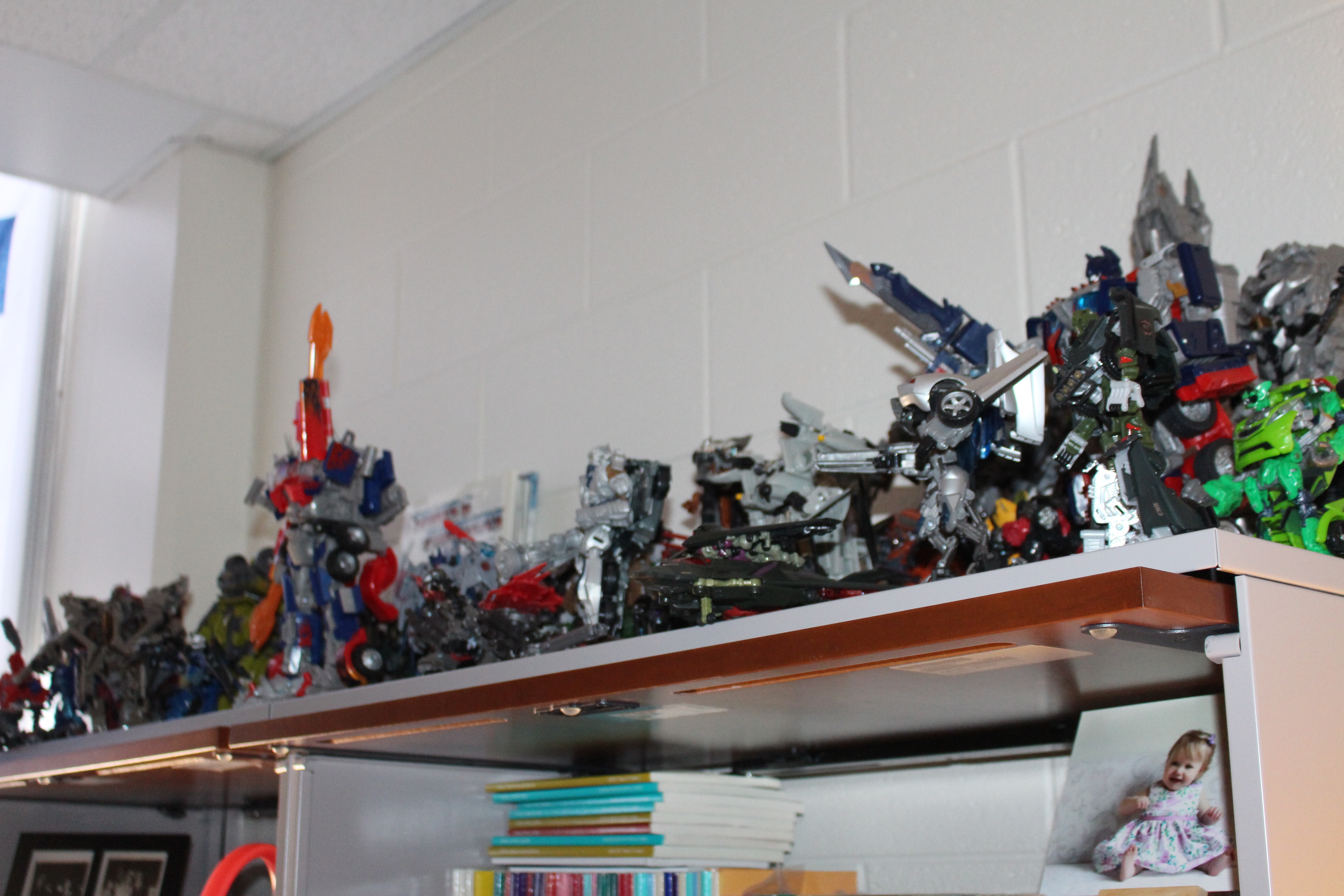 “I’m passionate about my teaching because it’s not about me, it’s about the connivance and comprehension of information and helping the student making it meaningful in some capacity,” Sommers said.

Sommers said he doesn’t know what his ‘teaching style’ is. He said he just, “acts like me.” That means being passionate about pop culture, and making the material relevant to every student. 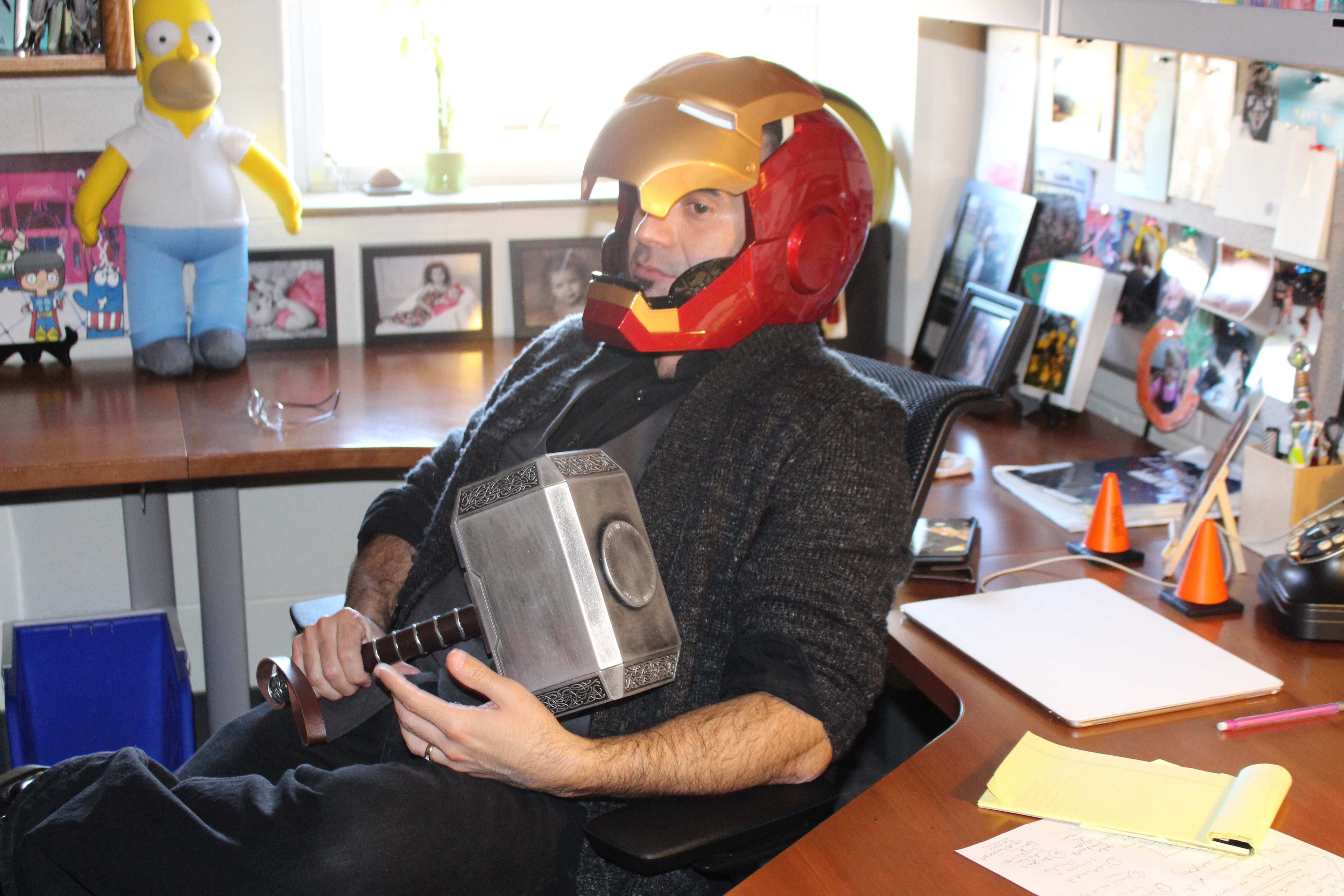 “I want my passion to be infectious, I want them to develop a fever for the things we’re talking about and doing.”

Marvel is a favorite of the professor’s, which makes sense, considering that was his first comic book, and he gravitates toward fantasy, as opposed to other subgenres.

Marvel has also been cranking out a grand superhero following with hit movies like “The Avengers,” with characters Captain America, Iron Man, and Thor.  Upcoming movies include “Avengers: Infinity War Part 2,” “Captain Marvel” and “Black Panther.” Sommers said being a comic book “nerd” may have been looked down on in years past – but not in this day and age.

“Comics are the single most mined medium we have operating run this moment. Like movies, video games, comic books, books based on comics, action figures, cosplay — you name it; comics are in to it right now. Heck, being into comics right now is about as cool a thing as one can be within in popular culture,” Sommers said.

A large reason Sommers is so hyped about comic books and all things pop culture, is that he now gets to share it with his two daughters. He said they get to enjoy the same things as him, and geek out over movies and cosplay together.

Sommers has two books of his own coming out within the next year, both of Neil Gaiman, the author of the comic book series The Sandman.

In one of the books, Sommer’s daughter helps interview Gaiman.

An earlier version of this story incorrectly reported a Thor mask to be in Sommer’s office. It is, in fact, a Thor hammer.