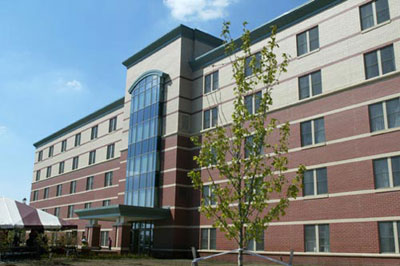 There even is a myth about a curse that if students walk over the C on the sidewalk between Moore and Dow that they would become a fifth year senior. But what likelihood do students here have at graduating in four years? Is it really a curse or the reality of this “four year university?”

According to the data collected by the Office of Institutional Research at CMU, students are more likely to graduate in five years or more, making fifth year seniors the reality.

The OIR reported that students that came to CMU as freshman have a 24.4 percent chance of actually graduating in four years or less. The first time freshmen have a 50.8 percent graduation chance in five years or less and the longer they stay the more likely they are to graduate.

Students that transfer to CMU have the graduation rate of 29.3 percent in three years, which increases the longer they stay.

Andrew Taylor, Harbor Springs senior, is an Information Technology major with an ASL minor that transferred to CMU in 2014. He came to CMU with more credits than a sophomore, but not yet enough credits to be counted as a junior.

This year is his second year as a senior at CMU, making him a fifth year senior. Taylor said he will be a sixth year senior next year since he is not able to graduate this May.

Taylor said his plan never included being at CMU this long. He said he had changed his major a couple times, which caused his degree progress to take longer than he had originally intended.

“I started out an education major, but realized I had an overly romanticized idea of what being a teacher would be,” Taylor said. “Then I changed to computer science, this was closer to what I wanted to do but it was focused around coding too much.”

Taylor said that the stigma of becoming a fifth year senior shouldn’t deter students from changing their majors.

“In the grand scheme of things, being in school a little longer to end up doing something that you will love every day is worth it,” Taylor said. “I personally stressed myself out when I first changed, I spent two years studying to be a teacher and I would have been done by now if I had stuck with it. But looking back I am glad I made the change. I have a future that excites me for what I am going to be able to do.”

Pamela Baldwin, Ortonville Senior, is one of the few that will graduate from CMU with a total of four years spent in college. Baldwin transferred to CMU in the fall of 2016 as a Junior.

Baldwin said she spent her time at community college taking about 12 credits a semester, but also either was a part-time or full-time student during the summer. She said when she got to CMU, she did 15 credits every semester.

“It was definitely challenging trying to do it in four years and I had to sacrifice my summers every year, but it’s nice being out of undergrad in four and being able to move on to graduate school as soon as possible,” Baldwin said. Baldwin is majoring in Biology-Pre-Professional and will be heading to Veterinary school after she graduates from CMU.

Baldwin said there is a stigma surrounding staying longer because people feel like they are failing if they don’t finish within four years. She said there are reasons though that people can’t do it and it’s not because they failed, but because life gets in the way.

“I think it’s unfortunate that people are ashamed of being a fifth year senior,” Taylor said. “We are told that we are all supposed to be allowed to do things at our own pace but if you don’t fall under this specific set of “rules” you haven’t done it right. I personally can’t handle the amount of credits that it would have required me to take for me to graduate in four years, not on top of working a job in order to pay for things to live.”