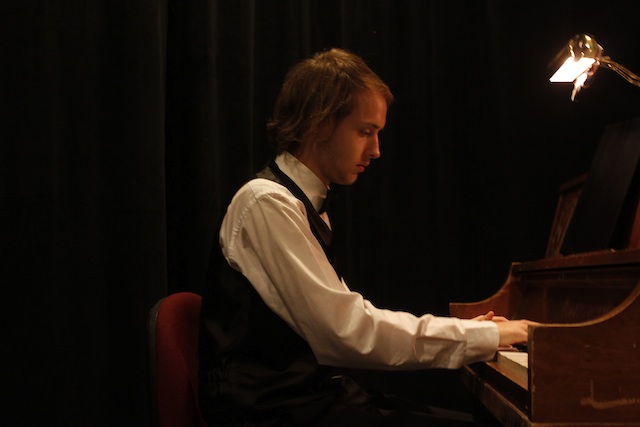 To music major Spencer Harrison, music is something that courses through his veins. He lives, breathes and eats music. It’s something that has become intensely prevalent in his life. He recently had the chance to compose the music for slam choreopoem “The Unsaid,” which was shown this past weekend.

“This is the first time I’ve written for an audience,” he said.

He had always written music that only he had opinions of, never having to write anything to cater to the mind and interpretations of a crowd. This was a learning experience for him. The collaboration with other cast members helped him grow as a musician and gain experience and knowledge. He had to realize that this wasn’t music for him, he was just accompanying the play.

His goal was to enhance the poetry that was already written. His music layered every poem with the perfect emotions and only intensified the emotions that the watcher felt.

The play itself was a form of slam poetry. Each actor had a story about dealing with the loss of a loved one and their stories of learning to cope with such tragedy. Most of the actors and actresses are a part of the slam poetry club, and learning to take the rhythm out of their poetry was a learning experience for them as well as it was for Harrison to add rhythm in. The collaboration was a phenomenal learning experience for all members.

For Harrison, it was an entirely new world.

“It really opened up my mind,” he said. “I realized wow, this music is not going to be solely my own anymore. It makes me kind of sad but the only way I can ever write an opera, symphony, or orchestra et cetera, is through collaboration.”

The process of forming emotions into music was a fun and interesting experience for Harrison. He would begin by recording the script, and then would sit down at a piano listening to the read-through, figuring out what fit each individual mood and story.

“I read the poem, see what it’s about and through that I’m able to write music to it,” he said. “I could hear the music while I’d read the poem. It’s just a matter of putting it on the piano and experimenting with it.”

All the music was piano, and this was another challenge Harrison was faced with. He would hear different instruments that he wanted to imitate, and making these sounds on the piano was an interesting task he had to conquer.

The play would be significantly different without the music that he contributed.

When asked about how a play would be without music, Harrison replied, “Even poetry is music, even if there’s not pitches, there’s a certain rhythm. The music makes the play much, much, better though.”

As well as contributing music, he incorporated silence into the play as well, as a form of music that he felt was best for the play at that moment.

The music was a puzzle piece that held the entire production together; even the actors were impressed by Harrison’s creations.

“The first time I played the music every single one of them except one cried, and he was just smiling the whole time,” he said.

“The Unsaid” was a success, the music and the stories presented were heart-wrenching and raw. Harrison’s music matched it to perfection and helped create the magnificent performance that it was.