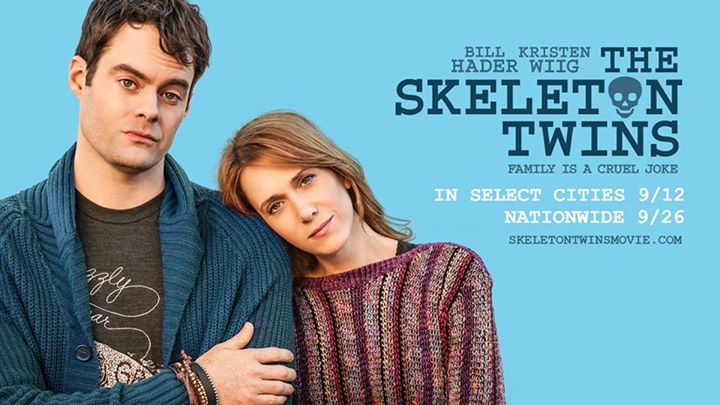 In 2014 we saw the release of some terrific films. We met the “Guardians of the Galaxy,” spent some vacation time at the “Grand Budapest Hotel,” played with some Legos and even went into space on an “Interstellar” adventure.

Naturally, some films received more hype than others. Many were awaiting “The Hunger Games: Mockingjay – Part 1,” the third film in the “Hunger Games” franchise for two years, and practically every time we turned on the television we saw trailers for “The Hobbit.”

Beyond these highly publicized hits of 2014, plenty of great indie films released this year went almost completely unnoticed. “Mommy,” “Under the Skin” and “Dear White People” are just a few examples. One film that particularly stuck out to me, however, was “The Skeleton Twins.”

This film stars “Saturday Night Live” alumni Bill Hader and Kristen Wiig as estranged twins Milo and Maggie who are brought back together when their separate suicide attempts both fail.

Hader and Wiig are arguably the greatest products of “SNL” in the last decade, and both are well versed in comedy, making this very somber topic strange for two very funny people to take on. But it works.

Both actors also star in movies such as “Adventureland,” “Knocked Up,” “Forgetting Sarah Marshall,” “Paul” and “Her.” Wiig shines as the unraveling maid-of-honor in “Bridesmaids,” and although Hader hasn’t really had a leading man moment yet (besides voicing the main character Flint Lockwood in “Cloudy with a Chance of Meatballs”), he is memorable as the silly and rather unprofessional Officer Slater in “Superbad.”

“The Skeleton Twins” gives these two hilarious souls a chance to show a more serious side.

The characters Milo and Maggie, who have not spoken for 10 years, are immediately thrown into a tumultuous situation, but both still hold on to the hope that they will resolve the issues that led to their disconnect all those years ago.

If we didn’t know better, we would think Hader and Wiig were actually siblings based on this performance. Hader even comments on their sibling-like relationship in the DVD’s special features. After working together on “SNL” for seven years, a connection clearly developed.

Wiig, as usual, does a terrific job and her character has a lot of depth. After Maggie invites her brother to stay with her, she has to deal with her own depression, her brother’s suicidal tendencies, and some serious relationship problems with her mother and husband. Wiig handles the role well, showing her layers as a dramatic actress and revealing her comedic side when needed.

The surprise performance in the movie comes from Hader. He is very believable in his portrayal as a gay man, but then again, we already knew that thanks to his lovable character, Stefon, on “SNL.”

Hader excels in all aspects of the film – comedy, drama and those areas in between – making him the standout actor in my opinion. Having never seen Hader in such a serious role, his performance shows that he clearly has the ability to be a leading man in any genre.

The brother and sister relationship is truly the heart of the story, but “The Skeleton Twins” also feels so genuine because the issues brought up are those same issues you may have experienced yourself or have seen secondhand. Craig Johnson and Mark Heyman, who spent more than seven years writing “The Skeleton Twins,” wanted to make a film that was truthful – something they would want to see if they were audience members. And their hard work payed off, as the film won the Waldo Salt Screenwriting Award at the Sundance Film Festival in 2014.

I can’t praise this film enough. There are a few heavy moments that may be difficult to watch for some, but the addition of comedic scenes (including one where the siblings are lip-syncing to a popular ’80s song and another when they are getting high at the dentist) will put a smile on your face. As Heyman says in the DVD’s special features, “this movie gives you permission to have a sense of humor in life and to laugh in the face of the dark stuff.”