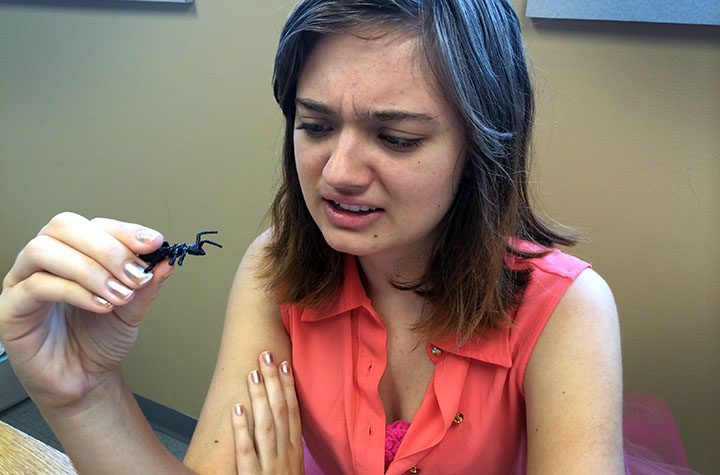 Everyone has that one food that makes their stomach turn.
While some foods are more apparent others may not be so obvious and really boil down to different taste preferences.

So if you think you have a strong stomach and are brave enough, we’ve compiled a list of foods and beverages from around the world that really push the boundaries of what we as a society consider edible.

These foods are sure to make your hair stand on end — and just in time for Halloween. Join us for a horrifying tour around the world that will surly make you do a double take next time you dig in while dining out.

Haggis might sound more familiar to you than some of the other foods featured here but some of you might not know what it’,s actually made of. Haggis is a savory pudding that contains sheep’s liver, heart and lungs.Now if the thought of consuming an animal’s organ meat doesn’t sound somewhat off putting to you, here is the kicker: it is traditionally encased in a sheep’s stomach lining. I’ll let that settle in.

While Haggis sounds unappealing by description, it is actually quite popular in Scotland. They even use it for pizza toppings and many fast food restaurants serve it with a side of fries like an American cheeseburger combo.

12 | Lutefisk – Norway
Staying in Europe we now move to Lutefisk a very popular dish in Scandavian countries. While eating fish is OK for most people, it is how this fish is prepared that has a major gross out factor.Lutefisk is soaked in water and lye for a little over a week.

In case you didn’t catch that, it is soaked in a mixture of water and lye. Lye is a poisonous liquid that can cause your esophagus to narrow.

Clearly people aren’t poisoned from eating Lutefisk, but the thought of ingesting a potentially poisonous substance doesn’t sound very appetizing, does it?If that doesn’t make you want to go out at try some lutefisk perhaps this will: it is described as having a gelatinous texture and an extremely stinky smell accompanying it.

Here is another one that might sound pretty familiar. Some people call it caviar and other call it fish eggs. Salt-cured fish eggs, to be exact. Caviar is thought to originate from the Caspian sea but it is served all over the world now.If the thought of eating an animal’s eggs doesn’t gross you out, how they harvest caviar will: the unlaid eggs of fish are extracted from inside it’s roe – a fish’s egg filled ovary – after the fish is caught and killed.

10 |  Elephant Dung Beer – Japan
No, you didn’t read this wrong: elephant dung beer. Apparently this brewery called Sankt Gallen in Japan got this brilliant idea to brew beer from coffee beans that have recently passed through elephants. While there is no actual elephant poop in the beer, just thinking about the journey those coffee beans took to get inside that beer bottle will make anyone shudder.
Though, apparently according to Fox News, they aren’t that bad.
9 | Baby Mouse Wine – Korea
Baby Mouse Wine is exactly what it sounds like; newborn mice put in a bottle of rice wine while they are still alive. Afterwards it is left to ferment before being served. This doozy of a beverage is considered good for your health and is very popular in Korea – although you’d only be guessing why as it is described by many to taste like gasoline smells.
And you thought drinking the worm from a tequila bottle was weird!
8 | French Fried Caterpillars – Mexico
While many other countries eat bugs that trend hasn’t caught on in the western world which is why French fried caterpillars make this list. Caterpillars are quite often consumed in Mexico either fried or boiled and are a very popular source of protein south of the border. According to the St. Petersburg Times, many bugs found in Mexican cuisine have twice as much protein as other types of meat like beef or chicken.
Though eating dishes feature creepy crawlers is wildly popular in Mexico, people originally started eating them due to living in poverty.
7 |  Snake Meat Soup – Hong Kong
Indiana Jones isn’t the only one afraid of snakes. With their beady little eyes, the way they slither, not to mention some of them being poisonous – it’s understandable why many nightmares involve snakes.
Do you know who isn’t afraid of snakes? Hong Kong.  Hong Kong’s version of chicken noodle soup is snake soup.
Shredded snake meat is boiled in a soup and served up and is a beloved treat. Just in case you aren’t a fan of soup, snake meat is served a lot of different ways in Hong Kong, including fried snake meat and snake meat casserole.
Oh, and it apparently tastes like chicken. Doesn’t everything though?

Raw… Blood… Soup.
It is a popular breakfast dish in more rural parts of Vietnam. The blood of ducks or geese is left to congeal in the fridge and is topped with fresh herbs and served chilled.
Drink up!

5 | Deep Fried Spiders – Cambodia
Looking for a delicacy to try next time you are in Cambodia? Look to any street with food vendors and you’ll probably find the deep fried spider being served up.
Apparently the people of Cambodia have never seen Arachnophobia.

The deep fried spider is typically considered a snack in Cambodia but don’t worry – these aren’t small spiders being served up but a type of tarantula.

Just in case you have forgotten what a tarantula looks like, here you go.  You can thank me later.

4 | Semen Cocktails – New Zealand
Let’s file this one under F for I wish I could forget this ever existed. Someone in a bar from New Zealand woke up one day and decided to start serving apple flavored horse semen shots.
According to Oddity Central, not surprisingly the drink is not very popular with the bar’s men patrons.

For those of who you don’t speak Japanese the word Fugu translates to ‘putterfish’. Fugu is a very popular food in Japan but can be lethal if not prepared correctly.
As you can imagine the preparation of Fugu in Japan is strictly regulated by law but there are some accidental deaths in Japan due to people preparing the puterfish incorrectly at home.
Incidentally, the most revered part of the fish is the liver but it is also the most potentially poisonous which is why serving the liver is banned in Japan.
2 | Extracto De Rana – Peru
Extracto De Rana sounds pretty exotic and interesting but it is essentially a frog smoothie. Now it is clear why frog legs didn’t make the this list, right? To create Extracto De Rana skinned frogs are blended with other chosen ingredients like honey, malt or wine.
This drink is insanely popular in Peru and many drink it in the morning in lieu of coffee or orange juice. Residents of Peru say that the drink gives them strength, energy and additional health benefits.
After all, nothing says good morning like a tall, cool glass of frog juice.

Do yourself a favor and never Google balut; the images will haunt you.
This is dish that is very popular in the Philippines and other parts of Asia. Balut is a fertilized duck egg that has been boiled and is typically eaten in the shell. In other words, it is a baby duck boiled alive in its own egg.
Uncomfortable yet? Good.
Happy Halloween!