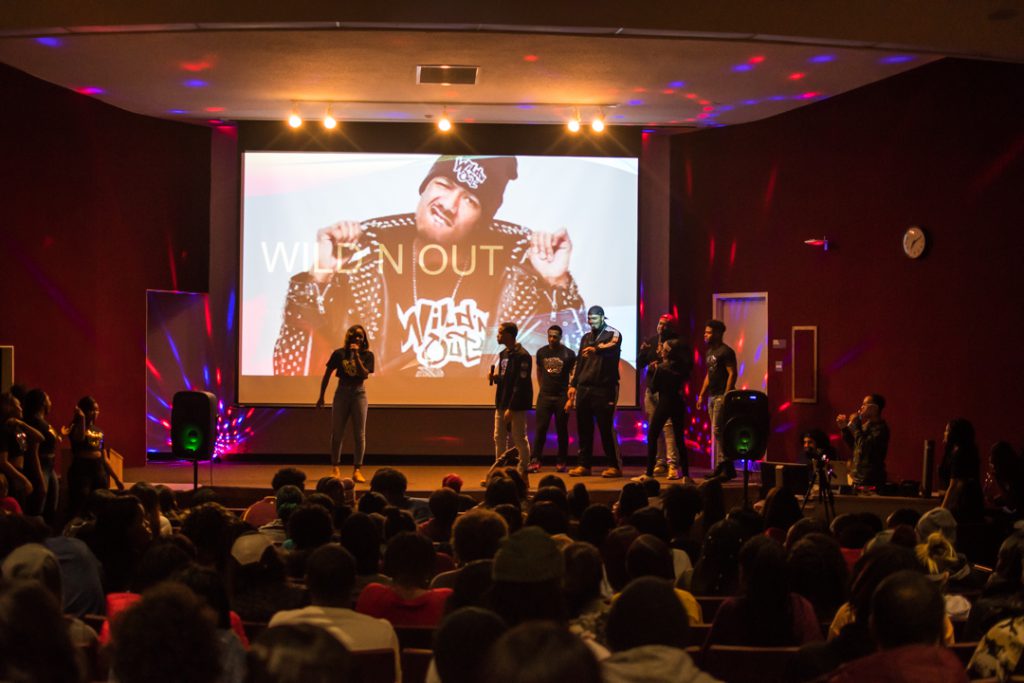 Justus League and the Organization for Black Unity (OBU) held their version of Nick Cannon’s Wild ‘N Out, a popular television show filled with improv comedy, one on one joke battles and freestyle rapping.

Detroit junior, Bishop Bent, was one of the performers for OBU. He said he had a good time at the event.

“The whole thing was smooth even though we didn’t have that much time to practice,” Bent said. “Everyone on stage was funny and I don’t regret anything. I’d do it again.”

St. Louis, MO sophomore, Elijah Hankerson, is the Event Coordinator of OBU and helped out with the behind the scenes preparation as well as supported his fellow members. He said this is his first executive board position in an organization and he liked the experience.

“It was really fun collabing with everybody and making this thing possible,” Hankerson said. “I feel that the event went by so well. I’m glad so many people came out, and I’m glad that all the performers had the courage to go up on stage. I really appreciate everyone for coming out and being part of the event.”

New Haven senior, Taraj Livesay, one of two Vice-Presidents of Justus League performed for the organization. As an avid performer and rapper with the organization, he felt comfortable on stage and was one of the biggest point scorers from both teams.

“The event was great. We went up and surprised the crowd. Had good games, had a lot of good jokes, bad ones too, but that even happens on the show. All-in-all it was fun to be a part of,” Livesay said.

Livesay said their preparations consisted of trying to anticipate large crowds for jokes to reach them, practicing the week before, rehearsing, and then going for it.

Overall, he said he was happy for the organization for winning the competition.

“I was the one that gave the strongest blows,” Livesay said. “It was really dope. Our team really schemed and planned our responses and gave out funnier jokes. We just had a good time.”

The presidents of both organizations said they were happy about the performance and be happy to collaborate again.

Detroit senior, Niya Townsend, is the president of OBU. She said she felt the event went well.

“It’s kinda sad that my team lost but it’s okay because everyone seemed to have fun, the crowd was participating, laughing and joking so, I think it was pretty successful,” she said.

Townsend said she likes collaborating with Justus League because of the cooperation between the two organizations.

Detroit senior, Ahsha Davis, has been Justus League’s president for the three years. She said the past few years, her organization has been collaborating with OBU on multiple events.

“Each year we collaborate on about three to four big events,” she said. “And a few little ones, probably seven in general.”

Davis said the event went well even with the challenge of emulating the show.

“Wild ‘N Out is kind of hard because it’s hard to tell someone to get on stage, be funny and have a beat to it,” Davis said. “I had a lot of fun listening to them and watching the crowd interaction.”

Davis said her favorite part of her last Wild ‘N Out was seeing the crowd interaction between both organizations.